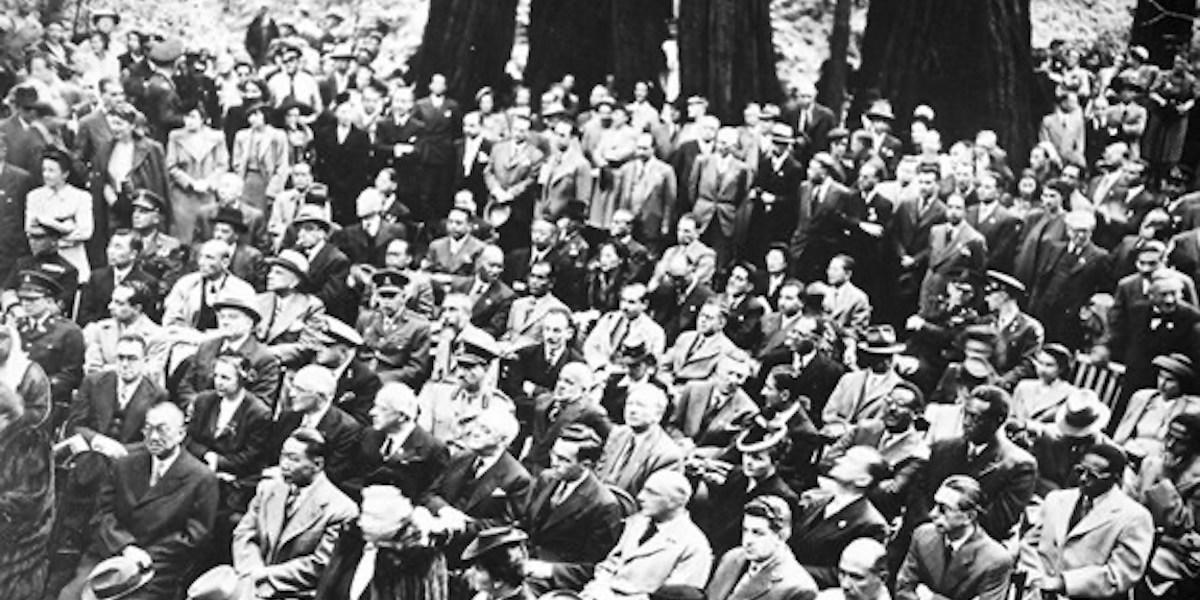 Dignitaries gathered in Cathedral Grove at Muir Woods to remember FDR. Courtesy of Save the Redwoods League

The rings of a redwood record everything.

If you stroll the boardwalk at Muir Woods, you’ll encounter an old-growth cross section with rings labeled for the year of the California Gold Rush and the Declaration of Independence. But the national monument itself has played host to historic moments, perhaps the most significant of which was 75 years ago this spring.

May 19 marks three quarters of a century since diplomats from across the globe ventured into the redwoods to honor the memory of President Franklin Delano Roosevelt. It was a moment when nature helped humankind gain perspective and strength during a time of global fear and distrust, and it echoes today.

As World War II wound down, representatives from 51 nations gathered in San Francisco in the spring of 1945 to add momentum to a growing spirit of cooperation at the United Nations Conference on International Organization.

In the days leading up to the two-month conference, Save the Redwoods League and then-Secretary of the Interior Harold Ickes suggested breaking up the meetings by holding a reflective unity gathering in a natural “temple of peace” among the redwoods.

“The delegates would gain a perspective and sense of time that could be obtained nowhere in America better than in a forest. Muir Woods is a cathedral, the pillars of which have stood through much of recorded human history,” Ickes wrote to Roosevelt in February of 1945. 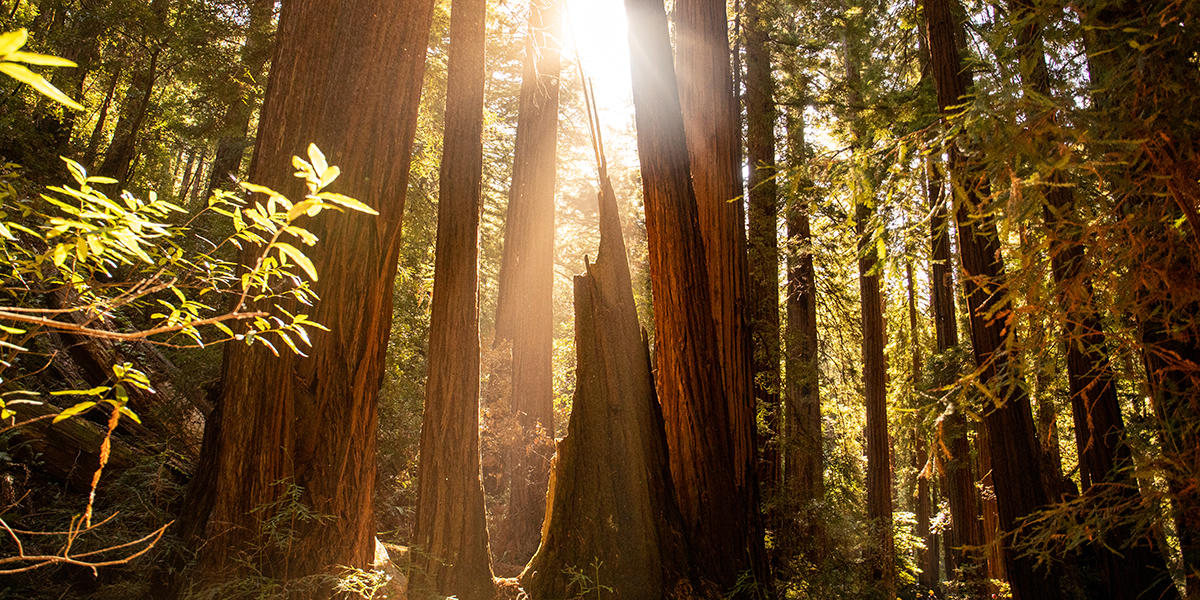 Roosevelt was a receptive audience. He was passionate about forestry and conservation, but he would not live to visit the Cathedral Grove at Muir Woods. The man many consider the chief architect of the UN died of a stroke on April 12, less than two weeks before he was due to open the conference.

The event in Muir Woods quickly became a memorial for the longest-serving president. On May 19, 500 delegates representing 46 nations crossed the Golden Gate and entered the cathedral to witness the healing power of nature following one of the darkest chapters in human history.

“Our civilization is trying to find a new relationship to nature; one where we are not just spectators, nor are we exploiters,” says Felicia Chavez, president of the Marin County chapter of the nonprofit United Nations Association. “In the future I hope that we will find ways to actively occupy places like Cathedral Grove, not as exploiters or passers-by in a museum, but as intimate partners in the ecosystem on an ongoing basis. Holding this important ceremony in 1945 in Muir Woods is one way we have positioned ourselves as participants.”

On the day of the memorial, the grove was filled with the sounds of international speakers and even a performance by the Navy band, but Cathedral Grove has more recently been designated a quiet zone in the park, allowing the space to better work its restorative magic.

“Shelter-in place” protocols have curtailed plans for a formal ceremony marking the 75th anniversary, but the UN Association has produced a series of videos to remind people about the event and nature’s ability to connect us through shared purpose.

“I think the reverence with which we hearken back to this event is evidence that this was a wise choice on the part of the organizers,” says Chavez. “I can't help but speculate how it would shape modern Western consciousness if we were to hold a far greater number of important gatherings in natural settings—ensuring the setting was an active participant and not just a passive backdrop.”

Future generations of visitors to Muir Woods may someday identify redwood rings marking the founding of the UN, or the year COVID-19 kept shuttles full of visitors away. Through ecological restoration programs like Redwood Renewal, the National Parks Service is working to ensure that those visitors will encounter a thriving ecosystem in which to participate.