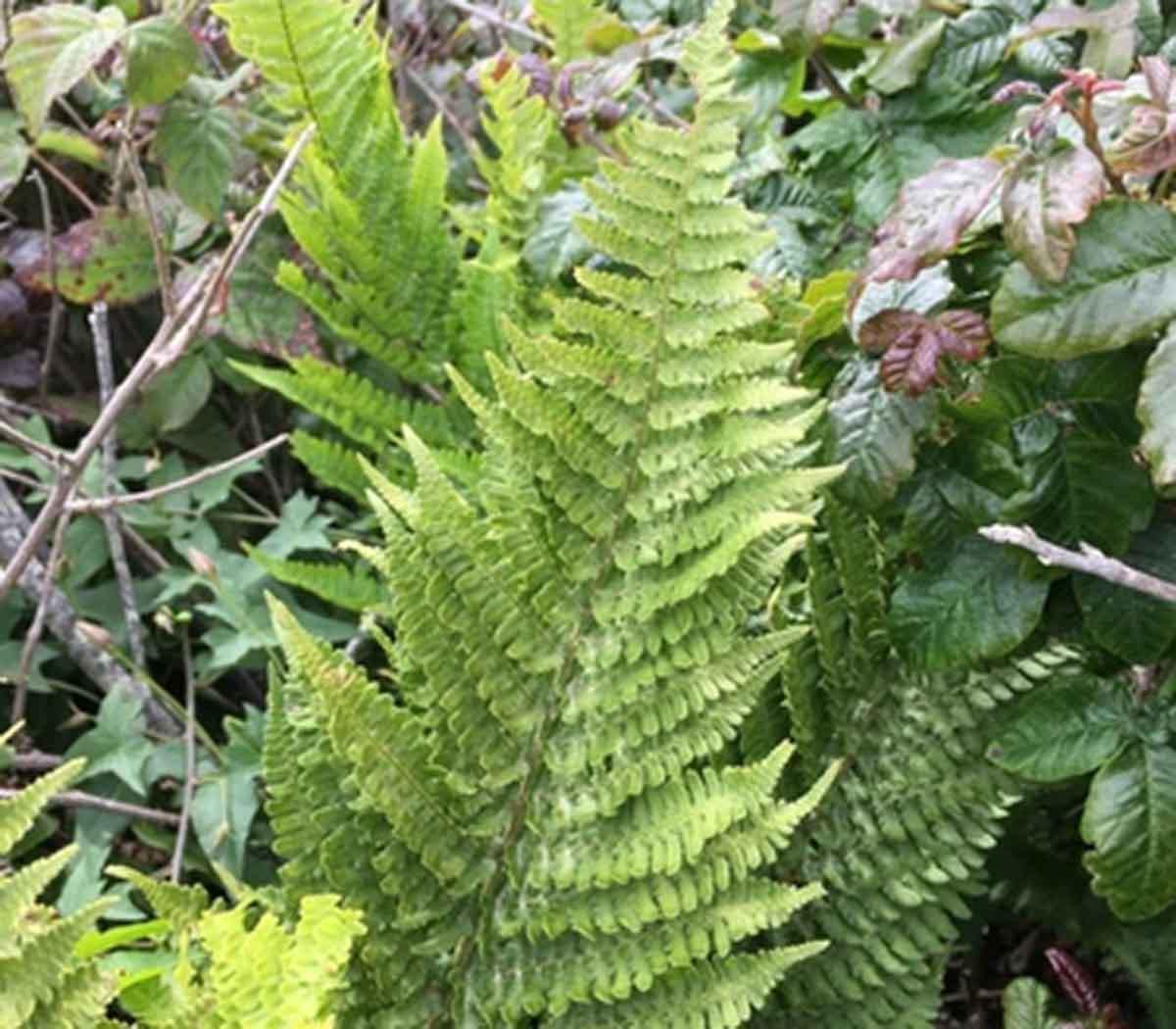 If you take a walk along the Coastal Bluffs in the Presidio and stop just south of the Langdon Court parking lot, across from the battered bunkers and under the pine trees, you’ll find a plant that often goes unnoticed. Right there at your feet will be dozens of Polypodium californicum, or California polypody. So what is it about these wonderful little ferns that made me want to run out and get myself a fern that I could wake up to every morning?

Ferns have been around for a long time—the first ferns appeared easily around 360 million years ago, according to UC Berkeley’s Paleobotanical Lab. Globally, there are over 10,000 species of ferns and 35 of them call the Bay Area home. Some of these include Christmas ferns, Bracken ferns, and Goldback ferns. Ferns love rain so if you go hiking in the winter around the Golden Gate National Parks you’re sure to run into some.

Though each species of fern is unique in its own way, there are a few characteristics that define this type of plant. There is one very unique aspect of a fern that makes it stand out from other plants: its life cycle.

If you’ve ever looked under the fronds of a fern, you may have seen small brown circles covering the undersides. These are small sacs, which contain spores. The plant eventually releases these sacs and once they dry up, much like moss, they release spores into the surrounding area. These spores then grow into a phase of that plant’s life cycle that most people never get to see—the gametophyte stage. This tiny stage of a fern’s life looks nothing like the ferns we’re accustomed to seeing—they appear to be almost like a liverwort—but carry both egg and sperm to create new ferns. Once the gametophyte reaches maturity, it needs water for the sperm to fertilize the eggs, which is why ferns love moist soils. Once the egg is fertilized, soon a curly stem, or a fiddlehead, will appear and unfurl to reveal the fronds we know and love. 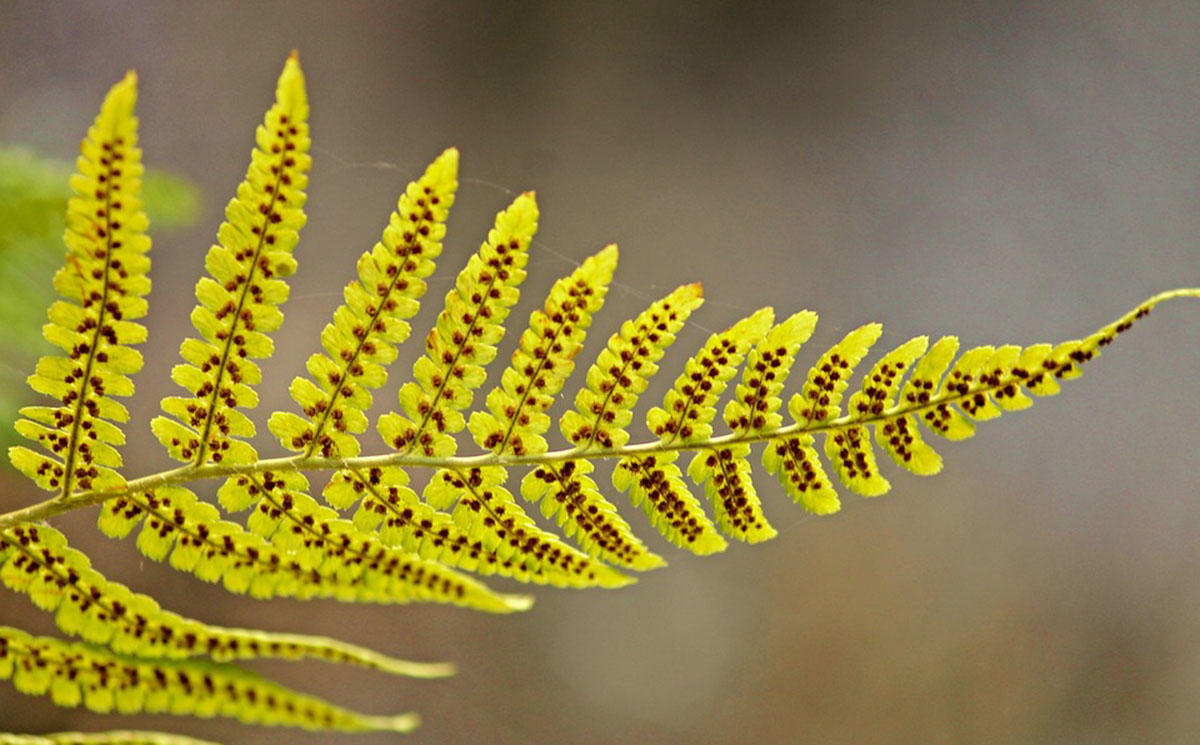 Spores on the underside of a fern leaf. Manfred Richter / Pixabay

In addition to having a life cycle like no other, some ferns also have rhizomatous stems. This means that when we look at an individual frond, we are actually only seeing a single leaf. The stem itself is usually horizontal and underground. Some fern species have short roots which are attached to the underside of its rhizomatous stem. Because of this, when looking at a large group of fern fronds, there’s a high chance that they’re all just one plant with a massive underground stem system that can cover entire hills.

The San Francisco Stewardship team learned this fact the hard way when we paid a visit to Baker Beach to collect ferns for our weekly volunteers to transplant to a different site. Sporting shovels and field gear, we went out to collect ferns, but when we attempted to dig up some of these ferns, our shovels had a hard time piercing the soil. Turns out the entire hill was one massive system of fern stems, and each fern frond was connected to all of the ferns around it! After much effort, we managed to collect about 30 ferns from the hill. One good thing about ferns is that even if you separate a part of its stem from the larger group and plant it somewhere else, if it has roots and part of its rhizomes left, it will take hold. If the conditions are right, you’ll begin to see more fiddleheads and fronds pop up over time.

With these similarities, ferns can be wildly different from one another and grow almost anywhere. The polypody you’ll find at the Presidio Coastal Bluffs doesn’t grow more than two feet off the ground and needs constant water lest they dry up. But the Goldback, which can be found in the Marin Headlands, has a powdery gold substance on the underside of its leaves, which helps it survive the dry season.

Though many ferns around the world have cultural significance, in the Bay Area they’ve mostly been happy to live alongside us and provide a charismatic addition to the natural world around us. The San Francisco Stewardship team is always delighted to find a patch of ferns, so next time you’re on a walk in the Coastal Bluffs or a hike in Marin after it rains, take a look around you for our fern-miliar friends and know that somewhere in the park system we’re nerding out over these fascinating little plants.