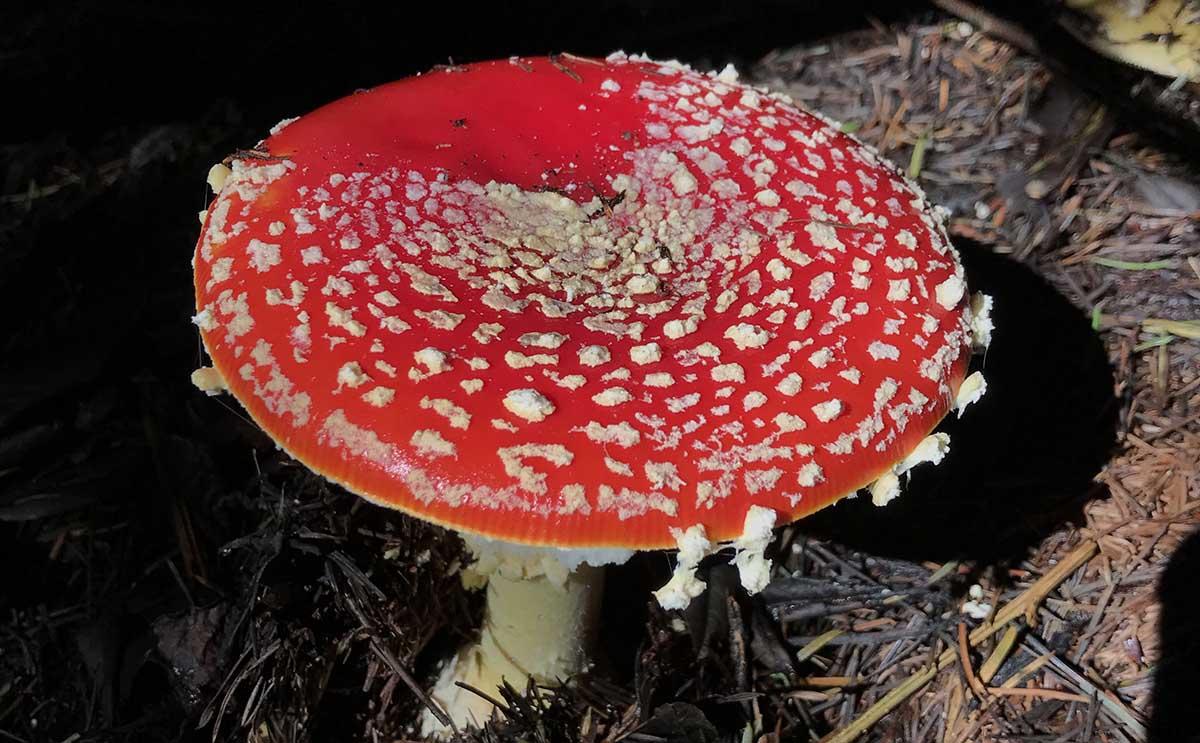 I have to admit, I wasn’t much of a fungus fanatic before coming to California. Growing up in Florida, I became familiar with the more common mushroom species that would spring up after frequent rains, but otherwise I hardly paid mushrooms any attention. Maybe I didn’t look hard enough for some of the more charismatic fungus species in my area, or maybe my eyes were just distracted by the diversity of insects and herptiles I’d encounter on a daily basis. Either way, I had always found mushrooms kind of cool, just not that cool. But that all changed when I landed in San Francisco.

I remember when the first showers of the season arrived. After nearly two months of bone-dry soils and a few weeks of scattered wildfires to the north and south, the skies finally began to weep. And after the rain fell and dried, all sorts of mushrooms began to rise from the soil. It was during one of our regular volunteer programs that I first noticed the gifts the rains had left behind. First, it was a family of honey mushrooms that some volunteers and coworkers pointed out to my team and I. Then, a massive western jumbo gym I spotted growing out of a tree stump as we were leaving Lobos Creek. I had recently been getting into the habit of photo-documenting the interesting things I had been finding in the field, and I decided right then and there that I should start documenting all the interesting mushrooms that I’d eventually come across during my time here in San Francisco.

As I began exploring more of the area in my free time, I was delighted to find there were many more species of mushrooms than I had never seen before. While on a hike with a friend in Point Reyes, we noticed a beautiful fly agaric mushroom trail side. It had recently rained, so I was excited to see what other kinds of mushrooms we’d encounter on the way. By the time we got back to the trailhead, we had documented seeing a few clusters of witch’s butter and some lilac bonnets, along with a couple yellow-veiled amanitas and sulfur tufts.

Soon after, my coworkers and I were presented with the opportunity to participate in a Fungus BioBlitz hosted by the One Tam folks at Roy’s Redwoods Preserve. I was a bit nervous to lead a group of people to search for fungus in an area unfamiliar to me, but everyone's enthusiasm quickly put me at ease. By the end of our brief expedition, our group had made upwards of 30 different observations, contributing to a total of around 240 observations for the day. Out of all the fungus we found along the way, the rare maroon madrone tubaria and a stack of western jack-o’-lantern mushrooms were two of the sightings that excited me the most. Besides all of the cool and colorful mushrooms found on that day, the event also helped me connect with a lot of the amazing people who shared my growing passion for mushrooms!

Following the BioBlitz, I became extremely infatuated with finding and documenting fungus diversity. About a month after the BioBlitz had passed, another good friend of mine and I got up early one morning to hike through Muir Woods. It was an especially cold and wet morning, but the many different species of mushrooms we encountered along the way helped distract me from the less-than-ideal weather conditions during the first half of the hike. On our way home, I began uploading all of the observations from the last few hours onto iNaturalist. Fifty observations later, I was looking back at all the photos we took along the way with a huge grin on my face. Out of all the amazing species we spotted that day, the toothed jelly fungus, the white coral fungus, and a massive colony of stinking orange oysters were some of my personal favorite findings.

Recently, I haven't been as active with my observations, but I still look at mushrooms with the utmost respect and admiration. Fungi aren't just fascinating and extremely diverse, they also play a vital role in acting as decomposers in many different ecosystems across the globe. Additionally, some mushrooms form symbiotic relationships with trees and plant species, often exchanging certain nutrients and resources for sugars that most plant species can easily photosynthesize. I could go on and on about all sorts of cool things involving mushrooms, but I encourage anyone reading this to look into these mysterious beings on their own if they're feeling particularly inspired.

Some of the mushrooms mentioned in this article can be viewed and admired by clicking through the photo gallery above.