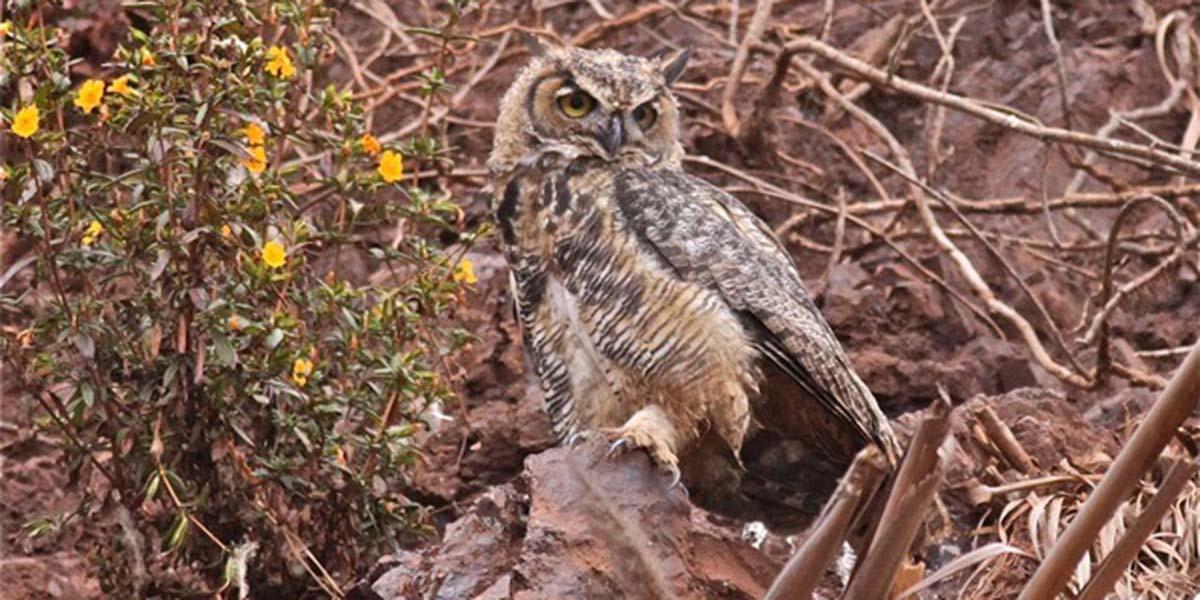 It’s March and you know what that means—bird season! Soon, Lands End will be covered in passing migratory birds of all colors, shapes, and sizes. However, one particular bird caught my eye last month and it wasn’t a migratory bird—and it wasn’t even at Lands End.

As I was participating in a training at the San Francisco Park Stewardship office building in the Presidio, I looked up to see a raptor of epic size. Right there, on the side of our building was the biggest great horned owl I’d ever seen. From my article about hawks, you know I have a bit of a love affair with raptors. So you can imagine I was thrilled to see this gorgeous animal just hanging out around the building. What’s more is that it continued to visit that same spot throughout the beginning of February. Every day, I’d just have to look up, and there it was. Intrigued by our fluffy visitor, I decided to look into the life and habits of the great horned owl.

Great horned owls are found all over North America, stretching from Alaska down into Mexico and even parts of South America. These hardy birds can be found anywhere if you look close enough. Though they can be be found in cities, wetlands, and even deserts, these owls prefer wooded areas with lots of open spaces, making the Presidio almost preferred if you want to go owl-spotting.

These animals are not picky eaters, hunting anything from rodents to small mammals, birds, lizards, and occasionally, even other raptors—including hawks. They tend to perch high up and search open spaces for any signs of movement before silently pursuing their prey. It takes 28 pounds of force to pry open the claws of a great horned owl and they use these powerful claws to grip the spine of their prey, incapacitating them. Though they are mostly nocturnal hunters, there have been reports of great horned owls also actively hunting during the day, especially in the winter. These owls are also known to store their prey for later in colder climates, using the freezing temperatures to “refrigerate” their food.

Like many other birds, great horned owls are monogamous. Outside of the breeding season, the pair will usually stay in the same area, but hunt and roost separately. During the breeding season, they will usually stay together. These owls also do not create their own nests, insteading taking the nest of another raptor or crow. They will add their own feathers to the nest occasionally, but other than that, do not actively build their own nests. In fact, recently a nest monitored by the Presidio Trust with raptor cams to record the growth of baby red-tailed hawks was taken over by a pair of mating great horned owls. The nest was visited by the owls during the night while it was under construction by the hawks and, eventually, the hawks were evicted by the owls. Luckily, the hawks in the Presidio are known to create “backup” nests.

The mating season for these owls starts early compared to other birds. By late winter they’ll have laid 1-4 eggs and after a little over a month, the eggs will hatch. Baby great horned owls start off as fuzzy little owlets that start to leave the nest at only 9-10 weeks old. Even after they’ve left, their parents can still feed them for up to year.

As you walk through the parks in the spring, noticing the colors of the wildflowers and the first trickling of migratory birds through our city, see if you can spot some of these majestic raptors as well. I know the Presidio has quite a few and hopefully they can delight and inspire you just as much as they delight and inspire those of us here at the Parks Conservancy.