'This is your land': Special naturalization ceremony at Crissy Field 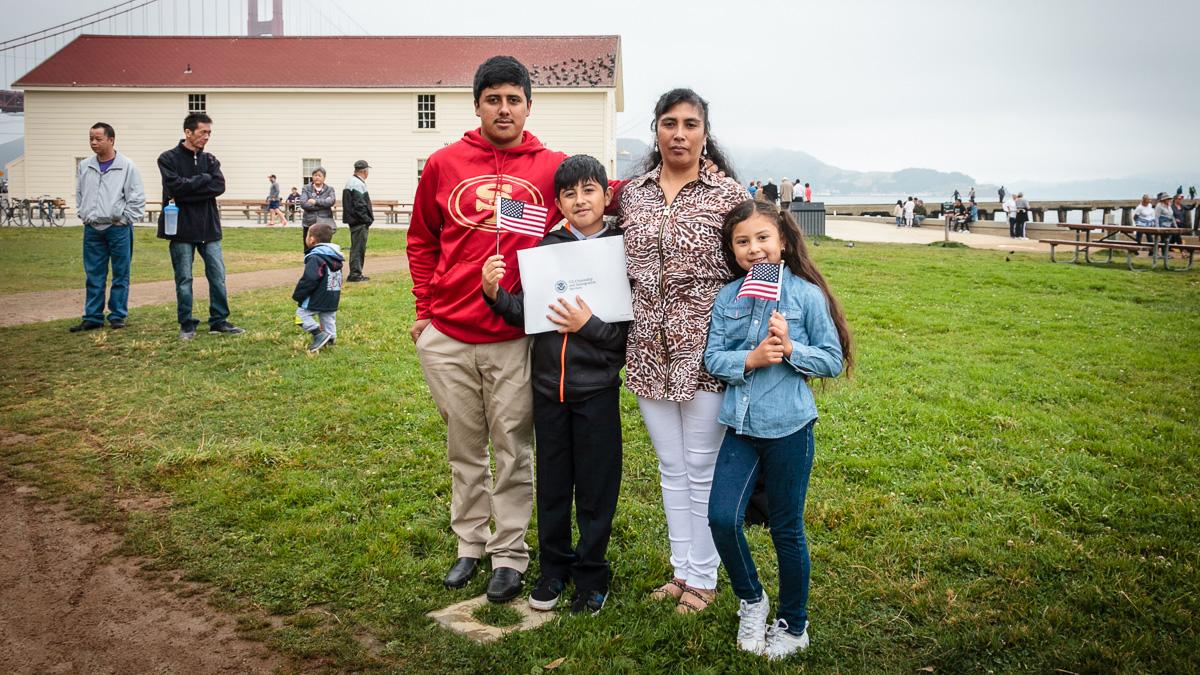 As 32 young people were welcomed to the United States in a special citizenship ceremony at Crissy Field on August 17, one official accidentally thanked the National Park Service (NPS) by saying “this is their land, they are our gracious hosts.”

Addressing the children seated before her and their parents all around, Golden Gate National Recreation Area Superintendent Laura Joss said: “A small correction: This is your land, all of you.”

The theme of parks for all was especially poignant during the naturalization ceremony. In the shadow of the Golden Gate Bridge, young people from 16 different countries took the Oath of Allegiance, received their Certificates of Citizenship, and were honored for choosing the U.S.

They also heard from San Francisco author Dave Eggers, had him sign copies of “Her Right Foot,” and checked out the StoryWalk featuring the book nearby. This is a story about the Statue of Liberty—a symbol of immigration and welcoming in America. The StoryWalk, a project of the Golden Gate National Parks Conservancy, the San Francisco Public Library (SFPL), the Presidio Trust, and the NPS, connects the Golden Gate Bridge with the Statue of Liberty as welcoming symbols.

“Our bridges were built by immigrants, some of our best ideas were born in the minds of immigrants, and this country will only survive if immigrants continue to choose and call the United States home,” Eggers told the crowd in a stirring speech.

One of Eggers’ main themes was “the immigration story never ends.” And a stunning number of people in attendance, not just the new citizens, picked up on that thread.

Puiyuk Sin, one of several SFPL children’s librarians in attendance, grew up in Hong Kong dreaming of becoming a librarian, and only got to realize her dream after coming to the U.S. at age 17. Jaime Wong, who helped usher in “Her Right Foot” as a marketing manager at Chronicle Books, still remembers the day her mom became a citizen. Wong was in school and sitting in class like it was a regular day, but for her mom it was one of the most special days of her life. 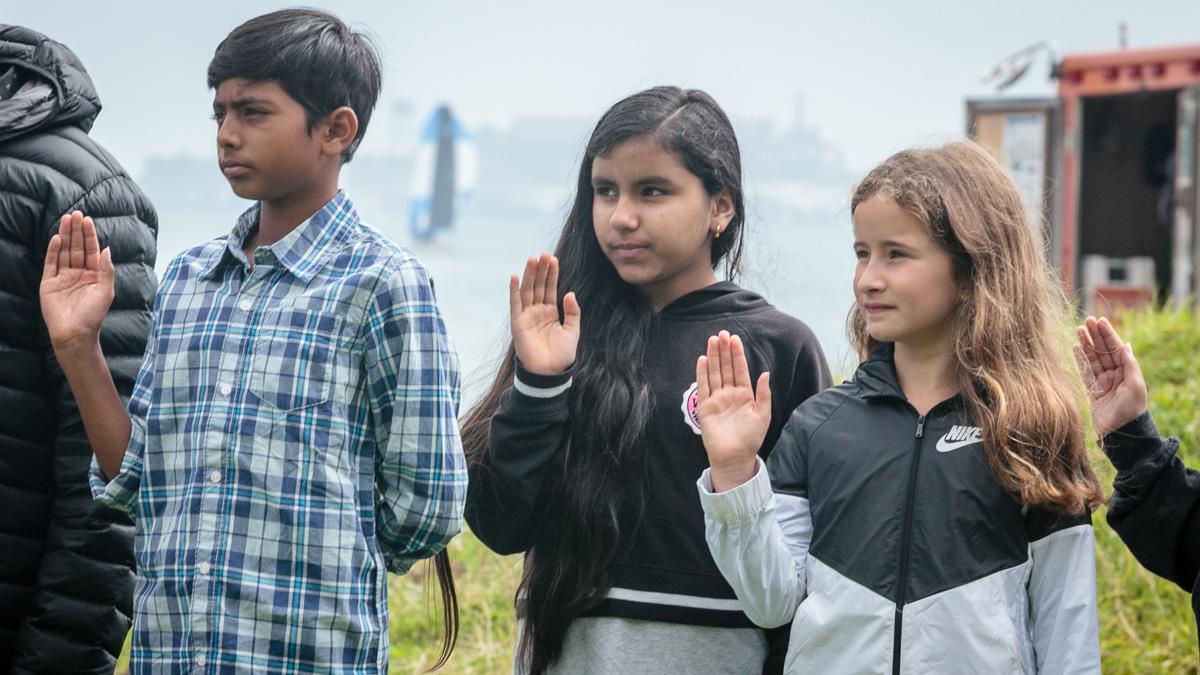 “It’s so easy these days in the current state of our country to become jaded,” said Janine Mogannam, a children’s librarian from an immigrant family. “But seeing the children from so many different nations gathered together to become Americans, it’s a beautiful reminder of what makes our country special and the potential we have to be truly great—open-minded, life-affirming, and progressive.”

Parks Conservancy President & CEO Greg Moore shared the story of Nessa Ramos, who came to the U.S. as a teenager from the Philippines and initially found the transition tough. Then she landed at the Inspiring Young Emerging Leaders (I-YEL) program at the Crissy Field Center, went to college, and became an American citizen in 2016. Shortly thereafter, she reconnected with the Conservancy and Moore hired her to work in the executive office. He called it “one of the best decisions I’ve ever made.”

The ceremony itself was filled with inspiring moments. The young people were called up country-by-country by Deputy District Director Roland Lyons of the U.S. Citizenship and Immigration Services’ (USCIS) San Francisco District and Field Offices to say the oath, which is the same administered at regular citizenship ceremonies at Oakland’s Paramount Theater. The children then received their certificates, their new proof of citizenship. When a parent naturalizes, their children also automatically become citizens as long as they have green cards and live with the parents.

In July 2017, the USCIS held a similar ceremony for young people at Children’s Fairyland in Oakland. And in 2005, the Presidio christened the new Immigrant Point Overlook with a ceremony for 23 new U.S. citizens. An inscription at the site along Washington Blvd. says “We opened the gates to all the world and said: ‘Let all men who want to be free come to us and they will be welcome.’”

“On behalf of... everyone here, and everyone in America who came from somewhere else, and that’s pretty much all of us, you are welcome here,” Eggers said. “You are valued here, and we expect great things from you … this country’s greatness depends on you.”