Yours and Mine: Finding inspiration and friendship along a Presidio trail 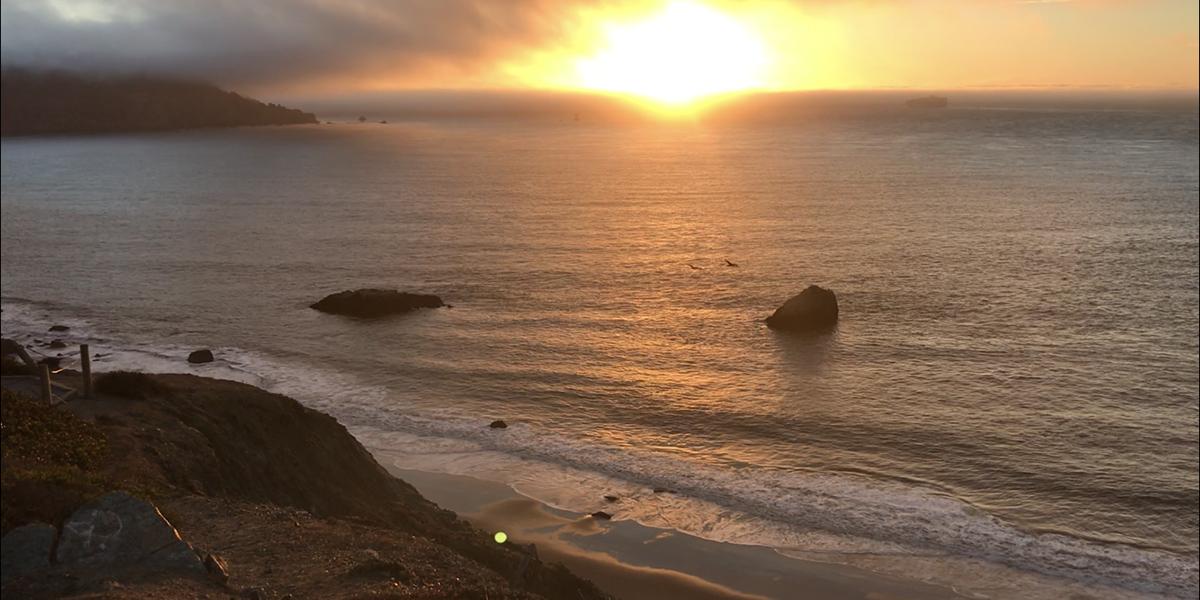 A view of the Pacific Ocean from the Presidio bluffs. Gabriel Tigreros / Parks Conservancy

It’s a little past 6 p.m. and I’m standing at the entrance of the California Coastal Trail in the Presidio. I didn’t plan on being here this particular evening but I had already been outside in the sun all day and I figured an extra hour or two wouldn’t hurt. Plus, the sun would be setting soon. So I made my mind up and started my saunter over to the Bluffs.

A short walk later, and there I was, making my way down the first few steps of the California Coastal Trail. As I made my way down this path flanked by two large shrubs, an excited chorus of birds called from within. I couldn’t help but crack a smile, and I began to listen closely to their conversation. After a bit of back-and-forth between the shrub’s occupants, I started to feel like an eavesdropper and I continued to make my way down the trail with that same big smile glued to my face.

Just a few steps lower and the shoreline slowly revealed itself. The scene reminded me of something you might see in a movie, so I took a few paces back and took some time to silently admire the sound of the waves crashing below and the smell of salt in the air. It was almost right at this point that I started to hear a horn playing in the distance. I couldn’t tell if it was a trumpet or a saxophone, but it sounded mesmerizing, and it was getting closer and closer. As the music grew louder, I heard a familiar voice, one that belonged to none other than the amazing American jazz singer Billie Holiday. Alongside the bluetooth speaker that projected her voice, an energetic older man could be seen making his way up the last few meters of the trail.

This man had a smile on his face as big as mine, and was wearing a hat decorated with what he later revealed to be pelican feathers he had collected on the beach. I asked him what the name of the song was called, and he stopped to tell me it was “Yours and Mine.” I quickly jotted the name down so I wouldn’t forget later, and for the rest of the song’s duration we both stood there smiling, watching, and listening. The lyrics started to speak to me, and in that moment I felt like I started to understand what park stewardship really meant.

After the song ended, we talked about music for a minute before exchanging names and shaking hands. He wished me an enjoyable rest of my evening and I wished him the same before we went our separate ways. At this point the sun had begun to disappear, and I decided to try and get a better seat farther down the trail. I found my spot, sat there quietly and watched the sun bid me a drawn-out adieu. As soon as the sunset was over, fog that had begun to build up on the horizon started to collide with the faces of the bluffs, almost as if the sun’s presence was holding the fog back and it was now free to roam around San Francisco as it pleased. I welcomed it with open arms and made my way back up the way I came, feeling inspired by my impromptu visit to the bluffs.