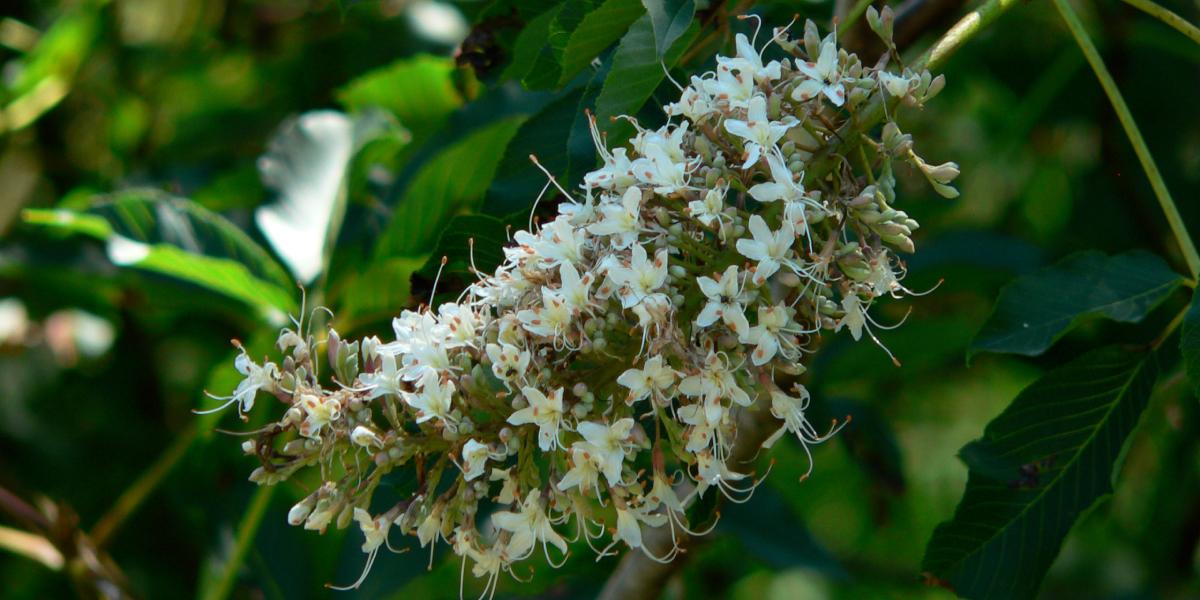 Genus: Aesculus - the Latin name for a kind of oak bearing edible acorns but applied by Linnaeus to this genus.

Species: californica - of or from California.

The branches of this tree form undulating lines radiating from the trunk. Pale gray bark. The leaves are palmate (five leaflets borne in a hand-like arrangement). Leaflettes are 8 inches long. Flowers are in long clusters of white to pinkish. Flowers are fragrant and appear at the ends of branches from April-May. The flowering period can last more than a month as new flowers continue to open. Typically the stamens are longer than the 5 petals. The fruit is a smooth, pear-like, leathery capsule with between one and three seeds each. Each seed is 2-3 inches, brown and shiny. Each with a pale scar resembling a “buck’s eye.” The fruit is poisonous.

Partial shade to full sun; tolerant of drought but needs regular water for the first few years. California buckeye grows on dry slopes, in canyons, and along waterways.

The seeds of California buckeye served as a staple for California Indians, who would mash the roasted seeds and then leach them to remove the poison. Native Americans also secured the seeds in streams and other waterways in order to stupefy fish for easy capture. The fruits were used as fish poison by the Pomo, Yana, Yokut, and Luiseno peoples.