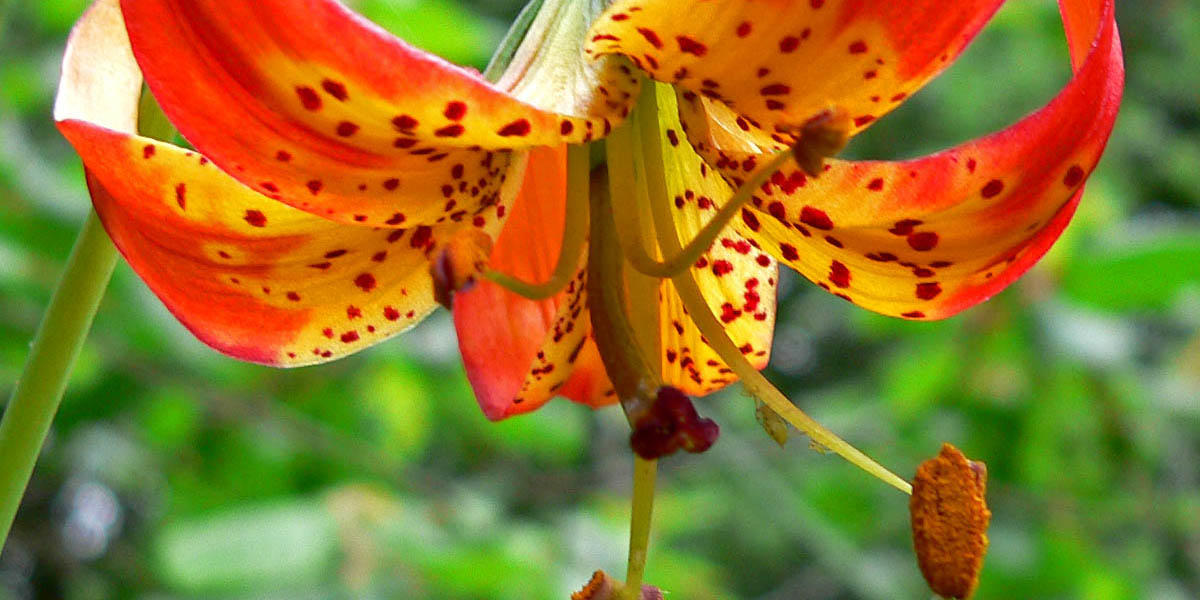 Genus: Lilium - derived from the Greek word lirion, which means “a lily.”

Liliaceae, or Lily family. This plant family of about 3,500 species consists of mostly perennial herbs. Plants of this family tend to have narrow, parallel-veined leaves and underground storage organs such as rhizomes, bulbs, corms, or tubers. Some of the plants that make up the Liliaceae family are evergreen succulents, onion, garlic and tulips.

A deciduous bulb that is native to California and southern Oregon. Its habitat tends to be stream banks, forming large colonies along the California coastal range, and Sierra Nevada, up to 6,000 ft. It can be found in bogs, woodlands, and sunny edges.

Growth habits: Spread by creeping rhizomatous bulbs. The stout stems are 3-6 ft. high with whorls of pale- to deep-green, narrow leaves. Each stem bears one to several nodding, yellow, orange or red, maroon-spotted flowers at its apex.

Flowers: The flowers are hermaphroditic, containing both male and female organs, and are pollinated by bees and butterflies. Crimson red with orange nodding, flowers are two to four inches wide with reflexed tepals. They bloom on short stalks above whorled lanceolate (lance shaped) leaves for about four weeks in July.

The root of this plant is edible, and can be cooked in a way similar to potatoes.

The Pitkin marsh lily, a subspecies of the leopard lily, is on the U.S. Endangered Species List. It is classified as endangered in California and is found in Marin, Napa, and Sonoma Counties. The Pitkin marsh lily has been squeezed out by development and subject to competition with invasive plant species, hungry cattle, and horticulturists looking to nip a few plants.