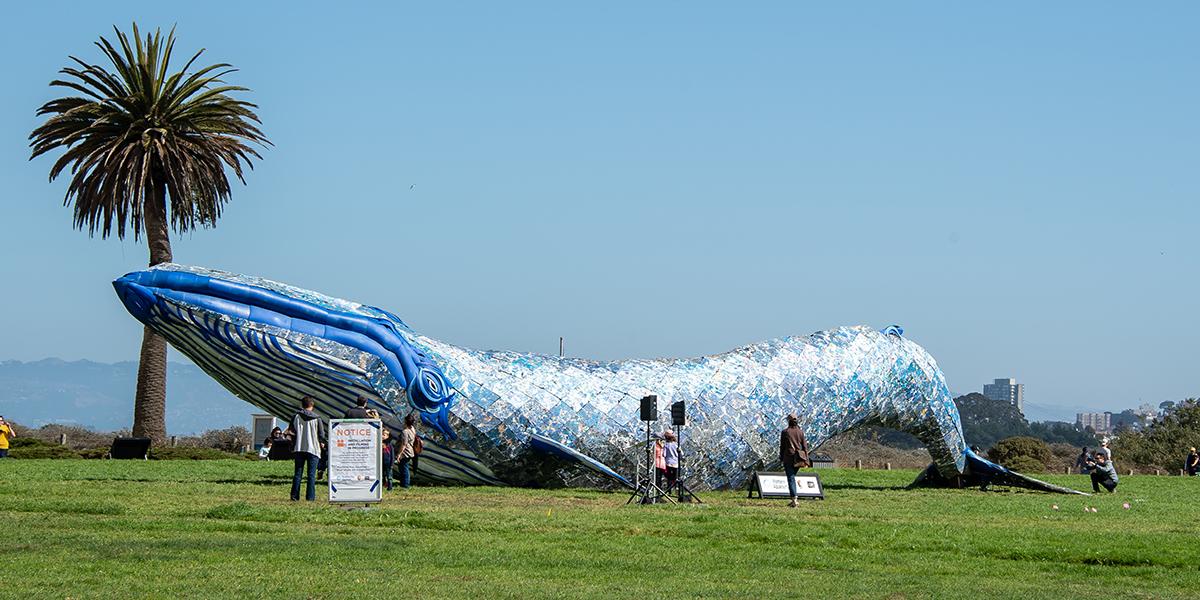 Monterey Bay Aquarium’s blue whale art installation is presented by Monterey Bay Aquarium in partnership with the National Park Service, the Golden Gate National Parks Conservancy, Hub Strategy & Communication, Building 180, and lead artists Joel Dean Stockdill and Yustina Salnikova as a part of the Art in the Parks program. To raise awareness of ocean plastic pollution, the Monterey Bay Aquarium built a life-sized blue whale art installation from discarded single-use plastic. The Big Blue Whale sculpture is located at the west end of Crissy Field and will be free and open to the public October 13th, 2018 to January 13th, 2019. Below is the sign content accompanying the exhibition. To learn more, visit parksconservancy.org/bluewhale.

The Monterey Bay Aquarium is working to turn the tide on plastic pollution.

A Second Life For Single-Use Plastic

The whale is made mostly of single-use plastic trash. It’s the stuff people think is being recycled, but often isn’t: Grocery bags, milk jugs, laundry detergent containers, bubble wrapping, produce bags, etc. We spent months collecting, sorting, cleaning, shredding, heating, and molding the plastic to create the whale you see in front of you.

Every nine minutes 300,000 pounds of plastic—the weight of a blue whale — makes its way into the ocean. To draw attention to this enormous problem, we built a life-sized blue whale from discarded single-use plastic. We hope as you walk around our whale and learn more, you’ll join us in protecting our ocean.

Plastic is everywhere. And the problem is growing every year. In 2015 alone, humans produced 322 million tons—644 billion pounds—of the stuff. That’s more than 20 times the amount of plastic produced in 1964. Much of this plastic is made to be thrown away after a single use. Unfortunately, there is no “away.” Plastic doesn’t disappear, and it’s piling up on land and in our ocean.

Not Lost At Sea

A lot of plastic ends up in our ocean: about nine million tons every year. This waste often clusters in ocean gyres, forming large garbage patches. In addition to ocean gyres, scientists have also found plastic frozen in polar sea ice and buried in deep ocean trenches. If we don’t turn the tide, the amount of plastic in the ocean is projected to double by 2025. Since 1950, we’ve produced 8 billion tons of plastic. 6.3 billion tons have been discarded. Of that amount, only 9% has been recycled.

Plastic impacts ocean animals too. They can easily mistake plastic debris for food, which can cause them to starve to death. Scientists estimate that by 2050, over 90 percent of seabirds — including pelicans, herons and seagulls often seen at Crissy Field — will have accidentally eaten plastic at least once. The local population of gray whales and bottlenose dolphins faces a similar fate.

We should all recycle, of course. But recycling alone won’t solve this problem.

There’s just too much plastic and not enough resources to recycle it all. For decades, the United States relied on China to do most of its recycling. But China is beginning to restrict the types of plastic waste it accepts.

So, what can we do? First step: stop buying so much plastic. Reducing our plastic consumption won’t be easy, but it’s quite literally one of the most important things we can do.

At the Monterey Bay Aquarium, our battle against plastic pollution goes way beyond using art to attract attention. We’ve also: Co-founded the nationwide Aquarium Conservation Partnership, a coalition of 22 aquariums working to reduce plastic pollution and take other conservation actions; Supported California legislation that will reduce the use of plastic straws (the “Straws On Request” bill and a state resolution declaring November “No Straw November”); Successfully helped pass the statewide plastic bag ban; Significantly reduced the use of plastic in our own cafe and retail shops; Trained classroom teachers to address plastic pollution (and solutions) with their students through our annual Ocean Plastic Pollution Summit.

Be An Ocean Hero

The good news is, there’s a lot you can do to help.

Bring your own container for your restaurant leftovers, a travel mug for coffee, reusable utensils and shopping bags.

Try a “no-single-use-plastic” challenge with your family, friends and colleagues. Talk about zero-waste living on social media. Organize a beach or park cleanup. Our collective efforts really make a difference.

Call, email, tweet or do whatever you can to make sure your elected representatives are working to reduce plastic pollution and single-use plastic at all government levels. You can make a difference wherever you live.

Vote With Your Wallet

Money talks. It also can help the ocean. Buy products that don’t have plastic packaging (they exist), support restaurants that offer compostable take-out packaging and request your drink without a plastic straw (unless you truly need one). Speaking up creates a demand for ocean-friendly alternatives!

Your habits and their effects on the ocean

Bags, bottles and other products

Things before you replace them

What you can and buy recycled products

Now Let’s Get Out There And Save The Ocean Like Our Lives Depend On It. Because They Do.

No one builds a plastic-trash whale alone. The Monterey Bay Aquarium worked in partnership with the National Park Service, the Golden Gate National Parks Conservancy, Hub Strategy & Communication, Building 180 and Bay Area artists Joel Dean Stockdill and Yustina Salnikova through the Art in the Parks initiative.

Part of the Golden Gate National Recreation Area, Crissy Field has undergone many changes. Once a rich saltmarsh and homeland of the Ohlone people, it became a landing site for Spanish and Russian explorers, and later, a pioneering U.S. military airfield. When the National Park Service assumed management of the Presidio in 1994, Crissy Field was an unsightly concrete wasteland. It wasn’t until 2001 that Crissy Field was transformed into the park you see today. Part of the Golden Gate Biosphere, a diverse mix of terrestrial, coastal and marine environments complemented by a rich cultural history, Crissy Field is the perfect place to consider what each of us can do to keep our ocean clean and healthy.