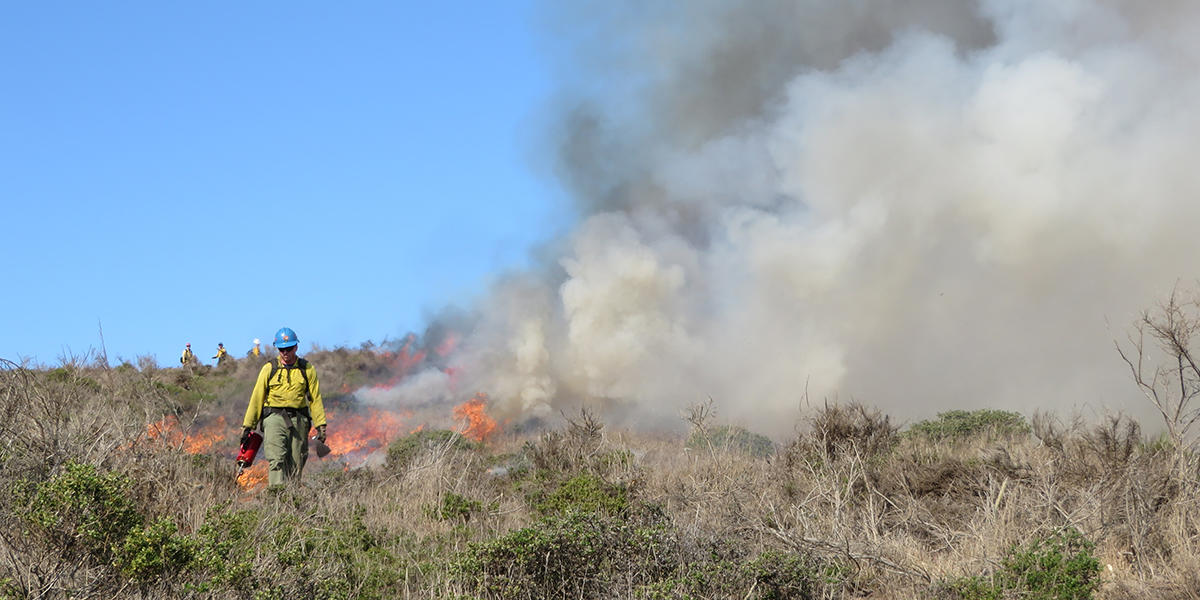 A fireman walks away from a controlled burn Jeff Panetta

Editor's Note: It’s impossible to discuss the subject of fire without first acknowledging the recent events in the North Bay. As we explore the subject of controlled burns, the victims of those tragic wildfires remain in our hearts, and at the forefront of our minds.

Fire plays a complex role in the management of your national parklands. Its power to destroy and devastate is indisputable. But it also has the ability to benefit an ecosystem—a process that the National Park Service (NPS) and other federal agencies have begun to explore.

It was colonizers from Europe who established fire suppression as the norm.

“Both the federal government and the California State government agreed that they didn’t want fire [on their lands] anymore,” says Gregory Jones, Fire Engine Captain in the Golden Gate National Recreation Area.

In the early days, the NPS followed the “10 a.m. Rule,” which stipulated that “a fire was to be contained and controlled by 10 a.m. following the report of a fire, or failing that goal, control by 10 a.m. the next day, and so on.” This rule was promulgated by the U.S. Forest Service in 1935 and was adopted across the nation, marking a high point in fire-suppression practices.

It wasn’t until the release of the Leopold Report of 1963—an influential document considered the bible of modern ecology and land management—that the benefits of fire were finally acknowledged on a national level.

The Leopold Report put an end to unethical practices (such as the culling of predators, feeding of wildlife, and installation of non-native species into an environment) and shone a spotlight on the potentially harmful effects of systematically suppressing fires (like the accumulation of underbrush and other forest floor fuel).

The report helped steer the National Park Service to adopt the practices we still use today. It changed the game.

In 1968, the first prescribed burn in the Western United States was conducted at our national park neighbor to the southeast: Sequoia and Kings Canyon National Parks. Since then, controlled burns have been a tool employed by the Park Service, Forest Service, and other land management agencies.

“Here [at Golden Gate], we actually have a rich history on the fires, starting with Native Americans,” Jones says.

He and his team are based in the Marin Headlands, but they don’t actively fight all the fires in those four sites from there. They work in tandem with local fire agencies, such as Cal Fire in San Mateo County and Marin Fire in Marin County, to help suppress wildfires in those parks—and help with prescribed burns in those parks.

Jones has seen first-hand the benefits of controlled burns on ecosystems.

“In Marin County, we have certain plants which require high intensity fire to propagate themselves,” he notes.

Giant sequoias, like the ones towering in Sequoia National Park, require fire to open up their cones, allowing the tree to propagate.

Similarly, “the bishop pine at Point Reyes National Seashore requires a fire [to propagate],” Jones says. “A fire will come through, completely killing all the trees in the stand (as was the case in the Vision Fire in 1995) and it’s the heat of the fire that allows the [bishop pine] cones to open up, allowing seeds to fall."

Propagation is only one benefit of fire. Fire also clears the forest floor of heavy brush, leaving room for new grasses, herbs, and regenerated shrubs that provide food and habitat for many wildlife species. By disrupting habitat, fire also can halt the spread of disease carried by insects that prey on trees.

And surprisingly, according to Cal Fire, disease kills more trees than fires each year.

While we are no stranger to diseases plaguing our trees (Sudden Oak Death, anyone?), we actually don’t have much forest in the 80,000 acres of the Golden Gate National Parks.

According to Jones, much of Golden Gate is covered by coastal grass and shrublands, which can bounce back from a prescribed fire within a relatively short timeframe.

“Some grasses often grow back within a couple weeks,” Jones says.

Recovery time “depends on the ecology of that specific site,” according to Jones. Fire managers can control the intensity of the fire through a variety of factors (what’s being burned, the location of the burn, and the weather). The drier, the hotter the burn.

The burn season at Golden Gate—when most of the prescribed burns are scheduled in the park—runs from October to November.

“We try to mimic natural cycles,” Jones explains. “This is the time of year when fires have burned historically. Burning out of the natural cycle may [affect] plants that aren’t adept in surviving fires [during that time of the year] so you can actually do damage."

To ensure a controlled burn doesn’t become, well, uncontrollable, Jones and his team often build shallow, three-foot wide trenches around the prescribed area and come armed to the teeth with equipment to extinguish it if need be (fire engines, flame retardants, etc.).

Before a fire is actually lit with the assistance of a driptorch (basically a gasoline canister with a torch attached to it), it takes about six months of planning and public outreach before the first flame flares.

“The fire is the easy part,” Jones says.