Celebrating its 150th anniversary this year, the Cliff House first opened its doors here on the West Coast in 1863—the same year Civil War Union troops repelled General Lee’s Confederate advances during the Battle of Gettysburg! Renowned for its history, hospitality, and awesome views, the Cliff House—now a beloved landmark in the Golden Gate National Parks—remains one of San Francisco’s premiere dining locales.

But have you ever wondered why San Francisco has so many fine restaurants and so much culinary diversity? For answers to these questions, we must look back to our city’s pioneering forefathers.

Rather unique to late 19th-century San Francisco was the large number of people who lived in hotels or lodging houses—rather than single-family residences. A peculiar hold-over from the more transient Gold Rush times, the popularity of the hotel or rooming house as a permanent residence endured into the 20th century, long after the ratio of men to women had established an equilibrium. 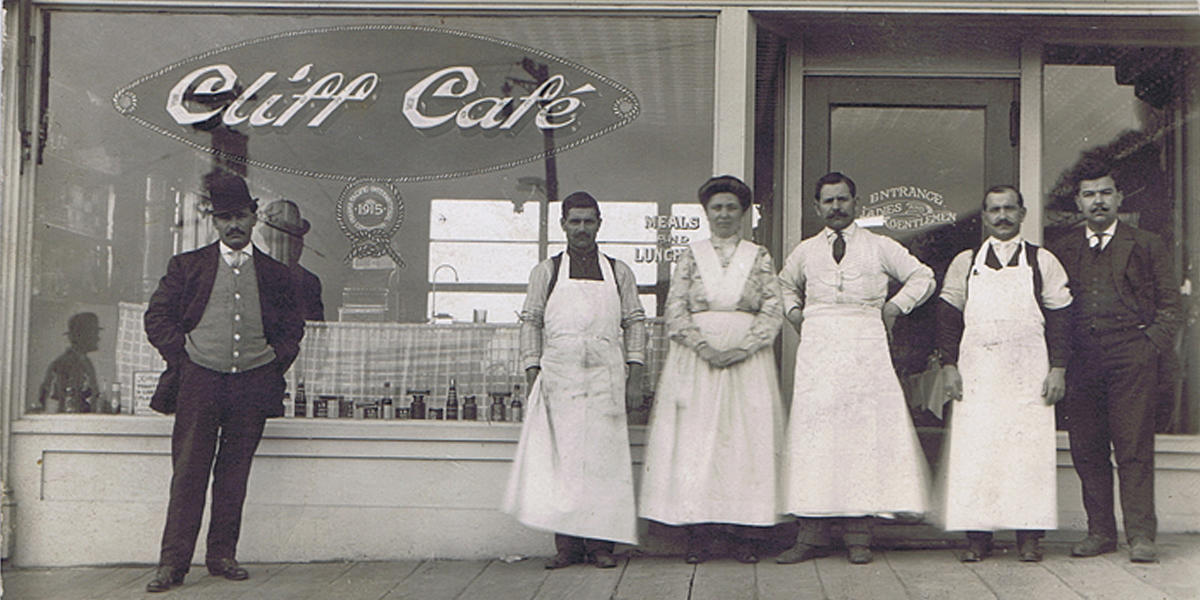 Consequently, San Francisco featured an unusually large number of restaurants, and even those who lived in single-family residences were more likely to eat in dining establishments than their contemporaries in other American cities. The variety and quality of food and lodging in late 19th-century San Francisco contributed to its cosmopolitan flavor; visitors considered it an unusually urbane and sophisticated American city for its size.

Just 50 years earlier, San Francisco had been inundated by fortune-seekers and entrepreneurs of many countries, each preserving some of their native gastronomical heritage through the numerous eateries they operated here. In 1850, journalist Bayard Taylor writes in Eldorado, or Adventures in the Path of Empire, that already “…the tastes of all nations can be gratified here. There are French restaurants on the plaza and on Dupont Street [today’s Grant Avenue]; an extensive German establishment on Pacific Street; the Fonda Peruana; the Italian Confectionery; and three Chinese houses denoted by their long three-cornered flags of yellow silk.”

Mexican fare had long been a staple of early Californians and local cafes featuring tamales, enchilada, frijoles, and chili con carne were both numerous and well-frequented. Of course world travelers were also impressed by restaurants serving a variety of local California delicacies, such as crab, shrimp, and abalone; turtle, quail, hares, and roast venison were frequently on menus, even the occasional grizzly steak.

In 1874, Scribner’s Monthly reported that San Francisco had more restaurants per capita than any city in America. “They number between two and three hundred…and at least thirty thousand people take their meals at them. They are of all grades and prices, from…Martin’s and Maison Dorée, where a meal costs from $1.50 to $20—down to the Miners’ Restaurant, where it costs only forty cents.”

Because San Franciscans were quite fond of their “liquid nourishment,” commonplace at the time was the practice of offering free meals with the purchase of a few drinks. In the 1890s, San Francisco had one authorized saloon for every 96 inhabitants, not counting the more than 2,000 speakeasies insidiously operating without licenses.

The Cliff House Restaurant is one of the elite few remaining San Francisco establishments that can trace its roots back 150 years. In the years since the Cliff House served up its first meal in 1863, the popular roadhouse has hosted everything from parlor room dalliances to Presidential dinners and Hollywood celebrity luncheons. Though it survived being rocked by explosive shipwrecks and earthquakes, including “the Big One” in 1906, the Cliff House has twice burned to the ground, each time being re-built on the same site in a style to fit the whim of its then owner.

Though the building is now preserved by the National Park Service (Golden Gate National Recreation Area), the Cliff House Restaurant is still privately managed. To honor its colorful past, the current proprietors, Mary and Dan Hountalas, have cooked up an exciting series of celebrations that will continue throughout the year (visit www.cliffhouse.com for more information). Help celebrate the rich heritage of the Cliff House in its anniversary year—and the long-time San Francisco tradition of dining out.