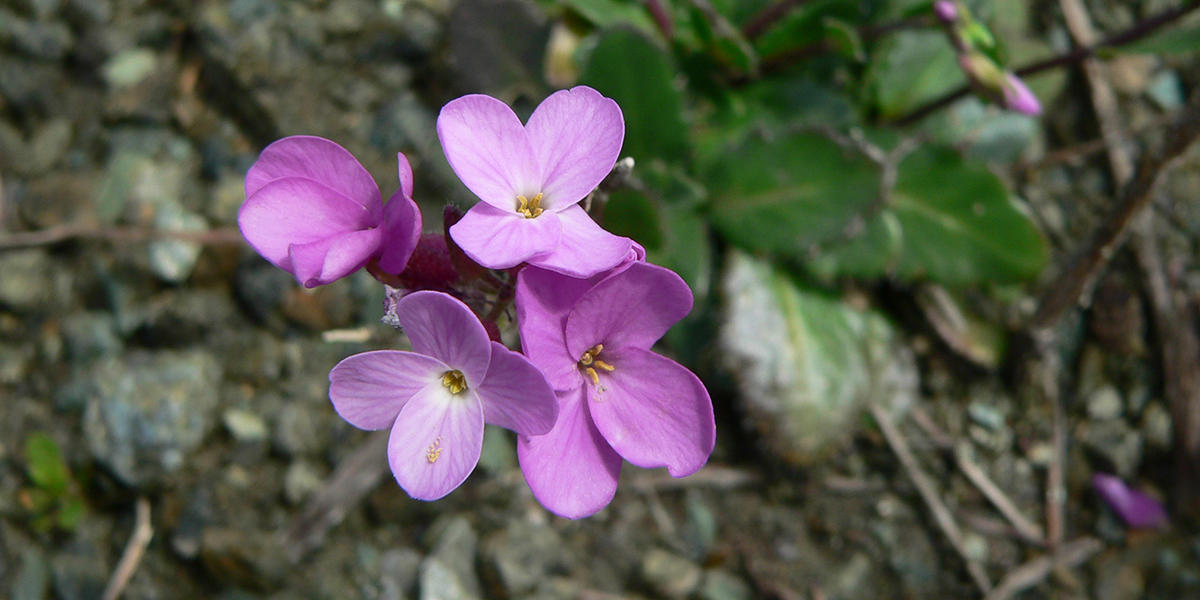 Annually around late January, an explosion of magenta-red flowers appears on the rocky road cut that forms the east face of Hawk Hill along Conzelman Road in the Marin Headlands. These are clumps of Arabis blepharophylla, the coast rock cress, and they bloom for about two months. Last Valentine’s Day I counted a record number (for me) on the Hawk Hill road cut—222 plants.

I’ve had a thing for coast rock cress (CRC) for years, particularly because it gives Hawk Hill a certain botanical sparkle in the non-raptor-migration months. I’ve been fascinated that these little delicate plants, no more than 10-inches tall, can hang onto the rocks of the Headlands from a near-vertical angle. They seem to like east-facing (morning sun) or north-facing slopes, and once you slow down to look for them, their hot pink flower heads seem to appear from nowhere.

Not only is coast rock cress found on rocky outcroppings throughout the headlands on both sides of the Golden Gate, it is found in the Coast Range from Monterey County to Sonoma County usually within the fog belt. (I’m suspecting that fog drip is the exact thing that allows CRC to survive life on a rock wall.) Endemic to California, coast rock cress’ official classification is “G3”—which translates to “vulnerable” and “in limited distribution.”

So, being a wildlife biologist, I tend to see plants as being around for just one reason: to support animals. And I started to wonder, just what does coast rock cress do? Here’s a four-petaled perennial in the mustard family (Brassicaceae) with mostly flat leaves (blepharophylla means “flat-leaved”) at its base, which hangs like a Yosemite rock-climber on little cliffs in the fog zone. So what pollinates it? I should first mention that Arabis (“of Arabia”) is a huge botanical genus from both the Old World and the New, and that flower-flies and bees are both known to be pollinators of some Arabis. But what about butterflies?

Scanning a half dozen butterfly books, I found that certain rock cresses are food plants for some Marbles and some Orangetips. In their ecologically rich Field Guide to the Butterflies of the SF Bay and Sacramento Valley Regions (UC Press), Art Shapiro and Tim Manolis specifically mention three butterflies that feed on some form of rock cress: the California White, the Cabbage White, and the Small Marble. All of these are members of the butterfly family Pieridae, which include many species that host or feed on mustard family plants, of which there are many, both native and introduced.

But CRC is unusual among Arabis. It has these fantastic red flowers—surely they must say something to somebody.

So my task for spring 2012 is clear: I will sit next to a coast rock cress until a pollinator shows up. And since I am mostly on the Marin side of the Golden Gate, I challenge my botanical brethren on the San Francisco side to do the same. Let’s look for Arabis blepharophylla pollinators, and when you see one, e-mail me at afish@parksconservancy.org and let me know what it is. I promise to share our collective findings on this rock-loving mustard in a future issue of Park E-ventures.