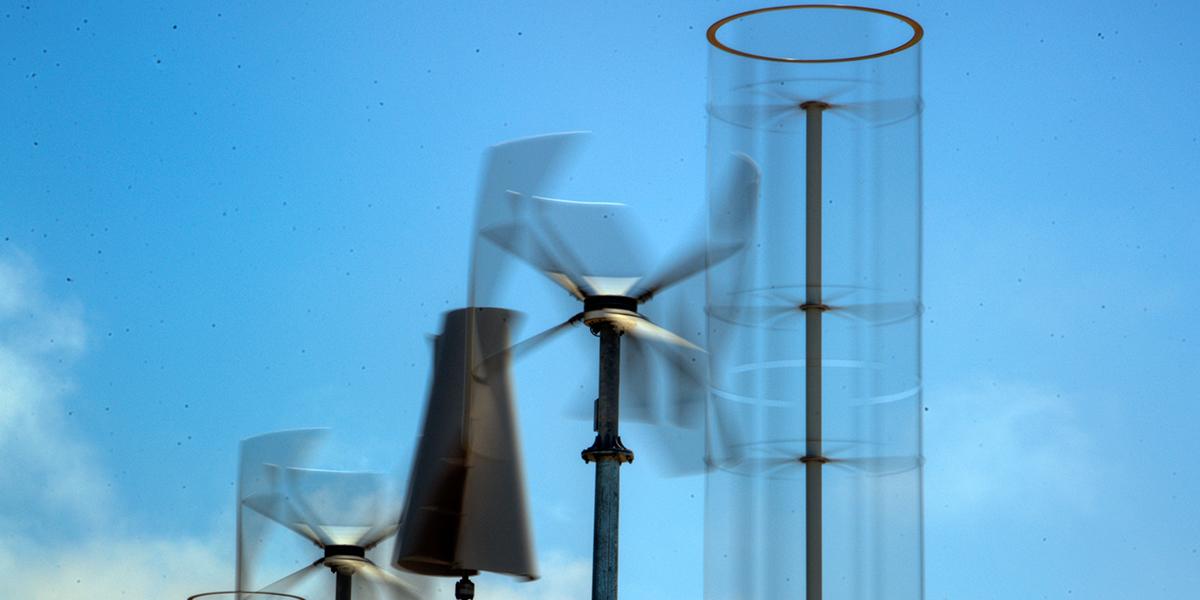 In reality, though, busy urban areas also can be used to yield power. Unfortunately, not much data is available on wind energy from these areas, after taking into consideration environmental factors such as trees, vegetation, and recreation vehicles that can affect energy produced.

Crissy Field Center, the Parks Conservancy’s urban environmental education center in partnership with the National Park Service and Presidio Trust, is doing its part to fill that crucial data gap.

Located at East Beach in the Presidio of San Francisco, the Center is a LEED Platinum-certified building—one of the greenest in America’s national park system. The building includes rainwater catchment, solar hot water heating, a 30-kw solar photovoltaic system, and five vertical-axis wind turbines, erected on the lawn just northwest of the Center to power the building and the nearby electric vehicle charging station. An emerging technology suited for urbanized environments, vertical-axis turbines stand in contrast to horizontal-axis varieties—the “propeller”-style turbines seen in more sparsely populated areas.

In 2012, Center staff started the wind turbine pilot project (sponsored by the Hawaii Natural Energy Institute) to collect wind data in an urban area, while also conducting a wildlife impact study. In the first phase, only one bird kill (and another possible bird strike) were recorded.

“In 2012 when this was first installed, little to no empirical data existed about small-scale vertical axis wind turbines and their impact on birds and bats; people are interested to learn about ways to generate wind power on a small scale in more urban and developed areas rather than wind farms,” says Tom Odgers, Senior Project Manager, LEED AP Planning & Design for the Parks Conservancy. “This project was an opportunity for schools and the public to learn about the educational aspect of renewable energy infrastructure—as well as highlight the park’s commitment to green technology and reducing emissions.”

And though the first group of vertical-axis turbines were “very quiet” and presented “a minimal hazard to wildlife” (only one bird kill and another possible bird strike were recorded), they left something to be desired in terms of power generation and durability, Odgers notes.

The study is now moving into the second phase with a new set of vertical-axis turbines, while expanding on the existing test platform to understand the feasibility of urban renewable energy production. In this phase, data from two wind test platforms will be collected and analyzed: 1) the Crissy Field Center site provides an exceptional wind resource for collection of energy data in a more congested “urban” wind regime; 2)  by comparison, the Anita Rock weather station— managed by the U.S. Coast Guard and located approximately 200 yards off the shoreline of Crissy Field—yields unobstructed wind data, similar to traditional wind farms set away from urban areas.

This second phase of the project, running for a year and culminating in a wrap-up report, will provide the range of conditions under which the effectiveness of the two wind test platforms will be evaluated for actual performance as compared to idealized performance.

And what better place to test assumptions about renewable energy than next to a state-of-the-art, green education facility, where young people develop the tools they need to advance technology for a brighter, more sustainable future?