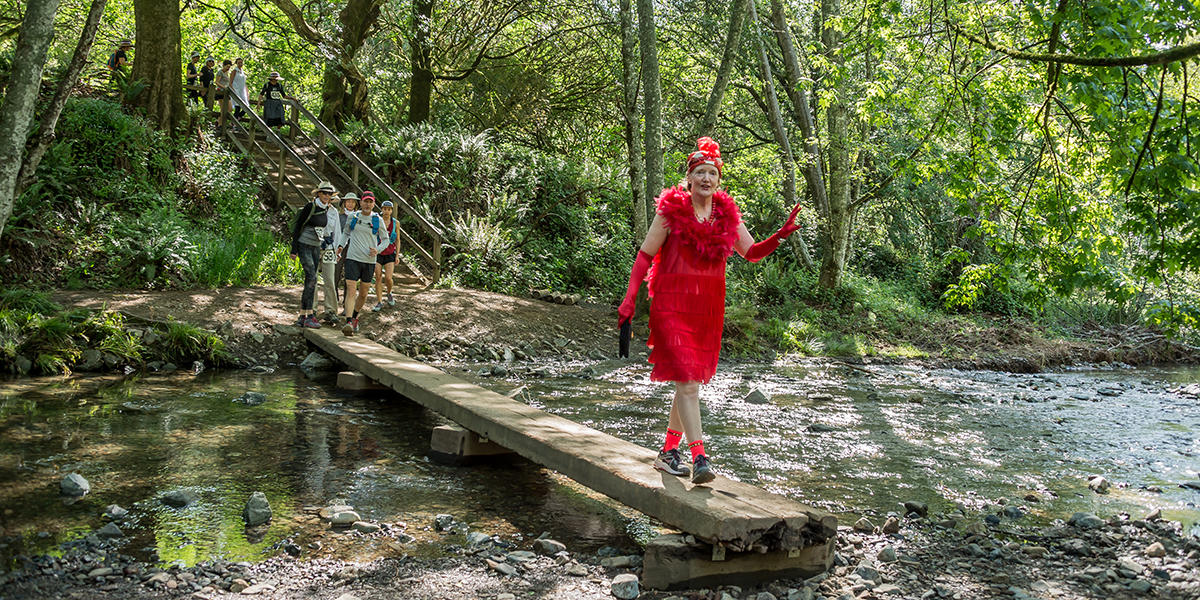 On April 21, participants in the Women’s Dipsea Hike will gather at the start line at Old Mill Park in Mill Valley and race to the finish at Stinson Beach in the Golden Gate National Parks—marking a century of trailblazing female athletics.

The inaugural Women’s Dipsea Hike took place on April 21, 1918; it not only opened the door for women to participate in feats of endurance, but highlighted their athletic prowess and a competitive nature which rivaled that of the men.

The pivotal Women’s Dipsea Hike occurred at the tail-end of World War I, before women had full voting rights. During this unique chapter of history, women’s roles in society evolved dramatically. Throughout World War I, more American women than ever before took leadership roles in wartime efforts through entrepreneurship and ingenuity, replaced men in vacated jobs when soldiers were sent to the battlefields, and actively supported the U.S. military as nurses, yeomen, clerical workers, or “Hello Girls” operating switchboards.

According to the National Museum of American History, “many women saw their wartime service as a way to claim full citizenship,” which propelled the ideology behind the suffragette movement and the ratification of the 19th amendment in 1920.

Nonetheless, back in 1918, the Amateur Athletic Union prohibited women from running competitively. Thus, the women’s Dipsea race was promoted as a “hike” to allow women to participate—as there was widespread concern over the effects of strenuous physical activity on women’s bodies and morals (read more in Rita M. Liberti’s "Trailblazing in Marin: Women’s Dipsea Hikes, 1918-1922,” California History 81, no. 1 (2002): 54-65, doi:10.2307/25177665).

According to Dipsea Race historians, the Women’s Dipsea Hike was the first women-only cross-country racing event of its kind in the United States, making it a watershed moment in American history that took place in the small community of Mill Valley.

In honor of Edith Hickman, the first champion of the Women’s Dipsea Hike, her daughter, Barbara “Bobby” Van Meurs, will kick off this year’s race. After running, walking, and hiking seven miles from Mill Valley to Stinson Beach, pre-registrants are invited to attend the post-race celebration at the Stinson Beach Community Center featuring guest speakers from across the Bay Area with strong personal and professional ties to the Women’s Dipsea Hike.

The Parks Conservancy’s Roving Ranger will also be on-site at the start and finish of the race to share information about Mt. Tam, One Tam, and the partnering organizations that support the mountain’s unique ecosystems.

Although registration is closed for the women’s hike on April 21, community members are encouraged to cheer on the participants! Spectators can gather at Old Mill Park at 7:30 am for the start, or at the post-race celebration in the south parking lot of Stinson Beach (11 am to 2:30 pm).

The 2018 Women’s Dipsea Hike is directed by the Dipsea Race Committee and co-hosted by One Tam, the Golden Gate National Parks Conservancy, and the National Park Service (NPS). The entities that comprise One Tam (the Parks Conservancy, NPS, California State Parks, Marin County Parks, and Marin Municipal Water District) work collaboratively to manage, restore, and protect habitats and resources on Mt. Tam.

Attendees will have the opportunity to learn about and support One Tam projects, including one of several large-scale efforts to improve the Redwood Creek Watershed, such as installing an official Dipsea Trail bridge that spans Redwood Creek. Installing a bridge would reduce sediment disturbance, preserve important habitats, and protect endangered and threatened species, like the coho salmon, in addition to providing hikers a safe and dry passage across the creek.

The Dipsea Women’s Hike is a beloved local treasure and is integral to the culture and history of Mt. Tam and its surrounding communities. It is an honor for the Parks Conservancy to work alongside the Dipsea Race Committee and sponsors Mill Valley Recreation Department, Mill Valley Historical Society, Carey Hagglund Condy / Pacific Union Real Estate, Equator Coffees & Teas, Three Twins Ice Cream, The Hivery, Piazza D’Angelo, The Redwoods Community of Seniors, Title Nine, and Bungalow Munch to bring this historic event to life.