Final Alcatraz reunion: A historic day on the Rock

From escape attempts to Santa, the best stories shared about life on Alcatraz 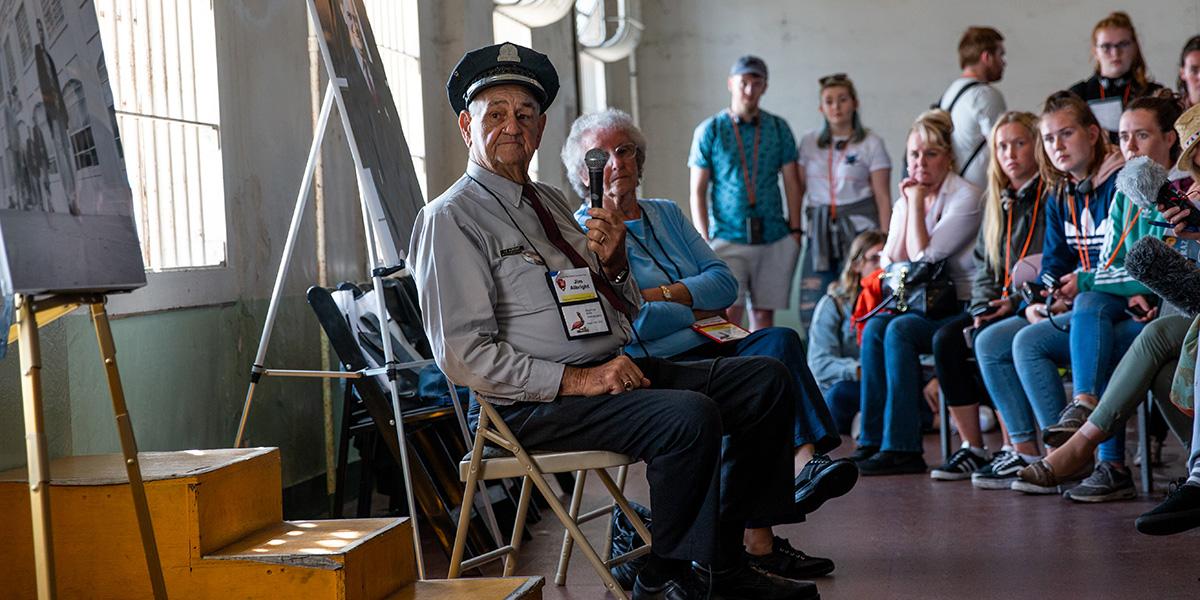 Alcatraz visitors streamed into the jail’s former dining hall on Sunday, August 12, most with their Alcatraz Cellhouse Audio Tour headphones still sitting on their heads. But slowly, one-by-one, they noticed what was going on. So they took off their headphones and gathered around.

Jim Albright was talking about fishing off Alcatraz in the middle of the night.

Albright was one of several former guards and other Alcatraz residents embodying the living history of the island on the special day, the last formal reunion of the Alcatraz Alumni Association. The association faces dwindling numbers, and this was the last of many formal gatherings on the Rock. But the stories of Alcatraz residents will still be told in several different forms.

Albright, whose book "Last Guard Out" is one of those, was riveting the group with stories about the massive schools of bass that would swim by the island. Guards would sign up for fishing shifts, some even willing to take early-morning hours, with hauls large enough to feed the “main line” of guards and prisoners.

The last reunion was filled with those surreal stories of island self-sufficiency meeting San Francisco life.

Mary Hart, a caretaker on the island after it closed as a penitentiary, told of newspapers being delivered via KGO traffic helicopter (the pilot, Lou Herly, had befriended the Harts).

Bill Rutter, who lived on Alcatraz as a kid, told of being paid a nickel to reset pins at the island’s bowling alley (older kids were paid 10 cents), and how the Easter Bunny and Santa would still “visit” the island. But Santa would never bring toy guns, bows and arrows, or dogs and cats, which were all strictly forbidden.

"People ask what it was like to grow up on Alcatraz," Rutter said. "What was it like growing up in your neighborhood? I didn’t know any different."

Rutter apologized to the crowd gathered around him in Cell Block A for speaking from his written notes. He had a stroke earlier in 2018 and his short-term memory loss was shot. But his long-term memories of island life were unique, and highlight why the ideas from the reunion will continue to live on.

This might be the last time the former residents gathered under the guard tower to take a group photo, but there are many ways to learn those first-hand tales. Guard George DeVincenzi and others have regular speaking engagements and book signings on the island.

You might get lucky and catch former inmate William G. Baker, whose book "Alcatraz #1259" is one of the top sellers on the island, with much of the proceeds going back into island restoration projects via the Golden Gate National Parks Conservancy. Baker regaled alumni day crowds with tales from inside the cell, or you can see an interview with him above.

But of course everybody wants to hear about escape attempts and the infamous 1962 escape of three inmates. For that, you turn to Jolene Babyak, who lived on Alcatraz as a kid and wrote “Breaking the Rock” about the '62 escape. Babyak told the dining room crowd the hidden history behind the incident: When the prison switched from 10-man dining tables to 4-man dining tables, it allowed brothers John and Clarence Anglin and Frank Morris to scheme in relative peace.

Many stories are captured in the award-winning Alcatraz Cellhouse Audio Tour, available in 11 different languages. So while many people took off their headphones to listen to the stories at the reunion, you can put them on to hear those same stories in a rich audio experience. You can get your Alcatraz tickets here.