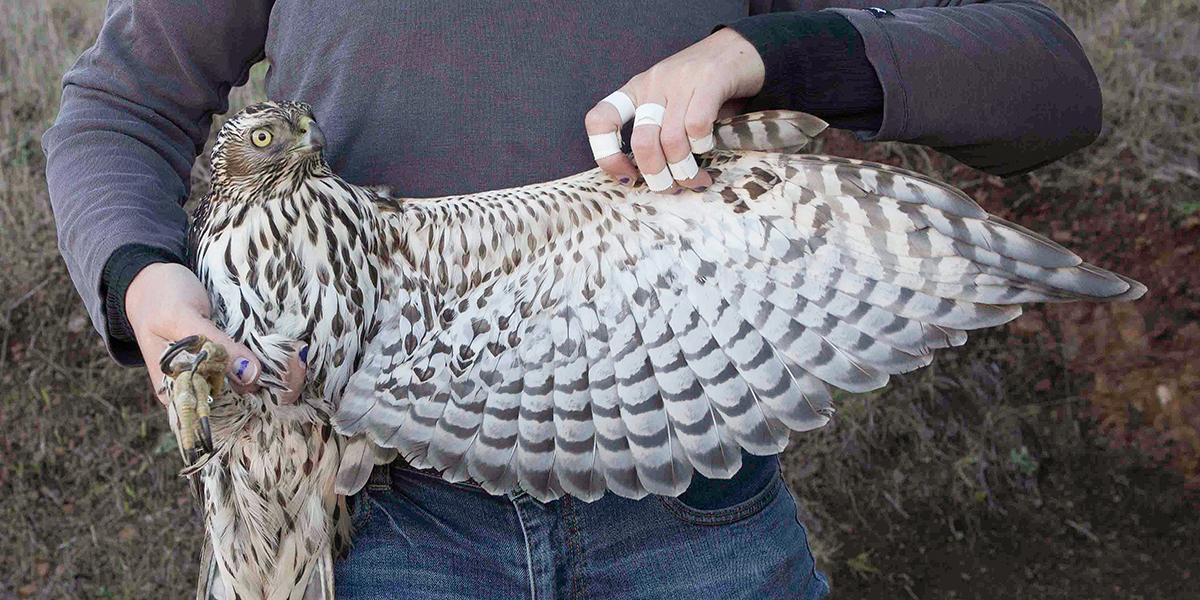 In late November 2015, GGRO scientists captured and banded this juvenile Northern Goshawk, only the sixth in the 30-year history of the program. The goshawk’s preference for mature forests makes it an extremely rare visitor to the Marin Headlands. Jeff Robinson

About 40 students and interns from the Golden Gate Raptor Observatory (GGRO)—a Parks Conservancy program in cooperation with the National Park Service (NPS)—took on the nitty gritty details, from handling projectors and chauffeuring field trips to selling T-shirts and answering questions. At the Saturday night banquet, 180 people gave a standing ovation to the local committee, essentially GGRO staff and volunteers.

So, how did the scientific sessions go? Great, by all comments I heard. We had 150 speakers and another 50 posters presented. There were half- and full-day sessions on "Golden Eagle Biology," "Climate Change and Raptors," "Wind Farm Effects on Raptors," "Ecology of Island Raptors,” and "Diseases and Toxins in Raptors,” the last hosted by the UC Davis California Raptor Center.

The plenary speaker was Dr. Peter Bloom, who has spent much of his career working with National Audubon Society in Southern California, and whose five decades of work have given him valuable perspectives on the biology and conservation of raptors in the state.

A big theme for the conference and the RRF board was creating in-roads into the science and craft of raptor biology for young professionals. This was helped greatly by the 84 GGRO volunteers and other donors who gave a little bit more (some gave a lot more!), so we could offer students a lower registration fee. As a result, we had an impressive 90 student participants.

Students could also attend one of six classes on raptor techniques, each taught by an expert in the field. Among the classes: "Satellite/Radio Telemetry," "Climbing to Nests," "Trapping and Handling," "Blood Sampling," and "Ageing, Sexing, and Molt" (this last class was taught by our own Buzz Hull, with field-guide author Bill Clark.)

Perhaps the high point of the Sacramento meeting was the 50th anniversary celebration of the Madison Peregrine Conference. In 1965, Professor Joe Hickey (successor to Aldo Leopold) hosted the first gathering of biologists to discuss the decline of the Peregrine Falcon.

Held at the University of Wisconsin-Madison, this may have been the first conference of any group of biologists to consider the conservation needs of a species that was neither fish nor game. The four-day session was a pivotal point in U.S. conservation biology, setting the stage for an astonishing 40-year Peregrine recovery effort.

Five participants from that historic meeting made their way to Sacramento to be part of our 2015 panel, while three others sent videos. All eight addressed many of the same points: (1) the Madison Conference set the agenda of their life’s work; (2) the Peregrine recovery seemed at first to be an impossible goal; (3) an incredibly cohesive effort from an incredibly disparate group of people created the phenomenally quick species recovery that we know about today. (By 1999, Peregrine populations had recovered so dramatically that the species was taken off of the U.S. Endangered Species list.)

It’s one thing to report on this 90-minute panel discussion now; it is another to have been there. The event was extremely moving. I’m sure this was different for each listener. But for me, each panelist was deep in his thinking and articulate in his memories and message, which often went far beyond Peregrine Falcons.

The common thread was really how a difficult and seemingly unsurmountable ecological disaster was overcome. Of course, that story comes from a far simpler time and place than California in 2015. How much more complicated life is today, between economic inequality, the overuse of technology and energy, and the massive carbon footprints we leave behind. But still, the Peregrine story has some hope in it, and perhaps some strategy as well. We did something right.

For those who might want to delve deep into the abstract “summaries” of the 200 papers presented at RRF2015, you can download the entire document—which was designed by GGRO bander Lynn Bantley and illustrated with California raptor photos.

The 2015 Raptor Research Foundation conference was made possible by more than 90 donors, including individuals and corporate foundations. My sincere and deep thanks go to the GGRO volunteers; to the Greg Hind Endowment; to businesses CH2MHill, Garcia and Associates, HT Harvey and Associates, Pacific Gas and Electric, and Bloom Biological; to the UC Davis School of Veterinary Medicine; and to the University of Nevada-Reno, Academy for the Environment.

Finally, we at the GGRO couldn’t have done this without the motherships, that is, without the Parks Conservancy and NPS. My great thanks to all the staff who stepped in and helped, but specifically Jan Nunes, Svetlana Tkachenko, JMark Jenkins, Nicolas Elsishans, Sharon Farrell, Cathie Barner, Zach Rattay, Mike Moser, Simon Chow, Bill Merkle, Bill Prochnow, and Daphne Hatch.