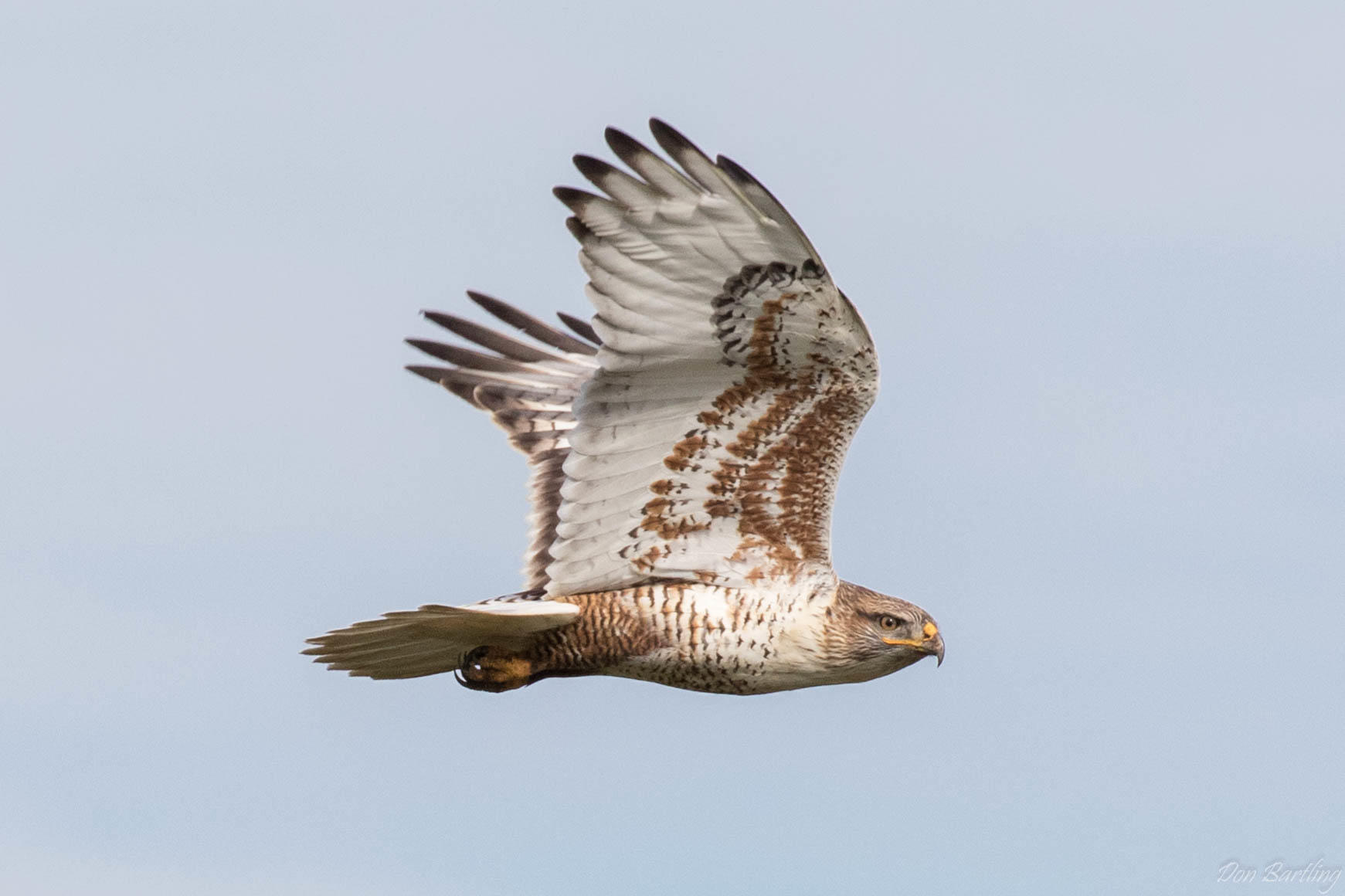 This is one of the most often-spoken statements by hawkwatch volunteers at the Golden Gate Raptor Observatory (GGRO), and understandably so.

The Ferruginous Hawk (known as the “ferrug” in hawkwatcher short-hand) is so named for the rusty-brown color infused on adults’ heads, backs, and upperwings. In the world of chemistry, rust is oxidized iron, or ferrous oxide. Add a couple letters and “ferrous” become “ferruginous.” The hawk’s scientific name also indicates its magnificent physical appearance: Buteo regalis, which literally translates from Latin as “royal soaring-hawk.”

Often confused for an eagle because of its size, the Ferruginous Hawk is the largest North American buteo, the genus of hawks that includes Red-tailed Hawks, Red-shouldered Hawks, and Broad-winged Hawks. Identified by its characteristic long, tapered wings, large head, and robust chest, the Ferruginous Hawk is one of only three North American diurnal raptors to have legs feathered all the way to the toes (the others being Rough-legged Hawks and Golden Eagles). In adults, these leg feathers are rusty-brown, forming a distinctive red “V” shape when seen in flight, which stands out against a background of white tail coverts.

The underside of the Ferruginous Hawk is mostly pale white; this pale coloring, combined with its large size, sets it apart from other hawks seen at the GGRO. All ferrugs have white chests, while the underwings show variable amounts of markings—rust-colored in adults and brown in juveniles.

Perhaps the most striking feature of these hawks, however, is the rusty tail when seen from the dorsal side. In flight, the underside of the adult tail looks completely white, sometimes with light barring or some rust color shining through, if the bird is backlit. Juveniles often show two to three gray bands towards the tip on the otherwise white tail.

During my first visit to Point Reyes National Seashore, I spent almost an hour watching a juvenile Ferruginous Hawk hunting over the grasslands. Using its long wings and tail to hang in the air while moving its head back and forth, the hawk actively searched for jackrabbits and ground squirrels. Occasionally, it would stoop down and fly low over the ground before returning to its height to continue looking for prey. Cooperative hunting has also been reported in Ferruginous Hawks, in which a male and female work together to catch prey.

For the motivated hawkwatchers, there are a few great places in the Bay Area to see Ferruginous Hawks overwintering. In Point Reyes, Pierce Point Road and the trail to Abbott’s Lagoon are surrounded by grassland habitat, ideal for seeing Ferruginous Hawks. Other areas worth checking out include Livermore Valley in Alameda County, Chileno Valley on the Marin-Sonoma County border, and the southern extension of Chalome Valley between Highway 41 and Bitterwater Road. The best time of year to look for Ferruginous Hawks in these areas is between December and February.

Seeing a Ferruginous Hawk from Hawk Hill is quite a treat. Although a sighting is rare, it is clear why hawkwatchers consistently consider this elusive bird to be truly glamorous!

(Thanks to Allen Fish, Bob Power, and Tim Behr for tips on where to find wintering Ferruginous Hawks!)