Go-Go Boots and the Green and Gray 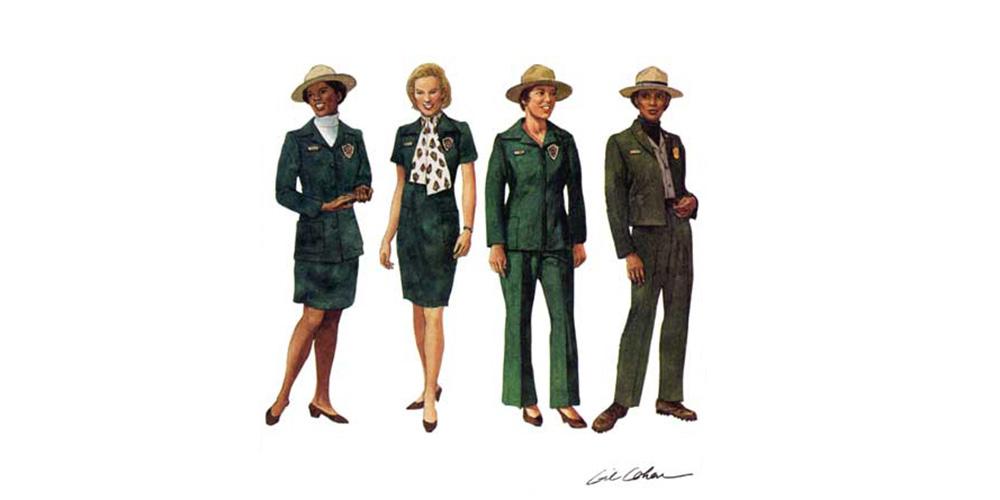 The 1974 uniform regulations brought forth the fourth uniform change for women in fourteen years. Gilbert B. Cohen, artist/NPSART 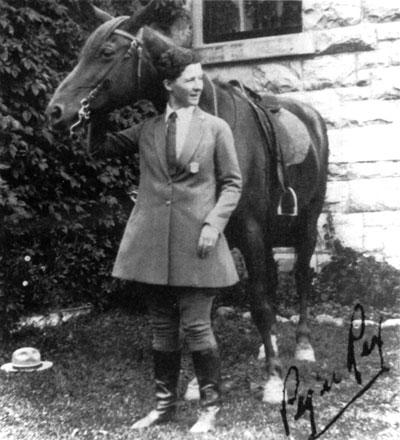 In the early days of the National Park Service, women were involved in a very limited capacity—as seasonal employees, temporary fill-ins, naturalists, or assistants to their ranger husbands. As a result, their “uniforms”—if they had any—were improvised. Some adapted the men’s uniform, tailored for a woman (1). Others cobbled together a uniform of their own design (2). 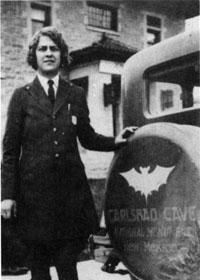 A big step toward standardization was the incorporation of Carlsbad Caverns into the National Park Service. Women worked as guides in the caverns, and they were outfitted with a uniform (4). Every park was different, however, and a variety of styles could be seen through the 1930s (3). 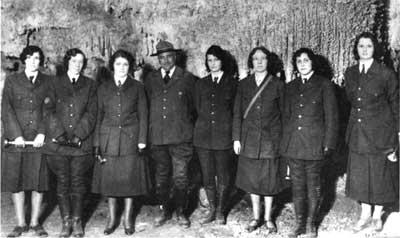 In fall 1941, a committee of women was assembled to consider the uniform issue. But the U.S. was plunged into World War II with the attack on Pearl Harbor that year, and the matter was tabled. 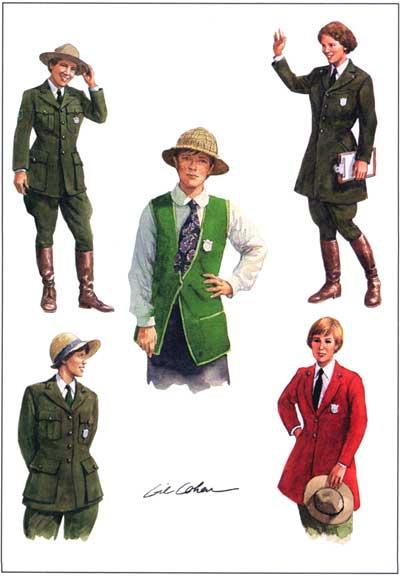 It wasn’t until June 1947 that a standard uniform for women was authorized (and then only under the segregated “Special Uniforms” section of the official policy). But, at last, there was progress toward recognizing women as a full member of the NPS establishment (5). The uniform was an adaptation of the militaristic Women’s Auxiliary Army Corps (WAAC) blouse, and women complemented the look with the fashionable Army “overseas” cap (6). 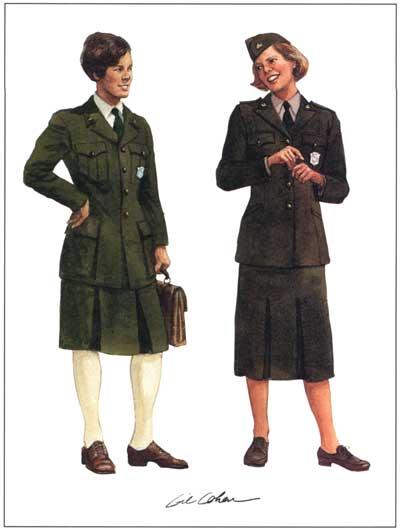 The next phase in the evolution took place in 1961, when new regulations went into effect. This was the dawn of the “airline stewardess” epoch, as the new uniform was modeled after those worn by American Airlines flight attendants (7) (8).

In a way, the look—which pigeonholed women for a certain type of “feminine” work—reflected a written statement issued by the NPS in 1960, noting that while the agency should “employ in its uniformed positions the best qualified men and women available...women cannot be employed in certain jobs, such as Park Ranger or Seasonal Park Ranger...in which the employee is subject to be called to fight fires, take part in rescue operations, or do other strenuous or hazardous work....” 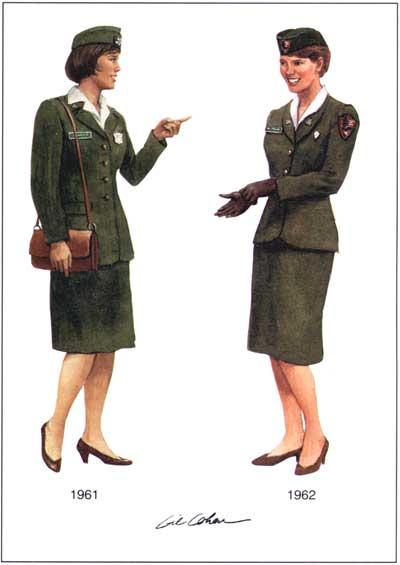 Furthermore, at certain parks, women were not authorized to wear the official NPS badge. Instead, they were issued a “silver arrowhead pin” the size of a tie tack—“in lieu of badge” (9). 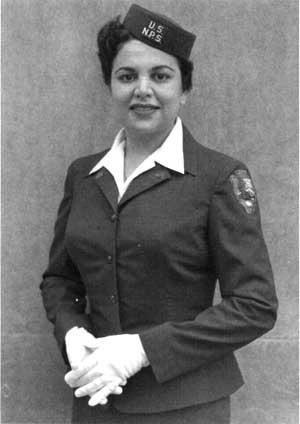 The “stewardess” uniform proved to be limited in its utility for the range of functions that women performed in the Park Service, and many expressed their frustration. Its redesign was made a priority for the 1968 Uniform Committee. 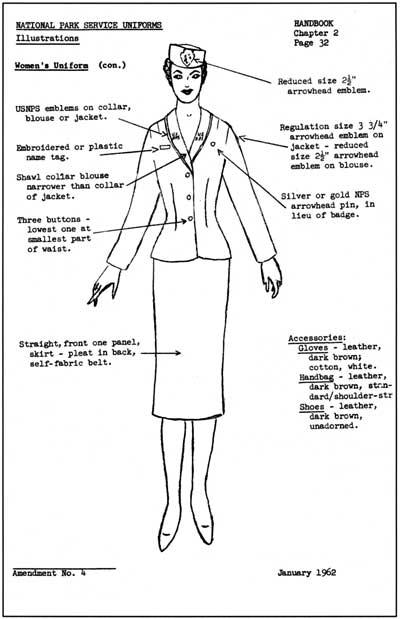 The NPS consulted experts, led a fact-finding mission to survey women across the NPS, and convened a “think tank” of women in Washington, D.C. A brand-new look was introduced in early 1970, and enthusiastically approved soon after (10). The radically altered uniforms made their first public appearance at a “Grand Unveiling” in June (11). 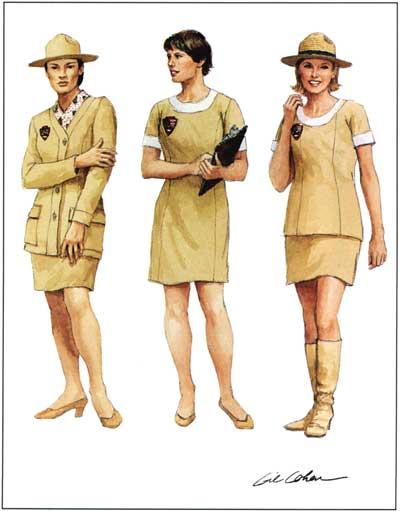 After the initial excitement, women in the field soon found the new uniforms to be more style than substance (12). The material and design simply didn’t hold up when it came to dealing with a brush fire, offering protection from the elements—or even physically supporting a badge. 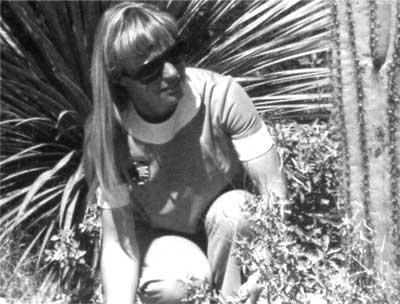 Renegade attempts at various parks to offer more practical attire—as well as complaints and even resignations over the uniform—led to another series of redesigned uniforms, which appeared in 1974 (13). 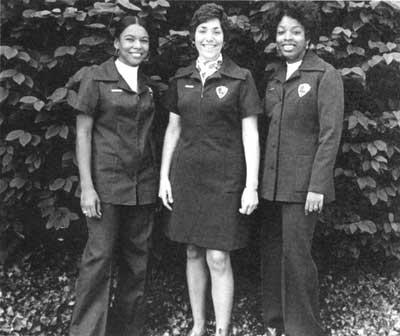 Three lines were developed, and the “A line” was derided as the “McDonald’s” uniform, for its similarities with the uniforms at fast-food establishments (14). But another one presaged the future; the “Women’s Traditional Uniform” was essentially the same as the standard men’s uniform—and represented a major breakthrough for the treatment of women as full equals with men (15) (16). 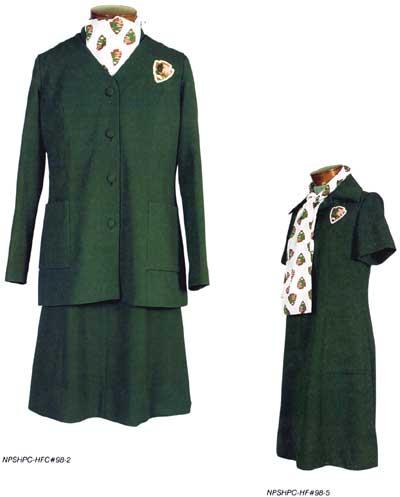 Finally, in spring 1978, the National Park Service authorized women to wear the same “green and gray”—in all its forms—as their male counterparts (including the badge!). 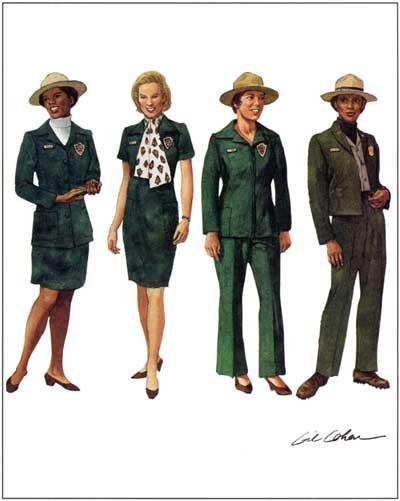 There were some differences, of course, in the women’s line of uniforms. For example, a maternity “jumper” or maternity top (17), and the option to wear a skirt. Today, as it was when the option was first officially sanctioned, the vast majority of women prefer to wear pants (18).

Note: Images and information culled from an extensive online book issued by the National Park Service.