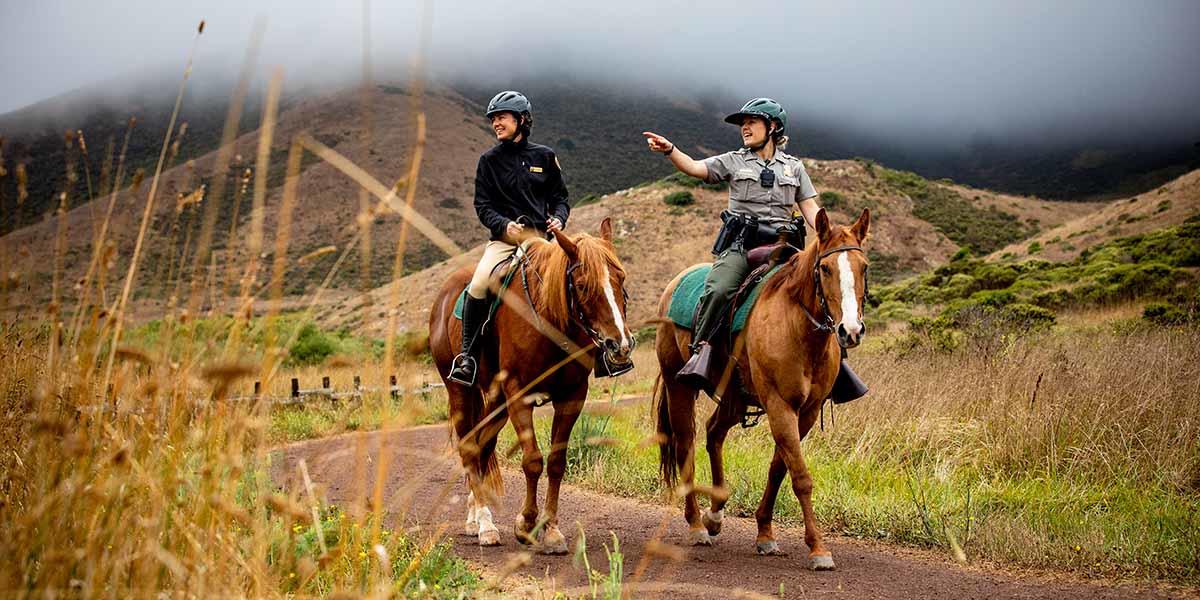 By Michelle Robertson
For the Parks Conservancy

About two miles past the Baker-Barry Tunnel down Bunker Road, you’ll find a massive balloon hangar and a series of former carports tucked among the fog-covered green hills of the Marin Headlands.

The Horse Mounted Patrol is the only program in the GGNRA that allows volunteers to ride National Park-owned horses. The 43-year-old program is unique in that it’s run entirely by volunteers—some of whom have served for close to three decades. GGNRA volunteers are coordinated by the National Park Service (NPS), the Golden Gate National Parks Conservancy, and the Presidio Trust.

“There hasn’t been much turnover—it’s such an amazing program,” said Lainie Motamedi, the volunteer personnel lead for the horse program, on a warm Wednesday morning at the Rodeo Valley stables. By 10 a.m., Motamedi had finished the bulk of her chores already: feeding, grooming, picking hooves, mucking corrals and stalls and exercising the well-behaved horses.

After completing their chores, volunteers can saddle up and take the horses out on the trails, where they serve as additional eyes and ears for park rangers. They report violations, assist in search and rescue efforts, and help visitors with questions and education. The horses sometimes travel beyond park limits—to schools or public gatherings—to serve as ambassadors for the parks.

“If you’re on horseback, it draws visitors in,” she said. “People want to talk to you, unlike when I’m in my car.” 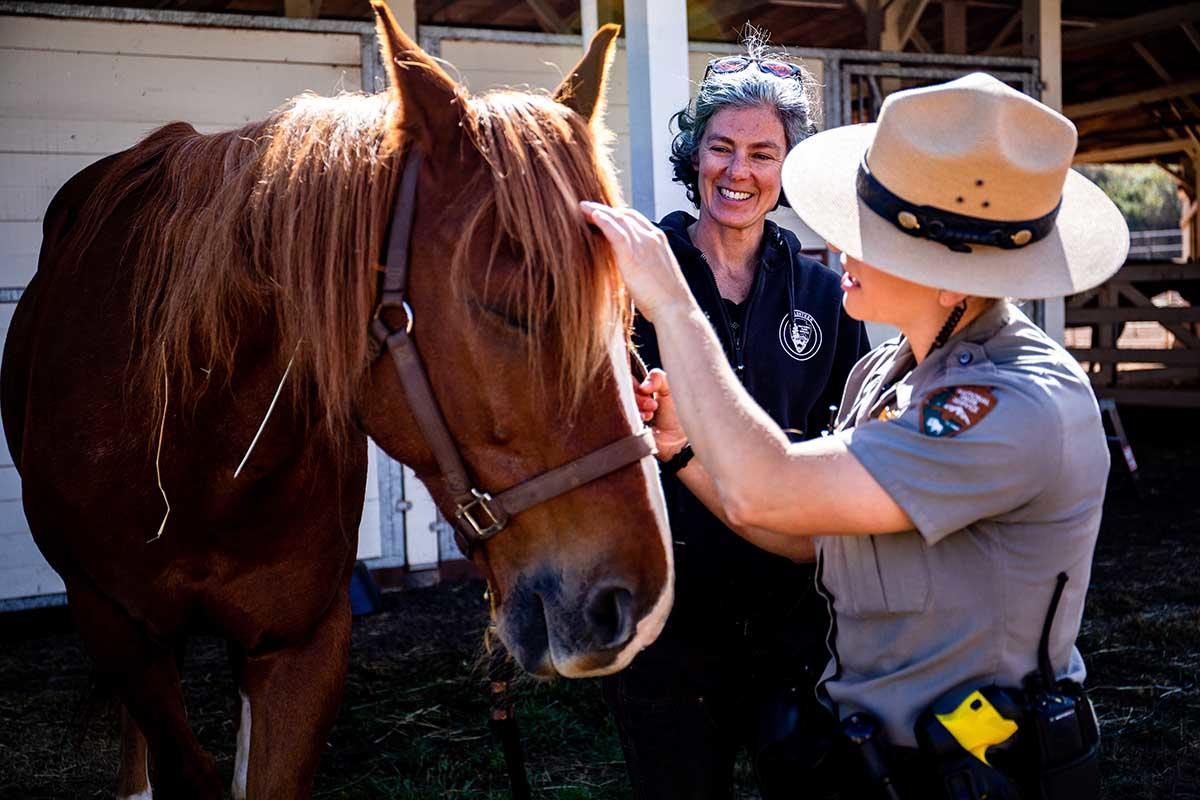 Horses play a little-known role in the storied history of our national parks. The very first parks—Yellowstone and Yosemite—were patrolled on horseback. Before park rangers were entrusted with law enforcement, the United States Cavalry kept order in federally sanctioned wilderness. When it comes to trekking across dirt trails and ascending steep hills, horse hooves can carry rangers where tires wouldn’t dare tread. And because horses travel faster than humans, they serve as invaluable transportation for first responders.

The Horse Mounted Patrol was established in 1976, soon after the GGNRA’s creation, said barn manager Richard Kohn in an email sent to volunteers. It wasn’t until the early 1980s that the idea of a volunteer mounted patrol came to fruition at Tennessee Valley, to ease the increasing demand on rangers’ time. The first group of volunteers numbered about six, including Kohn. In 2017, the program moved from its longtime home at Tennessee Valley to its current residence at the Rodeo Valley Stables, which also houses horses from the Presidio Riding Club.

Here, it came under the command of Ranger Katlyn, who plans to continue expanding the patrol’s outreach efforts through school visits and a forthcoming website.

Even with its limited online presence, the patrol has no shortage of eager volunteers. There is currently a waitlist for volunteers, though interested parties with experience around horses are encouraged to reach out to Ranger Katlyn at katlyn_grubb@nps.gov.

There was a notable absence at the stables on the aforementioned Wednesday morning. In June, a longtime member of the patrol died due to complications from cancer: a beloved 17-year-old sorrel gelding named Stinson. A memorial for Stinson sits in the Rodeo Valley office, and the date of his last ride, May 14, remains scribbled on the whiteboard.

The patrol is currently fundraising to purchase a new horse to ease the load on the rest of the team—and to keep Leo company. “He needs a buddy!” Lainie said.

The Parks Conservancy is helping to raise the funds. To donate, visit www.parksconservancy.org/donate/tributes-memorial-gifts and write “Stinson” or “Horse Patrol” as the honoree. Or you can call Elissa Ziegler at 415-561-3080 to make a gift.