Let’s Get Together: Mixed Species Flocks 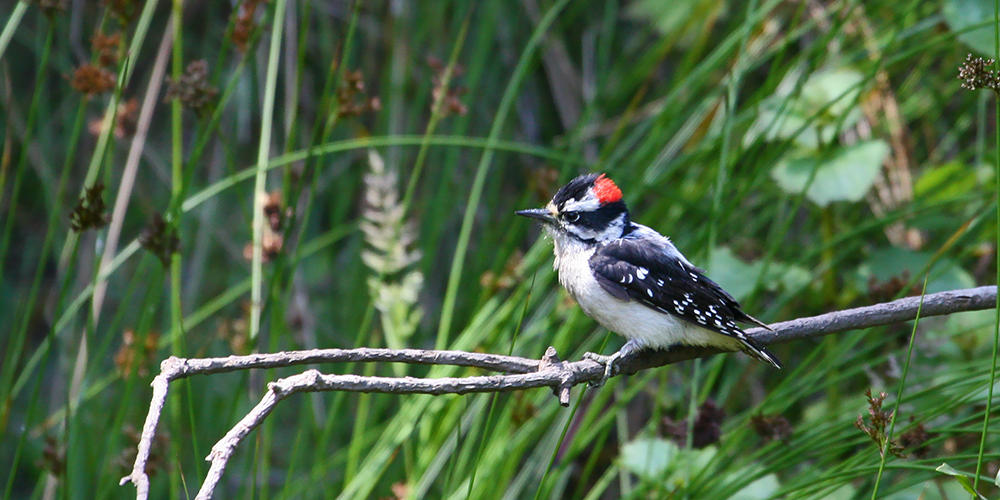 Downy woodpeckers are able to occupy areas with few trees because they forage on weedy stems—in addition to engaging in the characteristic woodpecker behavior of feeding in trees. While downy woodpeckers can form groups with other species, the two sexes rarely forage together. Males feed on smaller branches and stems, which usually offer the most food. Females forage on larger tree trunks, but will move into the former feeding area when males are not present.

For both sexes, foraging leaves them vulnerable to predation by rats, domestic cats, birds of prey, and sometimes even other woodpeckers (the downy is the smallest of its kind in North America). To reduce the high risk of predation, downy woodpeckers have been reported to utilize the help of other bird species, especially in the winter months.

Chickadees or titmice may serve the watchful eyes, allowing the group to forage with less trepidation. Additionally, these songbirds are perhaps better at warning the group of danger than woodpeckers, who make sounds by drumming their beaks on trees.

Mixed-species flocks of birds are more common during the non-breeding months. This makes sense, because populations in search of a mate need to stay near their own kind. The migration patterns of some bird species can make the composition of a mixed flock very dynamic. Keep an eye out, the best time to spot a collaborative flock is right now, during the winter.

Mixed species flocks are not an uncommon occurrence. To find food or avoid being food, many birds have found that the trick is to team up with species that see, hear, fight, or forage better than they do. As they say, two heads—or species—are better than one!