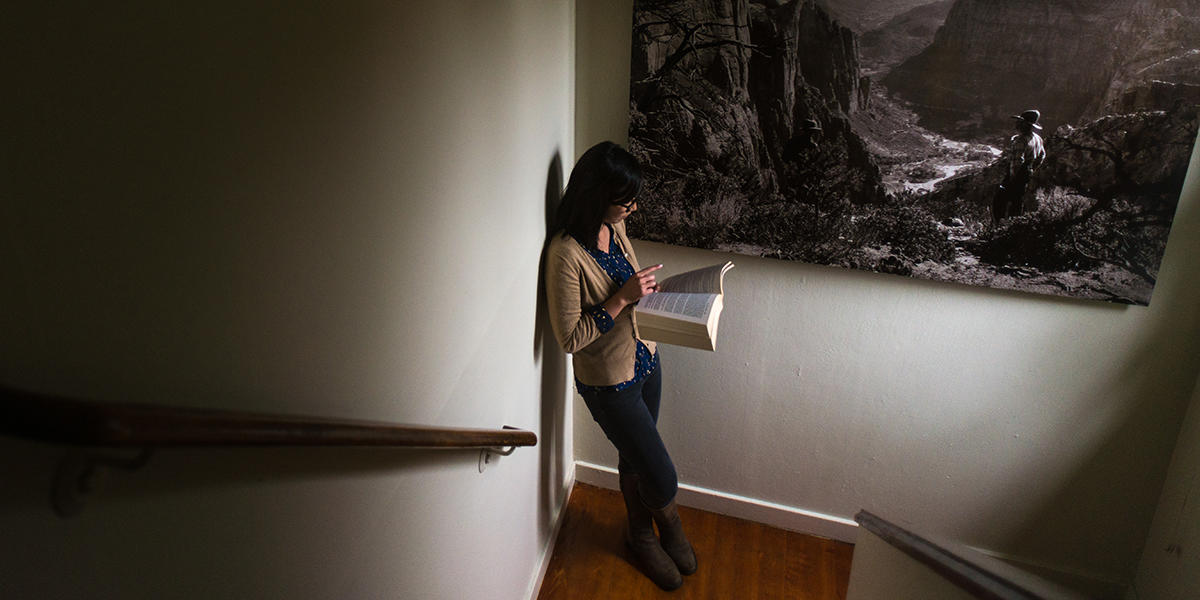 Captivated by a book in solitude Paul Myers/Parks Conservancy

Capturing the majesty and the experience of natural settings through written language is a tradition as rich and time-honored as the land itself. In honor of National Poetry Month, we present to you six poems inspired by the superlative scenery of the Bay Area and the Golden Gate National Parks:

Uniformly over the whole countryside
The warm air flows imperceptibly seaward;
The autumn haze drifts in deep bands
Over the pale water;
White egrets stand in the blue marshes;
Tamalpais, Diablo, St. Helena
Float in the air.
Climbing on the cliffs of Hunter’s Hill
We look out over fifty miles of sinuous
Interpenetration of mountains and sea.

Leading up a twisted chimney,
Just as my eyes rise to the level
Of a small cave, two white owls
Fly out, silent, close to my face.
They hover, confused in the sunlight,
And disappear into the recesses of the cliff.

All day I have been watching a new climber,
A young girl with ash blonde hair
And gentle confident eyes.
She climbs slowly, precisely,
With unwasted grace.

While I am coiling the ropes,
Watching the spectacular sunset,
She turns to me and says, quietly,
“It must be very beautiful, the sunset,
On Saturn, with the rings and all the moons.”

A Massive Dying Off

When the fish began their dying you didn’t worry.

Even the box they shipped in was beautiful, bejeweled.

You tore through masses of swaddling paper,

in all that cardboard by what

must have been someone’s tiny, indifferent hands.

The five-fingered sea stars you heard about on NPR.

You must have been driving to Costco.

It must have been before all the visitors arrived.

At Costco, everything comes cheap.

Sea stars, jellies, anemones, all the scuttlers and hoverers

and clingers along the ocean floor. A massive dying off, further displacing

You plugged in your iPod.

Enough talk. You’d found the song you had been searching for.

right onto the shore.

You’ve been sitting in your car

watching the sunset over the Golden Gate.

Those who can are leaving.

fog so thick on their side of the bay

you can’t tell crag from cloud from sea.

One cargo ship headed out, another coming in.

They’re looking for a place

where they can breath.

You’ve been here less than an hour.

When the sun has finished setting

In the dream, your father is the last refuse to wash ashore.

This wasn’t what you wanted.

of trouble was the bottle with the message.

That washed up years ago.

Then, so many bottles

the stenographers couldn’t answer all the messages anymore.

The women of the village wept when your father died.

who translated their meaning

and had it writ out on a scroll.

These were the answers your people had been waiting for!

That papyrus wound around your father like a bandage.

you prayed proper prayers, loaded him onto an outrigger,

but here he is again. Stinking.

You can’t dispose of the rising dead and you’re worried.

What can you do?

Once by the Pacific

The shattered water made a misty din.
Great waves looked over others coming in,
And thought of doing something to the shore
That water never did to land before.
The clouds were low and hairy in the skies,
Like locks blown forward in the gleam of eyes.
You could not tell, and yet it looked as if
The shore was lucky in being backed by cliff,
The cliff in being backed by continent;
It looked as if a night of dark intent
Was coming, and not only a night, an age.
Someone had better be prepared for rage.
There would be more than ocean-water broken
Before God's last Put out the light was spoken.

Some scholars contend that this foreboding poem alludes to Frost’s childhood memory of watching his father swim from the shore of Sausalito out into San Francisco Bay. Although this routine exercise was repeated morning after morning, each and every time little Robert waited with great anxiety for his father’s “ok” sign upon reaching his target buoy.

The air is chill, and the day grows late,
And the clouds come in through the Golden Gate:
Phantom fleets they seem to me,
From a shoreless and unsounded sea;
Their shadowy spars and misty sails,
Unshattered, have weathered a thousand gales:
Slow wheeling, lo! in squadrons gray,
They part, and hasten along the bay;
Each to its anchorage finding way.
Where the hills of Saucelito swell,
Many in gloom may shelter well;
And others —behold— unchallenged pass
By the silent guns of Alcatras:
No greetings of thunder and flame exchange
The armed isle and the cruisers strange.
Their meteor flags, so widely blown,
Were blazoned in a land unknown;
So, charmed from war or wind or tide,
Along the quiet wave they glide.

What bear these ships? —what news, what freight,
Do they bring us through the Golden Gate?
Sad echoes to words in gladness spoken,
And withered hopes to the poor heart-broken:
Oh, how many a venture we
Have rashly sent to the shoreless sea!
How many an hour have you and I,
Sweet friend, in sadness seen go by,
While our eager, longing thoughts were roving
Over the waste, for something loving,
Something rich and chaste and kind,
To brighten and bless a lonely mind;
And only waited to behold
Ambition's gems, affection's gold,
Return as remorse, and a broken vow,
In such ships of mist as I see now.

The air is chill, and the day grows late,
And the clouds come in through the Golden Gate,
Freighted with sorrow, heavy with woe; —
But these shapes that cluster, dark and low.
To-morrow shall be all aglow!
In the blaze of the coming morn these mists,
Whose weight my heart in vain resists,
Will brighten and shine, and soar to heaven,
In thin white robes, like souls forgiven;
For Heaven is kind, and everything,
As well as a winter, has a spring.
So, praise to God! who brings the day
That shines our regrets and fears away;
For the blessed morn I can watch and wait.
While the clouds come in through the Golden Gate.

Seascape with Sun and Eagle
By Lawrence Ferlinghetti

soaring eagle setting sun
All that is left of our wilderness

“I like to think that ‘where a roller coaster used to stand’ refers to Playland by the Beach next to the Cliff House, and this eagle is one of the dozens that migrate past Hawk Hill each fall,” says Allen Fish, director of our Golden Gate Raptor Observatory—which does most of its work on and around Hawk Hill in the Marin Headlands.

A pearl-foam at his feet
The waters leap and fall;
The sentry treads his beat
Upon the sun-girt wall.

Bronzed of visage, he,
Stern, resolute as fate,
Guard of the inner sea—
Grim Watcher of the Gate.

Born of some mighty throe
From earth’s abysmal deep,
When, aeons, long ago,
The Dragon stirred in sleep.

Yet over him, merrily,
The winds blow East, blow West;
The gulls about him fly,
The fog-king wreaths his crest.

All day, sea-melodies
Blend with oarsmen’s stroke,
In the Fleet of the Butterflies,
The craft of the fisher-folk.

Then boom of the sunset gun,
The flash of the beacon-light,
Leaping, a warning sun,
To passing ships of night,

And the fleets of all the world
Salute him as they pass-
Viking of Seas empearled,
The Warrior, Alcatraz.

Coolbrith, nicknamed the “Sweet Singer of California” and later named the first poet laureate of the state, published this poem in 1907 in the Overland Monthly. In the introduction to this new work, it is noted “Miss Coolbrith’s home overlooks Alcatraz, and from her study window she regarded the grim island whilst writing the poem.”