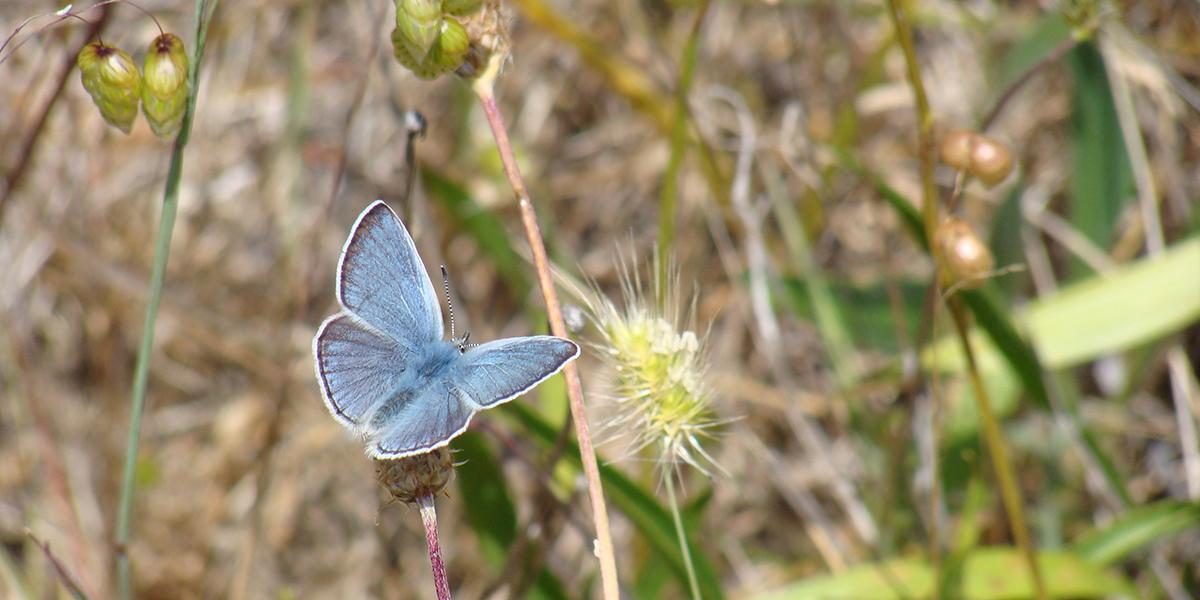 April 21 was an unusual day for a mission blue butterfly (Icaricia icarioides missionensis) nicknamed “Billie.” On that day, a gravid (mated) Billie was relocated from one site to another at Milagra Ridge and caged in a mesh cloth under the watchful eyes of a crowd of observers.

A team of habitat restoration specialists from the National Park Service and the Parks Conservancy watched patiently in hopes that this dusty-brown mission blue butterfly—a federally endangered species—would carefully deposit its eggs on the butterfly’s host plant of choice, the silver lupine (Lupinus albifrons).

Bill Merkle, a wildlife ecologist for the Golden Gate National Recreation Area, notes that mission blues are closely tied to the coastal grassland habitat, which used to be well-distributed throughout the Bay Area. However, development and population pressures have reduced these butterflies’ habitat to a smattering of disconnected places.

Relocating to a Healthier Habitat

At one of those places, Milagra Ridge in San Mateo County, Billie (named after blues singer Billie Holiday) was translocated to a hillside site where, according to Merkle, healthy host plants are concentrated.

Billie originally had been found at “the Quarry”—another sub-site at Milagra. The Quarry is a particularly hazardous spot for female mission blues to lay their eggs due to a fungal pathogen that has devastated the lupines and caused the dieback of leaves and flower stalks.

“If the leaves die, there is no food for the [butterfly] larvae; because they are so small, it is hard for them to travel to a healthy plant and they may starve,” says Christina Crooker, a restoration manager for the Parks Conservancy.

The Conservancy’s Park Stewardship team has been monitoring Milagra Ridge since 1995, and this is not the first time they’ve seen a fungal pathogen in the Golden Gate National Recreation Area. Crooker explains that in 1998 they saw it affect lupines at Milagra Ridge and the Marin Headlands and again in 2010 at Milagra Ridge, particularly in the Quarry. With this outbreak, Crooker mentioned that other mission blue butterfly habitats (Marin Headlands, the Skyline ridges, San Bruno Mountain, and Twin Peaks) do not seem to be affected.

“This spring, I became alarmed by the combination of low mission blue [butterfly] numbers and pathogen outbreak and concerned that mission blue eggs deposited in the Quarry would not be able to complete their lifecycle,” Crooker writes in a report about the translocation effort. “I reached out to Bill Merkle to discuss translocating any females found at the Quarry to disease-free lupine plants nearby.”

In response, Merkle hosted a phone conference with the U.S. Fish and Wildlife Service, the agency responsible for enforcing the Endangered Species Act, to discuss translocating female butterflies from the Quarry to pathogen-free lupines. All participants on the call agreed that a translocation should be attempted.

Thus began the hunt for winged candidates. Crooker and Ruby Kwan, a restoration specialist for the Parks Conservancy, ventured to the Quarry and monitored the area for females—not an easy task. While male mission blue butterflies have the signature sky-blue coloring on their wings, females are harder to spot because of their more muted, burlap-brown coloration.

Through the efforts of Crooker, Kwan, and other members of the Park Stewardship team, Billie was discovered at the Quarry on April 21 and Lady Blue (a second mission blue female) on April 23. They were translocated on their respective days through the same process.

Under the supervision of Stu Weiss, conservation ecologist at Creekside Center for Earth Observation who holds a special permit that allows him to handle butterflies, each mission blue butterfly was captured and placed in a container in a cooler. Ice packs slowed down the butterflies’ metabolism and helped keep them calm and inactive.

“Since they are insects and ‘poikilothermic’—meaning they have variable body temperatures depending on ambient environmental conditions—cooling like this is no problem for the butterflies,” Crooker says.

Both butterflies were moved to the hillside site and enclosed in a mesh cage over several healthy-looking lupine plants of different ages. Luckily for the emotionally invested observers, Billie and Lady Blue were not shy and deposited lime-green eggs that changed to an opaque white hue within a few minutes.

Some members of the team could barely contain their excitement—or their tears of joy. One veteran volunteer, Diane Darling exclaimed, “This is one of the best days of my life!” Stu Weiss noted that the “best scientific fallout from the Milagra transfers was the first good [accurate] estimate of the eggs [deposited by a female] per day.” From data from this translocation, Weiss and Crooker can now estimate that females lay approximately 80 eggs over their 8- to 9-day lifespan.

After the successful translocation, the mesh cage was removed near the end of the day, releasing each mission blue back into the wild. Flags were installed by the eggs as a way to mark the area for follow-up monitoring.

“We will track the eggs that were deposited under the cage and look for signs of young larvae this monitoring season [through May],” Crooker writes in the translocation report. “We will also be alert for the translocated adult butterflies in the course of our formal monitoring and search for eggs on other lupines [in the immediate vicinity].”

The eggs were expected to hatch within 6–10 days, but follow-up monitoring efforts revealed that some eggs took up to a month to hatch, which added new information to scientists’ understanding of mission blue biology. Kwan notes that all eggs were hatched by June 2, and feeding damage was found on at least one of the lupines—indicating that the plant hosts active caterpillars.

Within the next year, the larvae—if they survive—will develop into fully grown caterpillars that form chrysalises, from which the next generation of butterflies will emerge.

While mission blues have a short lifespan once they achieve adulthood (approximately a week), Lady Blue and Billie might be thankful to know their babies and their babies’ babies are being watched over by team of expertly trained caregivers.