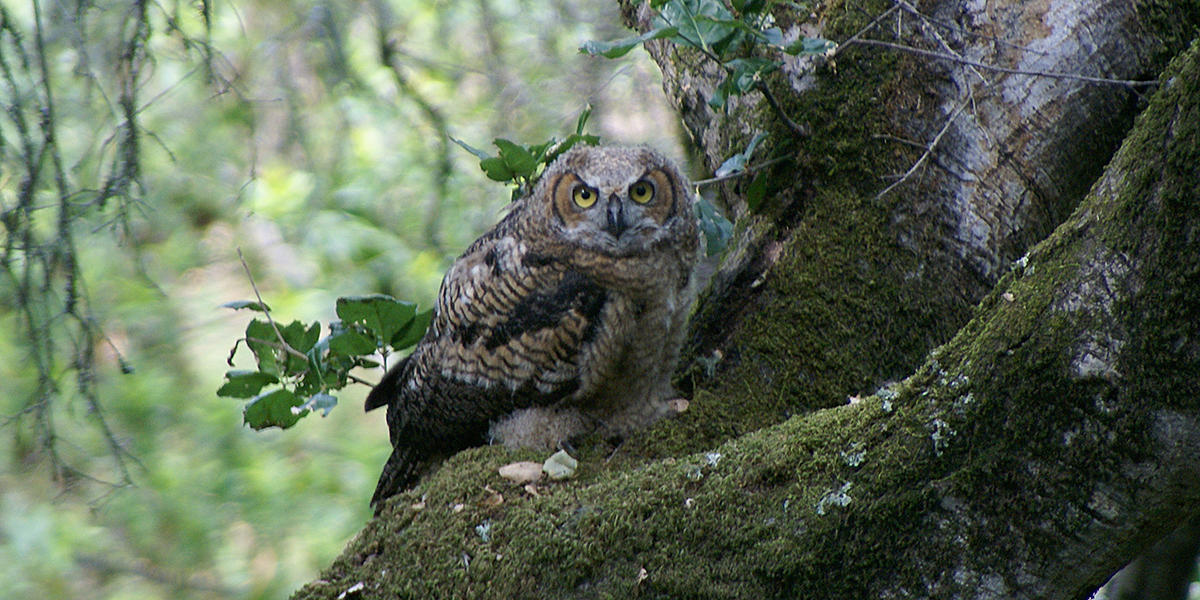 Recently, during a hike on one of northern California’s beautiful trails, I found a tail feather from a Great Horned Owl (Bubo virginianus). It was a long wing feather—mottled shades of white and brown and covered in fuzz, a signature of many owl species.

The feather was an interesting reminder of some of the adaptations that owls have for survival. Great-horned Owls are rapacious predators and span North America from coast to coast. Their ability to tolerate people and hunt everything from mice to other birds of prey make them a formidable predator.

Owl feathers in particular are fascinating and serve many functions. They serve as insulation (think: down jacket), camouflage, and a means of stealth. The first two functions are common among many species of birds. Camouflage helps owls stay undetected from predators and potential prey—and limits harassment by other birds, which often see owls as a threat and will dive on them to drive them away. So if you hear jays and crows insistently calling from one place, it may be worth a look to see who they are harassing!

As most owls are nocturnal, sound is a very important aspect of their lives. Their excellent hearing allows them to track down and silently ambush prey. Owl feathers help them remain quiet. One adaptation is the comb-like leading edge of feathers in the wing. This allows the turbulence that comes off the wing—a cause of noisy flight—to be broken up. In addition, owl feathers are covered in a soft velvet-like structure that dampens sound. Finally, owl wings are large and have a lot of surface area relative to their body size. While this feature may make them slow, it also prevents them from having to flap as much—thus helping maintain their silence.

Another adaptation to sound is the owl’s facial disk, made up of stiff feathers that form a veritable “satellite dish” around each eye and direct sound to the ears. Owls can control this disk to focus on sounds at varying distances.

To help detect the origins of a sound, most owls have ears that are asymmetrically located in the skull. This means that, unlike humans with our symmetrical ears, owls are very good at locating sounds in three-dimensional space. In fact, Barn Owls can hunt in complete darkness, and Great Gray Owls can hunt voles and other small mammals that are covered by many inches of snow—by listening for their movements.

Naturally, owl vision is also very good, but adapted towards darkness. They have large eyes to collect a lot of light. Their eyes are so big, in fact, that they have lost the muscles that move eyes around in their sockets (what allows us to look around without turning the head). But that loss is likely what led to the ability to turn their head 270 degrees in either direction—compared to a human’s ability to rotate only about 90 degrees in either direction.

Owls also have a tapetum lucidum behind each eye—a reflective surface that bounces light back toward the photosensitive cells in the eyes to give the cells a “second chance” to detect differences in light. This is what makes owl eyes “glow” at night, with even a small amount of light. The same effect can be seen with cats at night; cat eyes seem to glow as the light bounces off the tapetum lucidum and back out of the eye.

Owls certainly are not the wise creatures of the night often described in folklore. However, they are well-adapted to their niche. While they are no more specialized than any other bird, their adaptations to the quiet dark are interesting to think about when we are lucky enough to run across evidence that we have crossed their path—like a feather on the ground.