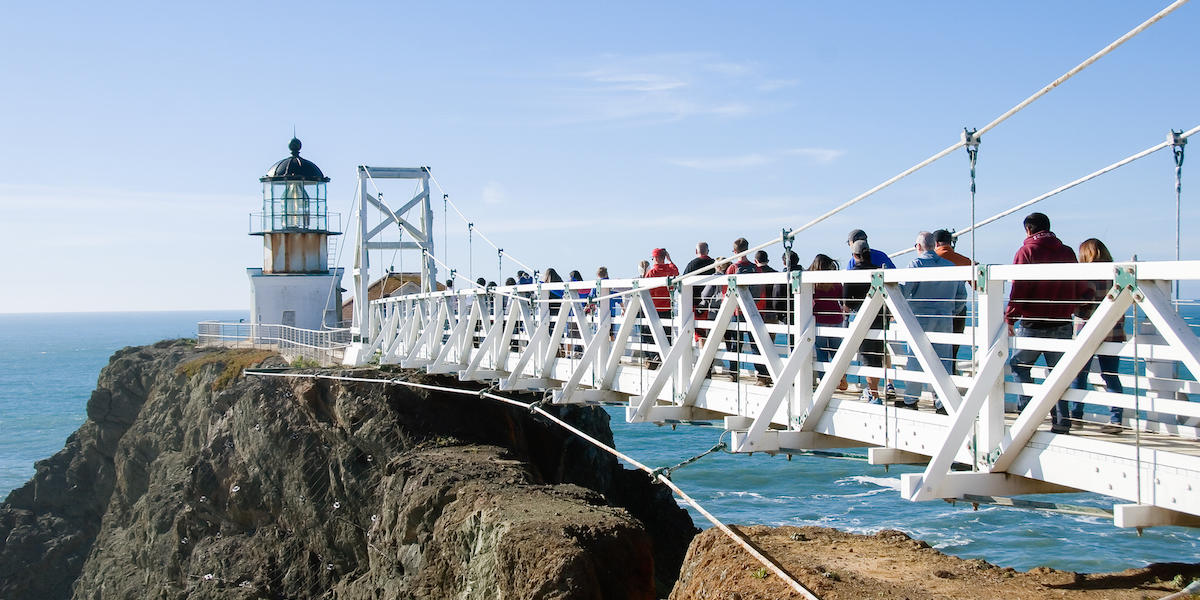 The original lighthouse, built in 1855 high upon a cliff face of the Marin Headlands, was buried in fog and considered ineffective. Therefore it was moved to its current location in 1877. To get there safely a hand-hewn tunnel was constructed through unstable rock. The tunnel and a trail walking along steep drop-offs led keepers out to the lighthouse. After a series of storms eroded away a natural land bridge leading out to the Point Bonita Lighthouse in the late 1930s/early 1940s a suspension bridge was built in 1954.

The bridge underwent various repairs but stood the test of time in harsh wind, rain and salty sea spray conditions until August 2010. At that time the bridge was deemed safe for use by Coast Guard personnel only to attend to the light and fog signal which still guide ships safely through the Golden Gate.

Federal Highways, National Park Service and the U.S. Coast Guard worked together to devise a plan to completely replace the suspension bridge. Care was taken to design a bridge that would replicate the original suspension bridge and maintain the historical character of Point Bonita. Once plans were completed and FLATIRON contractors were chosen to handle this special task, work on removing the original bridge started October 2011.

A sustainable grown African hardwood, “EKKI”, was secured to rebuild the bridge. All supplies and materials were carried through the hand-hewn tunnel making the task challenging.  Photo documentation of this historical work was captured from start to finish by Al Greening and by early April 2012 the new bridge was deemed complete.

With the new bridge finished, the Point Bonita Volunteers quickly regrouped, kicked into action and formed work parties to get the lighthouse ready to be opened to the public. On Friday, April 13, 2012 at 1300 hours the official ribbon cutting ceremony took place once again opening the Point Bonita Bridge and Lighthouse for all to see. On the first day it was open to the public over 1,000 visitors came to see this historic site.

We invite you to come see Point Bonita and learn its rich history. The Point Bonita tunnel is open and allows access to the bridge and lighthouse every Saturday, Sunday and Monday from 12:30–3:30 pm. For more information, please call the Marin Headlands Visitor Center at (415) 331-1540 or visit /visit/park-sites/point-bonita.html.