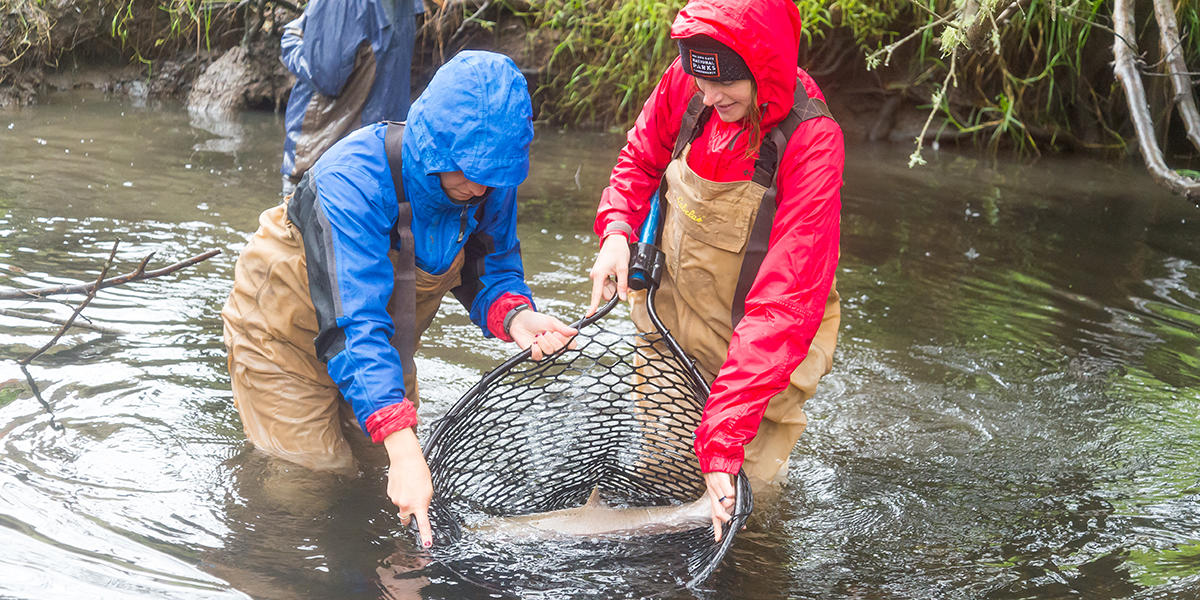 On a rainy day in December, seven adult coho salmon (Oncorhynchus kisutch) were picked up at the Warm Springs Hatchery at Lake Sonoma, where they'd spent the last year and a half, and transported by truck to Marin County.

The foot-long fish—four males and three females—were then carried in a cooler and released by hand into the rising waters of Redwood Creek.

“The fish instantly disappeared,” wrote National Park Service Fishery Biologist Michael Reichmuth in an update to colleagues. “The next big question was, ‘Would we ever see these fish again?’”

The Redwood Creek Coho Salmon Captive Rearing Project, which began with the harvesting of year-old salmon in August 2014, aims to help the Central California Coast coho, on the endangered species list since 2005, make a comeback.

To help bring this fish back from the brink of extirpation (local extinction), biologists are planning four releases of captive-raised fish through the winter of 2018; the December 2015 release was the first.

The salmon will be returned to Redwood Creek during spawning season, which lasts from mid-November to February, but only after ultrasounds demonstrate they are biologically ready to reproduce.

During the freshwater phase of their lives, coho face myriad challenges, from dams to droughts. But the biggest losses, up to 90% of the population, happen when the salmon swim out to sea—due to a combination of predation and poor ocean conditions.

“Then you have things like El Niño warming waters and changing nutrients,” adds Darren Fong, an Aquatic Ecologist for the Golden Gate National Recreation Area. “It’s those kinds of things that throw a real monkey wrench into coho survival.”

By temporarily raising wild salmon in captivity and then releasing them to spawn, the project attempts to circumvent this mortality rate—while minimizing interference with Mother Nature’s processes.

“One criticism of hatcheries is that humans artificially select mating partners for the fish,” Fong says. “This way [the release into streams], they can choose who to spawn with.”

But there’s another challenge to producing a healthy and sustainable coho population. Because so few salmon have been counted at Redwood Creek, biologists were also concerned about the effects of inbreeding.

“One of the strategies was to take fish from adjacent watersheds to help diversify the gene pool,” Fong explains.

In the case of Redwood Creek, this meant adding females from nearby Olema Creek to the hatchery brood. The Olema fish are better primed than their cousins (in places such as Mendocino County) to face local environmental challenges, like the low stream flow of creeks.

Before their release, the hatchery fish were tagged with colored zip ties—pink for the females and green for the males. Since then, at least one of the hatchery salmon was spotted spawning at Muir Woods, near serene Cathedral Grove.

Researchers hope to garner much more information about this first batch of fish this summer, when their progeny will have emerged from the gravel. Crews will canvass the entire watershed, taking “fin clips” of fish and sending them to a National Marine Fisheries Service researcher in Santa Cruz.

Comparing these clips with genetic data collected at the hatchery will determine not only how many fish are the descendants of the hatchery brood, but also which individuals were the most successful at spawning.

The next batch of coho is scheduled for release in December 2016. This group, having had more time to mature, is predicted to be much larger—more than 100 fish.

You can follow the fate of the hatchery fish and the Redwood Creek project at sfnps.org/coho/blog_posts.