When Day Fades Away, Bats Come Out to Play 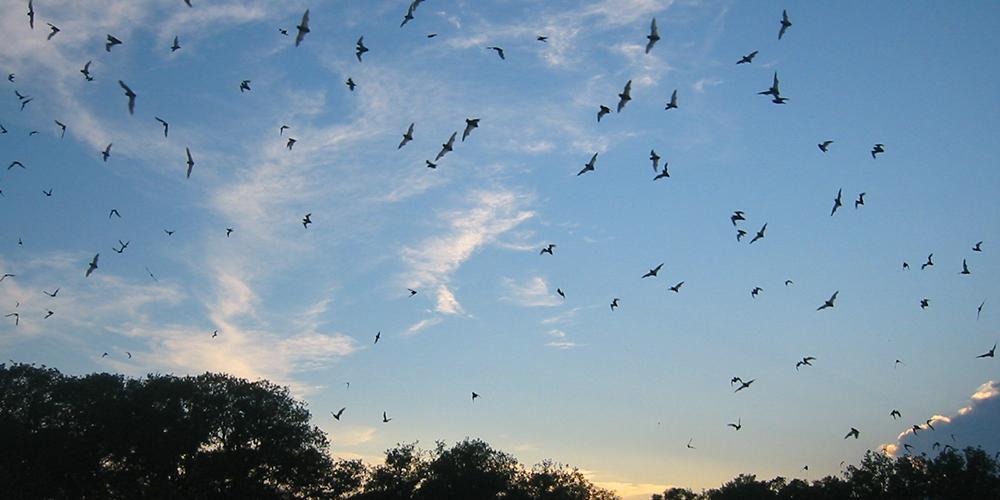 Little brown bats (Myotis lucifugus, which in Greek means “mouse ear” and “light fleeing”) inhabit Canada, Mexico, and the United States. They prefer forested areas, but can easily adapt to tall shrub and urban environments. They are extremely temperature tolerant and can survive cold 40 degree nights and hot 120 degree days.

Bats are largely nocturnal, meaning they are most active after sundown. Specifically, little brown bats emerge from their dark roosts two-to-three hours after dusk to feed. After feeding, they return to their roosts to sleep out the rest of the night and day hanging upside down.

Seem a bit mysterious and spooky to you? Well, these little critters use the dark of night to remain undetectable to even the most vigilant prey. They don't use their eyes while hunting, but instead use their voices and ears. They send out high-pitched sound waves into the night, which bounce off of prey's bodies and return to the bat's ears, where they register as reverberations. Little brown bats can use this echolocation to zero-in on prey with frightening accuracy.

Fearing that you might be the next victim to lose a pint of blood to a little brown bat? Think again. Little brown bats are insectivores, meaning that they feed solely on bugs. In fact, little brown bats serve as great mosquito exterminators. Though they weigh less than an ounce as adults, they consume half of their body weight in insects every night! That’s surely a great service for humans sensitive to mosquito bites!

From November to March, little brown bats enter a state of hibernation. They find large, dark spaces in which to congregate and fall asleep. In nature, these dark spaces are often caves or log piles, but in the urban world, bats can become pests when they decide to roost and hibernate in buildings.
Little brown bats mate in spring, but females can delay pregnancy for up to seven months. Furthermore, males can be extremely sneaky; they will mate with sleeping females if the opportunity presents itself! Females give birth to one pup per year, and then care for it until the young one can feed and fly on its own. This nursing period lasts only four weeks.

Young bats experience a large drop in weight after weaning as they perfect their insect-snatching craft, but those that survive that lean period live for an average of 6–7 years. One little brown bat caught in Ontario, Canada, however, was estimated to be over 30 years old!

Next time you’re taking a twilight stroll around the neighborhood, or finishing up an early evening hike in the park, look up to the sky and see if you can spot a little brown bat on the hunt. Take time to appreciate this flying mammal’s unique adaptations and important ecological niche as an insect predator of the night. Still curious? Visit Animal Diversity Web's page on the little brown bat to learn more.