Will You Have the “Best Day” on Hawk Hill? 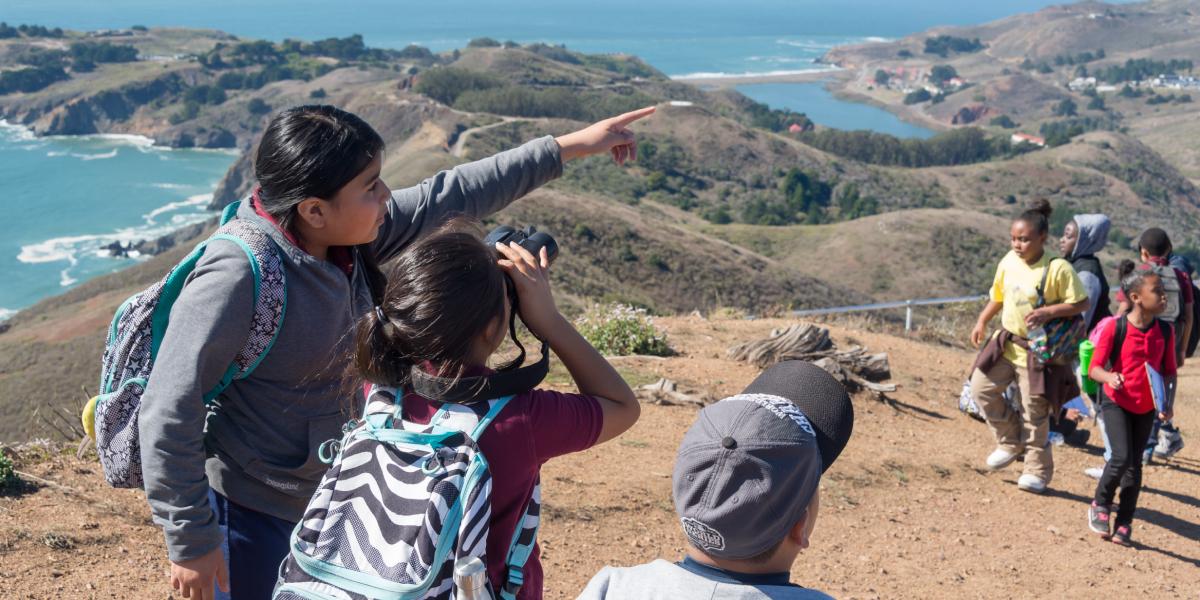 Wait. Maybe it is a bird.

Indeed, a dark speck in the sky may be hard to distinguish from a faraway aircraft or even—these days—an errant drone. But distinguishing birds—specifically, birds of prey—is exactly what the Golden Gate Raptor Observatory’s team of hawkwatchers will be attempting from the summit of Hawk Hill in the coming weeks.

From mid-August to December, the GGRO’s 300 volunteers will be fervently counting and banding raptors as these birds of prey hurtle through the skies over the Golden Gate on migration.

Thanks to GGRO’s docent program, which brings people to the top of Hawk Hill for Hawk Talks and Banding Demonstrations, you can get a taste for the skills required to pick out the soaring of a Red-tailed Hawk from the pointy-winged flight of a falcon that seemed to disappear from the horizon as quickly as it whipped into view.

The Hawk Talk starts at noon on Saturdays and Sundays in September and October, followed by a Banding Demonstration around 1 pm (your chance to see a wild hawk in hand before it is released, adorned with a brand-new leg band—hawks willing!).

Hawk Talks are designed to help you learn not only when that speck in the sky is a raptor, but just what kind of raptor it might be—based on the shape of its silhouette, the style of its flight, and any patterns on its body (called field marks) that are visible through binoculars or a spotting scope. Hawk Talks also explain why the Marin Headlands act as a “hawk funnel” and how the GGRO has taken advantage of that funnel to conduct 30 years of research on the dynamics of West Coast raptor migration.

“It’s cool to integrate this group of people who wouldn’t even consider trying to ID bird, to get them identifying raptors,” says Elan Carnahan, one of GGRO’s outreach interns who will assist in delivering docent programs this season.

“And the opportunity to interact with so many people from different ages, places, and backgrounds is exciting for an educator,” adds Natasha Lekach, another outreach intern.

The timing of Hawk Talks corresponds to the most intense period of raptor migration in the Marin Headlands. For this reason, it’s an excellent time to visit the Hill: you’re likely to see real examples of the hawks you learn about gliding in high concentrations overhead.

Curious when the best day would be to join volunteer hawkwatchers for prime raptor viewing? So are those same volunteers, whose quest for the elusive “best day” is ongoing. What counts as best, however, is up for interpretation.

For Allen Fish, GGRO’s long-time director, there’s no question that the best day is synonymous with seeing the most species. Of the 19 species that commonly occur in the Headlands, as many as 17 might make an appearance on that single, diverse day, which tends to fall around October 15.

“That much raptor diversity overhead in one day is really cool—anything above 13 species and we all get really excited,” Allen says.

Others, however, find diversity less awe-inspiring than sheer volume, and the GGRO also keeps tabs on the best day each year for total number of hawks viewed on the Hill, a peak that usually occurs in the last week of September or first week of October.

Peak numbers are a testament to Hawk Hill’s status as the premier West Coast site for viewing raptor migration. On October 1, 2014, hawkwatchers tallied 142 raptors per hour (rph—the average number of raptors counted per hour of monitoring), or roughly one raptor every 30 seconds! Despite the government shutdown, 2013’s team counted 161 rph on October 9. And on September 27, 2012, thanks to a star showing by 295 Broad-winged Hawks, the peak day offered a whopping 205 rph.

Will you be able to identify them?

Raptor ID books are for sale at the Marin Headlands Visitor Center. Public transportation is available via the free Marin Headlands shuttle to the roundabout just below Hawk Hill, about a ¾ mile walk to the summit. The GGRO recommends arriving by 11:30 for Hawk Talks if you intend to park at Hawk Hill. For more information on getting to the Hill, click here.