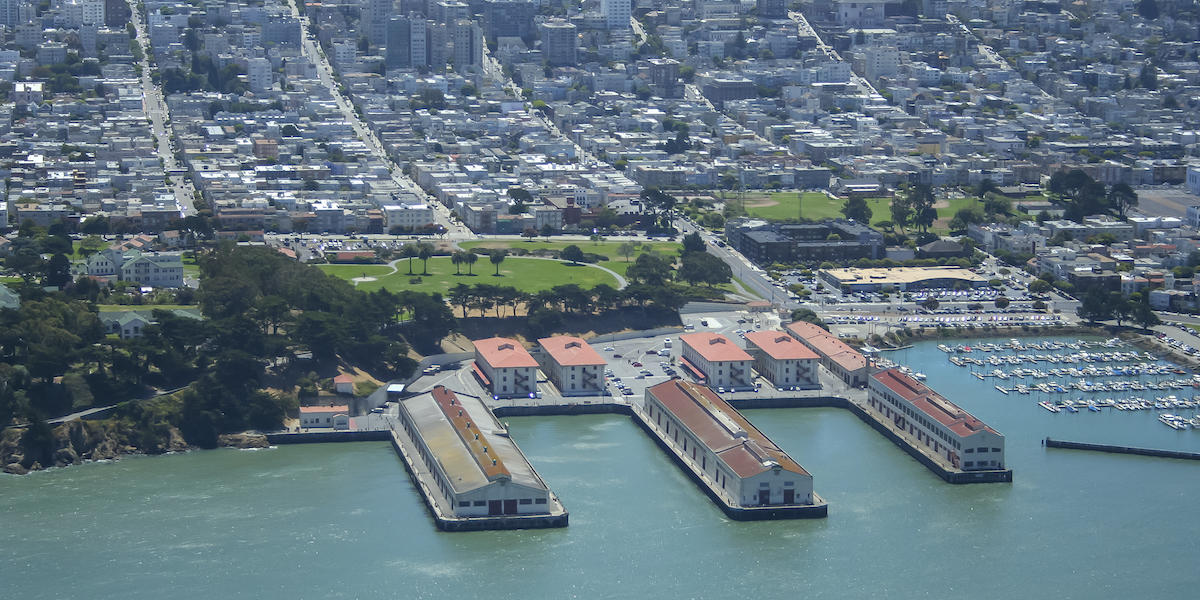 Fort Mason was the principle Pacific Port of Embarkation for soldiers and sailors as well as for supplies traveling to World War II war zones. Frank Schmidt/National Park Service

Writer's note: Modern day San Francisco exists on indigenous land of the Ramaytush Ohlone community. I thank them for stewarding the land we now call home for centuries before colonization.

Woven into the rainbow tapestry of San Francisco’s queer community as we know it today are threads of history tied to the effects of U.S. military occupation of the region. Between bases and weapons refineries, the military industrial complex was a huge boon for the local economy, driving tens of millions from across America to an already thriving Bay Area. With the new population from a broad cross-section of the country came a new generation of LGBT-identifying folk establishing new roots in the more inclusive, liberal bastion of San Francisco.

“[World War II] properly marks the beginning of the nation’s, and San Francisco’s, modern gay history,” wrote historian John D’Emilio in his book “Making Trouble: Essays on Gay History, Politics, and the University.” “The war uprooted tens of millions of American men and women, plucking them from families, small towns, and ethnic neighborhoods of large cities and deposited them in a variety of sex-segregated, non-familial environments.”

The Bay Area has always been a key point of coastal defense and bases were all over the region, some of which you might recognize as beloved open spaces today: The Presidio, Fort Miley, and Fort Mason. Other Bay Area military bases were Hamilton Field and Moffett Field.

Fort Mason, in particular, was the principle Pacific Port of Embarkation for soldiers and sailors as well as for supplies traveling to WWII war zones in the Pacific Ocean—Guam, the Midway, the Philippines, and Solomon Island. According to the National Park Service, “During the 45 months of war, 1,647,174 passengers and 23,589,472 measured tons moved under the San Francisco Port of Embarkation into the Pacific. This total represents two-thirds of all troops sent into the Pacific and more than one-half of all Army cargo moved through West Coast ports.”

For some of those who lived to fight another day and returned home from war, San Francisco was remembered as a friendly port and safe harbor for those not fitting into society’s ideals of heteronormativity. Until 1973, homosexuality was still diagnosed as a mental health disorder when the American Psychiatric Association removed it from the second edition of its Diagnostic Statistical Manual (also known as DSM 2). Some of the millions who served decided to stay and establish a new life in the city for fear of returning home due to persecution from family members and their communities. By 1946, the Bureau of the Census estimated there were 130,000 veterans living in the San Francisco area at that time. “About one third of all veterans were newcomers to the San Francisco locality since they entered the service.”

“By uprooting an entire generation, the war helped channel urban gay life into a particular path of growth—away from stable private networks and toward public commercial establishments,” wrote local historian Allan Bérubé, in his book “Coming Out Under Fire: The History of Gay Men and Women in World War II.” Bérubé is also a founding member of the GLBT Historical Society in SF’s iconic Castro District.

For those still serving in the military, living as—or being deemed as—a homosexual earned you a discharge, more commonly known as a “blue ticket” or “blue discharge.” These discharges were named after the color of paper on which they were issued. It was neither an honorable discharge nor a dishonorable discharge, and the basis for warranting such an action ranged from protracted absence without leave and poor performance to “undesirable traits of character,” according to writer Bradford Adams in his book, “With Malice Toward None: Revisiting the Historical and Legal Basis for Excluding Veterans from ‘Veteran Services.’”

The Armed Forces went a step further to discriminate and target LBGT folks serving. The May Act authorized the military to survey personnel and recreational areas near bases and shut down places that catered to prostitutes and vice (any behavior deemed wicked by society). Service members were easy to spot, the Army and Navy required them to wear their uniform off base.

“The presence of military police on the streets and in bars also had an impact on the lives of locals in that MPs established a threatening presence inside bars and taverns. They also communicated with local police and state liquor agents, instigating raids, or other kinds of harassment that might have otherwise been avoided,” wrote UCSF professor Nan Alamilla Boyd in her book “Wide-Open Town.”

Out of oppression and police violence came a sense of community and an unrelenting resistance that is still fighting against injustice today.

“Ironically, the increasing harassment of gay men and lesbians in the armed services, including the use of the notorious, undesirable ‘blue’ discharges, helped to build a sense of community among its victims,” Berube wrote in “Coming Out Under Fire.”

More than half a century later, the miltary bases are now national park sites welcoming millions of visitors, discriminatory military policies still exist (like the current ban on transgender folks serving), and SF’s queer community continues to embody that spirit of resistance. But we still have a long way to go as a society and as a community to make our queer spaces—and natural ones—safe from prejudice, discrimination, and the lingering grasp of centuries of oppression. And the LGBT community must look inward at our intersectional queer identities in today’s world and how we inadvertently or overty perpetuate racism, misogyny, classism, ableism, sizism, xenophobia, white supremacy, and transphobia.

Let’s turn to the past for wisdom on how we can shape tomorrow and carry forward SF’s signature ethos of radical inclusion for generations to come.