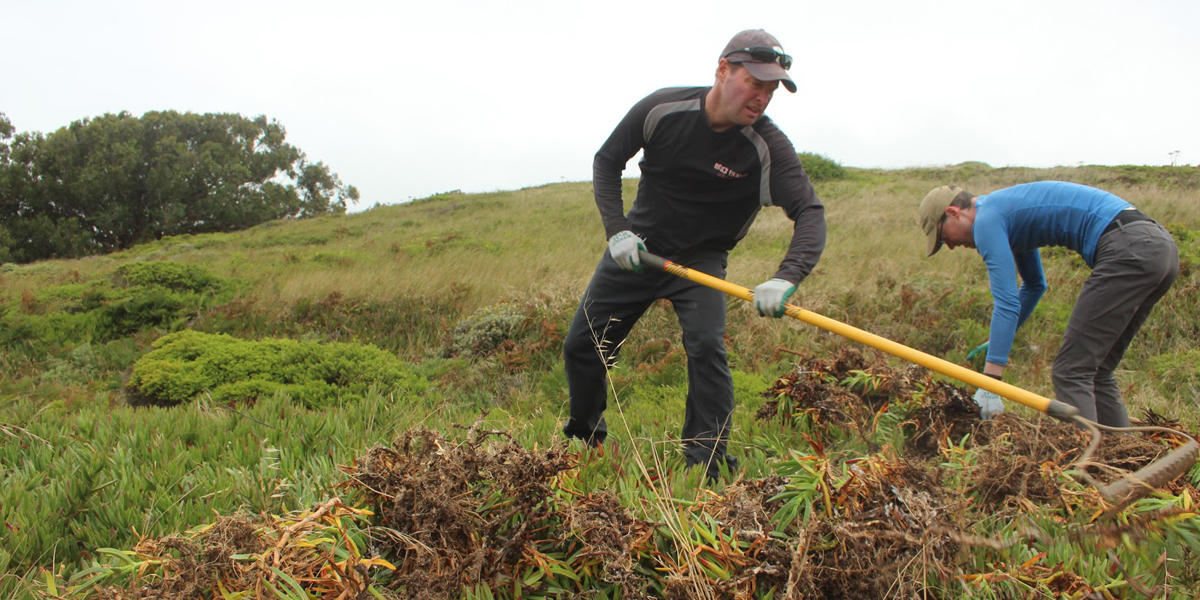 Ice plant, also called hottentot fig, sour fig, cape fig, and sea fig, is a succulent that hails from South Africa. As its nicknames imply, after flowering, the plant produces a fig-like fruit that is commonly used for jams in South Africa. The juice of the leaves is said to help with digestive issues, and as a topical antiseptic for infections.

Ice plant was brought to the California coast in the early 1900s, originally to stabilize soil near railroads, and later in dune habitats. The struggle to control ice plant seems to be never-ending. So why do we keep doing it? While the hearty plant is a beautiful and vivacious ground cover, it tends to overrun California flora in several ways:

Dune structure- Dunes have a naturally fluid structure; the sand is constantly shifting due to the coastal winds. Ice plant’s talent for erosion control is actually hindering this natural movement in which many California plants thrive.

Soil salinity- It increases soil salinity, which can affect new species years after the succulent has been removed.

Overcrowding- Because it grows so quickly (up to 5 feet a year) and in dense and thick layers, capturing all the sunlight, water, and nutrients, ice plant often takes over huge swaths of sandy areas. This pushes species, such as beach grasses used by seabirds, out and makes room for other animals, like some rat species.

Biodiversity in California coastal ecosystems, including species such as seaside daisies, sage, lupine, and the animals that rely on them, is greatly reduced with the spread of the hottentot fig. But what does any of this have to do with trails?

What would happen if we let ice plant grow wild and free in the GGNRA? The most obvious answer—many trails would be lost under a spongy succulent carpet. A more subtle effect has to do with trail structure. Ideally, a trail is solid and even, with reliable drains for those wet winter storms. When ice plant takes over a trail, removing it can loosen the soil and destroy the crowning, grade, or any other subtle angle of the trail. This makes puddles form more easily, expedites erosion, and generally requires more maintenance of that section of trail.

So while we may never truly have an ice plant-free California coast, let’s enjoy getting our hands dirty trying. After all, rolling up a carpet of the stuff can be quite satisfying!