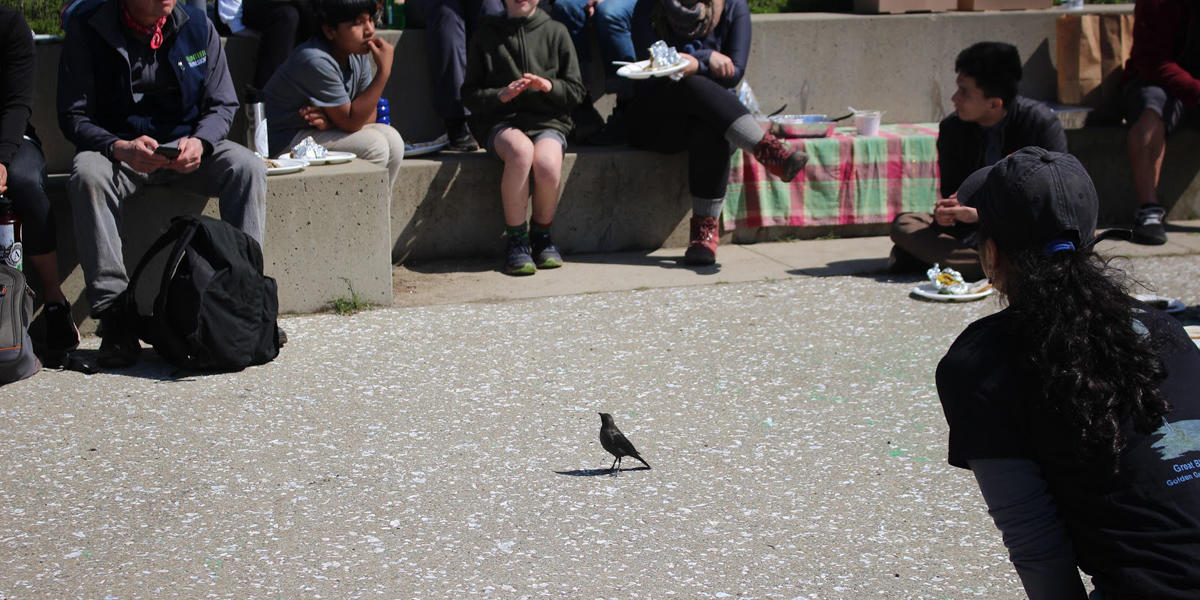 If there’s anything I’ve learned about habitat restoration and conservation over the past few months, it’s that it can be a very complex process. In the grand scheme of things, we’re all looking to restore and preserve our national parks for the enjoyment of future generations as well as all the flora and fauna that consider these spaces their homes. The connections between these plants and animals can be more subtle than we would typically imagine.

As a part of a team that focuses mainly on vegetation management, we tend to see restoration through the lens of what is best for the plants. A lot of our work involves removing introduced plant species to make room for other plants that have historically thrived in our parks for hundreds of years before the landscape was dramatically impacted. Some of these indigenous plants are now rare and endangered, and we tend to set goals with their re-introduction/establishment in mind.

The work we do can have an interesting influence on the other members of the ecosystem. I began to notice the potential of this influence first hand a few months ago, when the field just outside the Natural Resources Office in the Presidio started to undergo a dramatic transformation. Before the start of this transformation, the grasses were tall enough to conceal a coyote’s presence, and it was common to see them roaming the field in search of gophers and other burrowing rodents. However, after the majority of grasses were removed to make room for plants like yarrow and beach strawberries, I noticed the coyotes started visiting less and less. The start of the coyote pupping season probably had some sort of impact on this shift as well, but it wasn’t until the return of the taller grasses that I started seeing the coyotes casually strolling past the office to hunt once again.

My team and I witnessed a similar connection between plants and wildlife while working to remove some introduced species over at Lands End. For months we had been working to control the spread of Fumaria and annual grasses within the park, and we were making pretty good progress too. One Saturday, after clearing out an impressive patch of Fumaria with some volunteers, we witnessed a red-tailed hawk swoop down right next to our group where the Fumaria had just been removed. It landed for a quick second, gave us all a piercing glare, and flew off with a bit of lunch between its talons. Just a few weeks later, we were back at Lands End removing grasses with some students right on the edge of one of the cypress groves. We were nearing the end of the program and looking back at all the hard work we had done when, again, a red-tailed hawk swooped down right next to us and grabbed a snack for itself before returning to its perch above our heads. After witnessing this second diving event so close to the area we had just worked to restore, I began to think that the work we were doing was somehow benefiting the family of hawks in the area. With all the vegetation being removed, some of the smaller mammals seemed to have become further exposed to predation by the hawks, and I had a feeling that the hawks were noticing and appreciating our hard work from their homes among the treetops.

I only recently opened my eyes to a third and final interesting interaction between flora and fauna. With bird nesting season from March through August, some of the Presidio Trust staff had begun to offer training in identifying birds and their nesting behaviors. As someone who has always been interested in identification and animal behavior, this opportunity seemed right up my alley, but I wasn’t initially thinking of how relevant this could be to the work my team and I were doing on a weekly basis. What I learned (and am still learning) from these trainings is that many birds have different nesting behaviors and preferences in terms of where they like to build their nests. Because our restoration work sometimes involves removing introduced species from an area, it’s important for us as land managers to recognize the capacity for some of these introduced species to serve as suitable habitat for birds to nest in. When monitoring an area for the potential existence of a nest, I’ve learned it’s critical to pay attention to subtleties such as presence of food/nesting material within a bird’s beak, repeated visitation to a specific area within a shrub or tree, and even calls to alert a member of the pair that the other is leaving or returning to the nest. These little signals and many more are all used in conjunction to determine if a nest is located within a certain area. Recently at Lands End, our team has had a few experiences with discovering nests after removing Fumaria and other introduced species from an area. Although we’ve left these areas alone after spotting the nests, I see why it’s important to dedicate time to monitoring these areas for possible nests.

Already, I’ve begun to notice the potential for our work to influence other members of the ecosystem. I’ll continue to make personal observations on relationships between vegetation management and wildlife, and I hope that we can all be more aware of how deeply connected these two restoration aspects can be.