When is Migration, When is Nesting?

The autumn raptor migration at the Golden Gate runs August through December. The spring migration is late February through May. So how is it that my neighborhood Bay Area Redtails are nesting in April? Shouldn’t they be migrating north? How exactly does the hawk breeding season fit between May and August?

These are great questions—that’s a popular thing to say, but I have a good reason for decreeing greatness here. This is all about the science of phenology. Phenology is the study of the dates and timing of ecological events. Phenology is grounded in human curiosity and survival. Imagine for a second living thousands of years ago at the edge of San Francisco Bay in the winter. She who accurately knew the dates when Snow Geese returned to the Bay was a critical provider for her people.

One of the earliest forms of scientist, phenologists recorded dates of events, tracking change from year to year, so it is no surprise that our intuitions today still try to make sense of dates in the lives of other species. But it’s not always about species. One of the earliest known records of phenology comes from the Kino Mountains in central Japan, where priests living on Lake Suwa would note the date that the lake’s surface would freeze completely, creating a buckled ridge of ice across the lake. Beginning in 1443, the annual date was written down, and it is still noted today—a 1223-year ecological record! For a student of global change, such as climate change, that record is pure gold today.

What, you wonder, does this have to do with the hawk nesting and migration near the Golden Gate? We too are tracking the timing of raptor migrations past the Golden Gate each year. For each of the nineteen species of hawk, eagle, falcon, osprey, vulture, and harrier, we study the migratory peak dates annually, but also the first and final migration dates where possible. And that’s the first answer to the question above—why are some Redtails nesting in April while other Redtails are still migrating north? Not only does each species of bird have a different migration (or non-migration) strategy, but sometimes within a species, there are multiple migration strategies. Redtails are one of those.

If you have a bird field guide, pull it out and flip to the Red-tailed Hawk page. Look at the range map. What do you see? Redtails are everywhere. From the Pacific to the Atlantic. From southern Canada into Mexico. Now take note of the breeding range of Redtails versus the winter range. Redtails have a huge choice of potential places to live across the continent. You’d think this might make for Redtail chaos, but—as near as we can tell—Redtail movement patterns are pretty orderly.

For example, at GGRO, we know from an analysis conducted by Dr. Joshua Hull using GGRO banding and hawk count data, combined with DNA testing, that the early season (September) migrating Redtails are mostly California nesters, while the late season Redtails (November) have nested in farther northern and eastern locations such as Canada and the Great Basin. This coincides with a hypothesis of bird migration called leapfrog migration—the farther north you nest, the farther south you winter. It’s not a perfect model for explaining all Redtail migration but it’s surprisingly applicable. You nest in Alberta, you winter in Abilene. You nest in Oakland, you winter, most likely, in Oakland.

So those short-distance migrants, they don’t fly on average as far to their wintering grounds as the late-season Redtails do. And many of our Bay Area nesting Red-tailed Hawks (as well as other raptor species like Red-shouldered and Cooper’s Hawks) seem perfectly content to stay year-round in the Bay Area often right near their nesting territory. The rule of thumb here is—don’t migrate unless you have to. Prey-wise, the Bay Area is a darn good place for a Redtail to nest, and the only limiting factor is…nest sites. For Redtails, this means a big, loose-canopied tree with minimum wind and maximum view. Or a cliff. Or on occasion, a building.

All of which brings us to this: The Bay Area is high rent district for Redtails and humans alike, and the hawks likely stay close to their nest tree throughout the year to make sure they don’t lose their foothold on the territory.

Although they likely stick close to their nest tree through the year, a pair of Red-tailed Hawks in the Bay Area doesn’t begin building up the nest and actively breeding likely till mid-February. Nest building in winter?! In central California, February is pretty much the start of spring. And by late March, while the female hawk is sitting on a clutch of eggs in her wind-swaying Sycamore tree, she may very well look up and see another Red-tailed Hawk overhead flying a northward line, Alberta-bound. So there you go: one hawk nesting while another is on a highway heading north.

Some local raptor dates have been well documented by years of study in the Presidio of San Francisco conducted by Kim Meyer. Attempting to document all the raptor nests in this unusually urban national park, Meyer found that nesting Redtails had first eggs anytime from early to late March. Why so early? Could be a dozen reasons—it could be related to prey, habitat, temperatures, or weather patterns. One important hypothesis says that birds nest at the right time so that when their chicks fledge, the newly-flying fledgers will run into the maximum amount of prey or seeds or nectar, etc. (But how do the parent hawks judge potential prey numbers for two to three months ahead? We don’t know!) Many central coast Redtails have another incentive to nest earlier: to beat Great Horned Owls to the nest site.

Great Horns, actually owls, don’t make nests in the classic carry-sticks-to-a-tree style. They find old hawk nests. Sometimes crevices, or crotches in trees that will allow their eggs not to roll. And locally, Great Horns are perfectly happy to use last year’s Redtail nests, but the owls have to start early. Years ago, Kim found a Great Horned Owl that had laid her first egg on January 4th. January 4th! That’s amazing! That owl pair must have been well into reproductive mode in early December.

This nest-skirmishing can create a little tension between hawks and owls in the winter months. Presidio biologists documented this tension using a nest camera last winter when a Red-tailed Hawk struck a sitting Great Horned Owl at least three times from February 2nd to 7th, finally chasing the owl away and creating a media stir on YouTube.

THE SPAN OF RAPTOR BREEDING DATES

So, that’s the Red-tailed Hawk story—why local hawks are nesting as others of the same species are migrating by. But what about other species? When do they nest? Kim Meyer also documented Red-shouldered and Cooper’s hawk nests. Redshoulders were on eggs from late February through May, while Cooper’s started about a month later, being on eggs from late March also through May.

The Presidio dates parallel the timing of Berkeley Cooper’s Hawks, studied by Ralph Pericoli from 2003 to 2011, where hawks were incubating eggs mostly during April. These correspond with first fledging dates from mid-June to early July, a time of great songbird fledging as well, songbirds being a primary food source for Cooper’s Hawks. But was that timing planned or just coincidence?

On the early side, we have Great Horned Owls nesting in San Francisco in December, but what is the late date for Bay Area raptor nests? The latest I have ever heard of is for an unusual California coastal raptor, the White-tailed Kite. These kites are very mouse-centered in their hunting, and as local mouse-numbers make an upswing, White-tailed Kites can move into the area to exploit the food available. This almost-nomadic behavior means that they can nest not just once, but even two times a year (if the mouse index is high), and they can do it quickly. Kites can be on eggs in February, more likely March, but nobody was ready for what birder Michael Mammoser found on October 10th, 1999 along Coyote Creek in Santa Clara County. Mike found a kite chick still in a nest, not yet fledged.

So, Great Horned Owls are nesting in December, White-tailed Kites in October—maybe the best question is: when are Bay Area raptors NOT nesting? November? Although it may be tempting to make that conclusion, the bulk of raptor nesting in our region seems to be concentrated into February through August, still a long seven months.

For certain kinds of human activities, such as tree-trimming, rock-climbing, drone-flying, and wildlife photography, the nesting phenology of raptors is a very important thing to track. And ultimately, land managers, planners, and biologists will all need to have a keener understanding of the long-term effects of climate change on raptor phenology as well. Urban areas themselves are known to trap heat, and thereby create a kind of ecological experiment for what climate change may hold in store. It’s pretty amazing how far tracking raptors can take you, well beyond raptors. 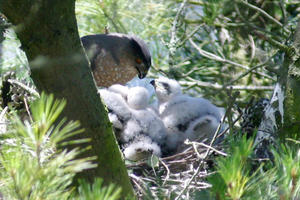