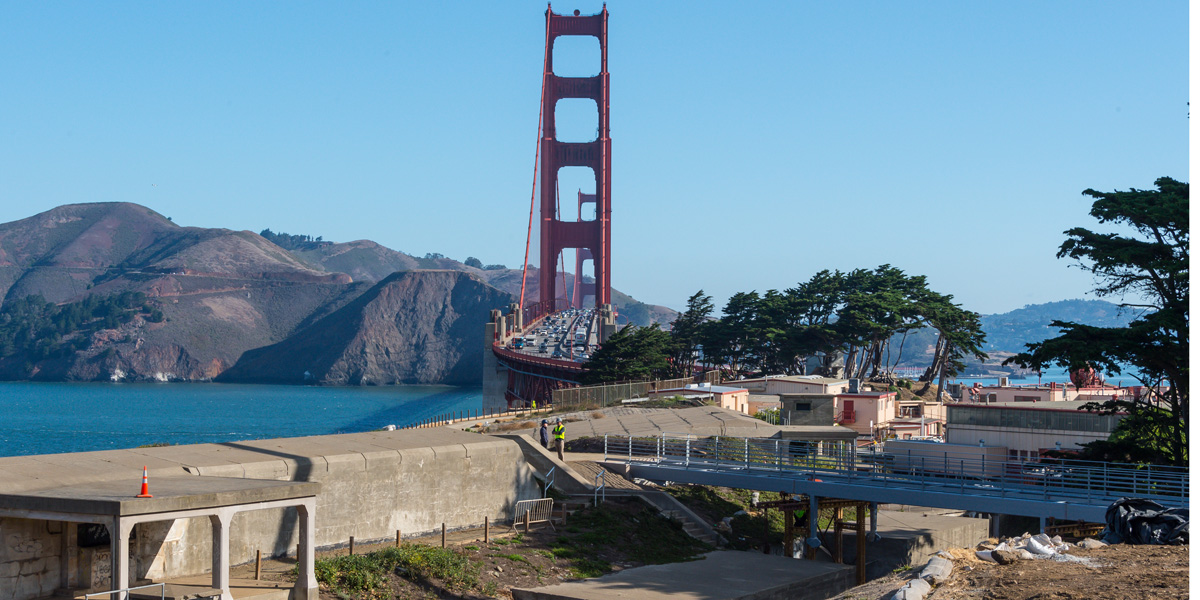 Previously, cyclists coming off the span had to loop through the Bridge Plaza in order to continue their southbound journey to Merchant Road and onward down the flank of the Presidio. But this new ADA accessible feature allows visitors to connect directly to the Coastal Trail, while taking them over the Covered Way and providing them with fresh perspectives on Battery Cranston and Battery Marcus Miller.

Work on this trail included safety fencing on the bridge, improved connections to help pedestrians and bicyclists access the new trail and parking lot, and fencing to protect newly planted vegetation areas. Cyclists can now use this portion of the California Coastal Trail in the Presidio, which is 8.9 miles from the Cliff House to Golden Gate Bridge.

The California Coastal Trail overall is a 1,200-mile route tracing the iconic Pacific coastline from Mexico to Oregon. The Presidio segment connects Baker Beach to the Golden Gate Bridge through the rugged coastal bluffs. At its northern end, the trail continues across the Golden Gate Bridge to the Marin Headlands, and also connects to the Bay Trail, which provides access to the Civil War era Fort Point and Crissy Field. At the southern end, the trail connects to the 25th Avenue Gate to the Presidio and the Richmond District of San Francisco.

This project is part of a comprehensive trail improvement program made possible by generous support from the Evelyn and Walter Haas, Jr. Fund, the Trails Forever Fund a Foot of Trail donors, federal and local agency grants, and members of the Parks Conservancy.

The Parks Conservancy, in partnership with the NPS, and The Presidio Trust, is working to advance our “Trails Forever” initiative to create a world-class trail system and implement landmark Coastal Trail projects throughout the parks, in support of our mission to preserve the Golden Gate National Parks, enhance the experiences of park visitors, and build a community dedicated to conserving the parks for the future.

National Park Service
The National Park Service (NPS) is a federal agency within the U.S. Department of the Interior charged with managing the preservation and public use of America’s most significant natural, scenic, historic, and cultural treasures. The NPS manages the Golden Gate National Recreation Area, as well as 401 other park sites across the U.S. www.nps.gov/goga.

About the Presidio Trust
Responsible for the transformation of the Presidio from an historic Army post into a premier national park that is financially self sustaining, the Presidio Trust is leading the nation’s largest historic preservation project, restoring the park’s buildings and landscapes, and creating innovative programs. For more information, visit www.presidio.gov.