Shortening on Alcatraz by Nelson Saiers 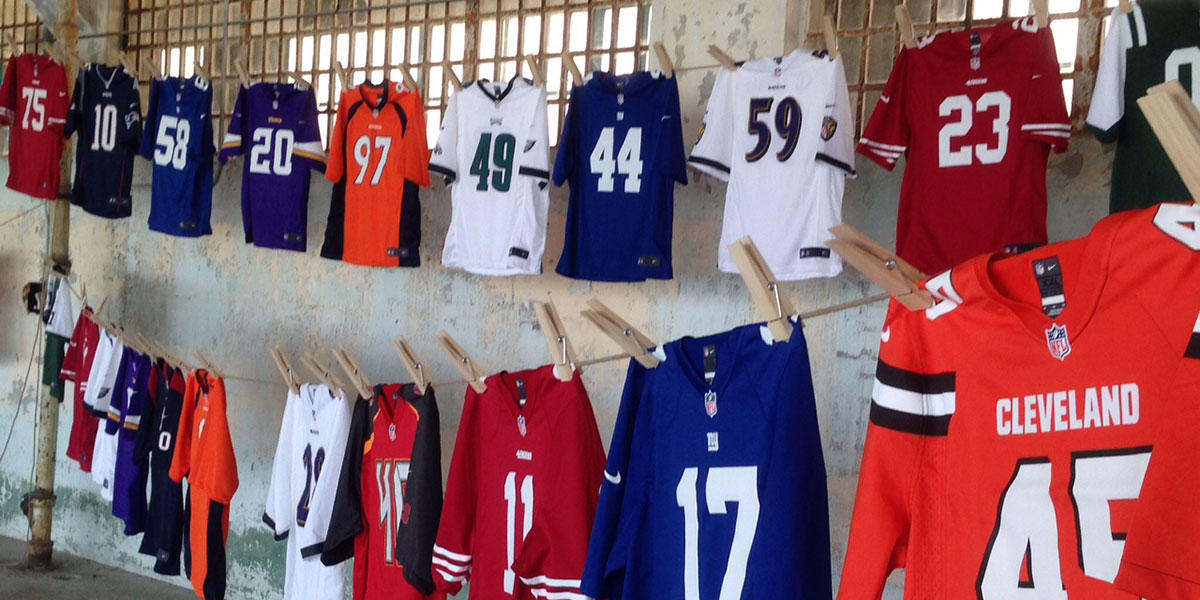 Alcatraz, best known for the historic federal penitentiary and occupation by the Indians of All Tribes, also has a long tradition of welcoming artists to provoke thought about freedom and incarceration. In July 15th 2016 – January 15th 2017, the National Park Service and Nelson Saiers—artist and math Ph.D.— held an installation called “Shortening: Making Irrational Rational.”

Shortening: Making Irrational Rational incorporates properties of the number Pi, prison vernacular and NFL football jerseys to weigh in on the “irrationally” long prison sentences given for minor, nonviolent drug offenses. The installation will show the first 200 digits of PI on 100 NFL football jerseys.

In prison, long sentences are often referred to as “football numbers” because the duration in years resembles numbers on a football jersey. An irrational number is one that never ends nor repeats—like the vast majority of numbers, Pi has this property. The number on the football jerseys that was formed by truncating Pi’s infinitely long string of digits down to its first 200 is rational. Hence, by shortening Pi we have turned it from an irrational to rational number and by analogue by shortening these “irrationally” long prison sentences we will be making them “rational.” The jerseys will be “hung out to dry” (they will be attached to hemp line with clothes pins), which is an appropriate description of society’s unfair treatment of these offenders. The choice of Pi (and its inherent relation to the circle) also points to the cyclical nature of prisons and poverty.

While there have been some recent reforms, the United States (with only 4.5% of the world’s population) incarcerates approximately 22% of the world’s prisoners, leading the world’s incarceration rate, an ironic statistic for the “Land of the Free.” It costs the country over $74 billion—some of which goes to private prisons with quotas. Despite being closed for over 50 years, Alcatraz is the most visible and recognizable prison in the USA, attracting media coverage, filmmakers and tourists. Other elements of the installation are designed to give visitors an opportunity to learn more about this storied venue. The first 200 digits of Pi include the number 85 which is shown on a Chicago Bears’ jersey. It turns out 85 was the prison number of Al Capone who rose to infamy as boss of the famous Chicago Outfit. Native American activism plays an important part of Alcatraz’s storied history and one that Saiers chose to highlight by painting over the derogatory word “Redskin” on Washington football jerseys. This highly visible and striking installation, in the unique context of Alcatraz, will offer the opportunity for park visitors to learn about and discuss the numbers behind the United States’ prison system.

Shortening on Alcatraz is presented through the partnership of the National Park Service, the Headlands Center of the Arts, and the Golden Gate National Parks Conservancy.