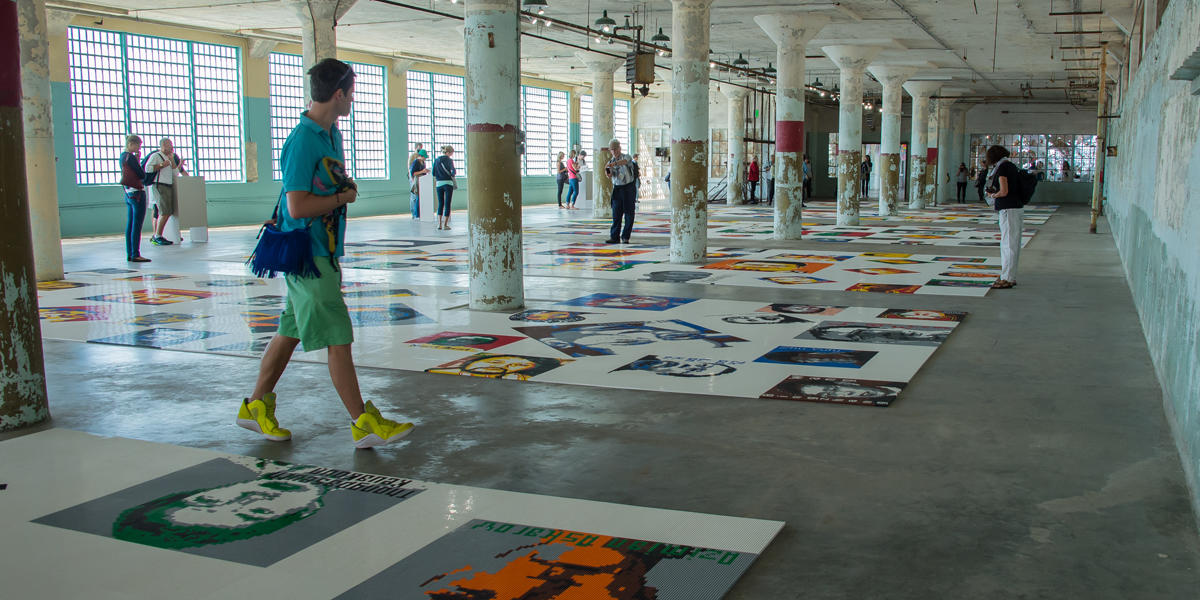 Presented by the FOR-SITE Foundation in partnership with the National Park Service and the Golden Gate National Parks Conservancy, the exhibition explores urgent questions about human rights and freedom of expression—and responds to the potent and layered history of Alcatraz as a place of detainment and protest. @Large will provoke visitors to consider the broader social implications of incarceration and the possibilities of art as an act of conscience.

The large-scale sculpture, sound, and mixed-media works will be installed in the two-story New Industries Building, where “privileged” inmates were permitted to work; the main and psychiatric wards of the Hospital; the A Block cells, the only remaining section of the military prison that was constructed in the early 20th century; and the Dining Hall.

With the exception of the Dining Hall, these spaces are usually off-limits to visitors, but all will be open to the public during the exhibition, which runs through April 26, 2015.

Tickets to Alcatraz, which include admission to the exhibition and the general Alcatraz audio tour, go on sale to the public on June 27 at www.alcatrazcruises.com. Please note that tickets to Alcatraz sell out several weeks in advance. Special Early Bird and Guided Tour tickets are also available at www.parksconservancy.org/visit/art/current-exhibits/ai-weiwei.html.

For Ai, the exhibition is not simply an exploration of social issues or artistic themes; it is rooted in the reality of his life. In spring 2011, Ai was detained by the Chinese government for 81 days on charges of tax evasion. Following his release, he was prohibited from leaving Beijing for one year and is still unable to travel outside of China.

Because Ai is currently unable to visit Alcatraz, he is developing the works in his Beijing studio with the support of exhibition curator and FOR-SITE Executive Director Cheryl Haines and an international team of collaborators from organizations including Amnesty International and Human Rights Watch.

To support the visitor experience on the island, @Large will feature a team of Art Guides positioned at each of the installations, providing additional background about the creation of the works, the history of the locations, and the themes of the exhibition. The Art Guide program will play a vital part in the exhibition’s broader goal to foster a public dialogue about human rights, freedom of expression, and other critical issues explored through Ai’s art and activism—issues that are resonant for individuals and communities internationally.

The program invites established and emerging artists from around the world to create and temporarily display contemporary art in park settings to foster different ways of experiencing and exploring the cultural and natural themes of the Golden Gate National Parks.