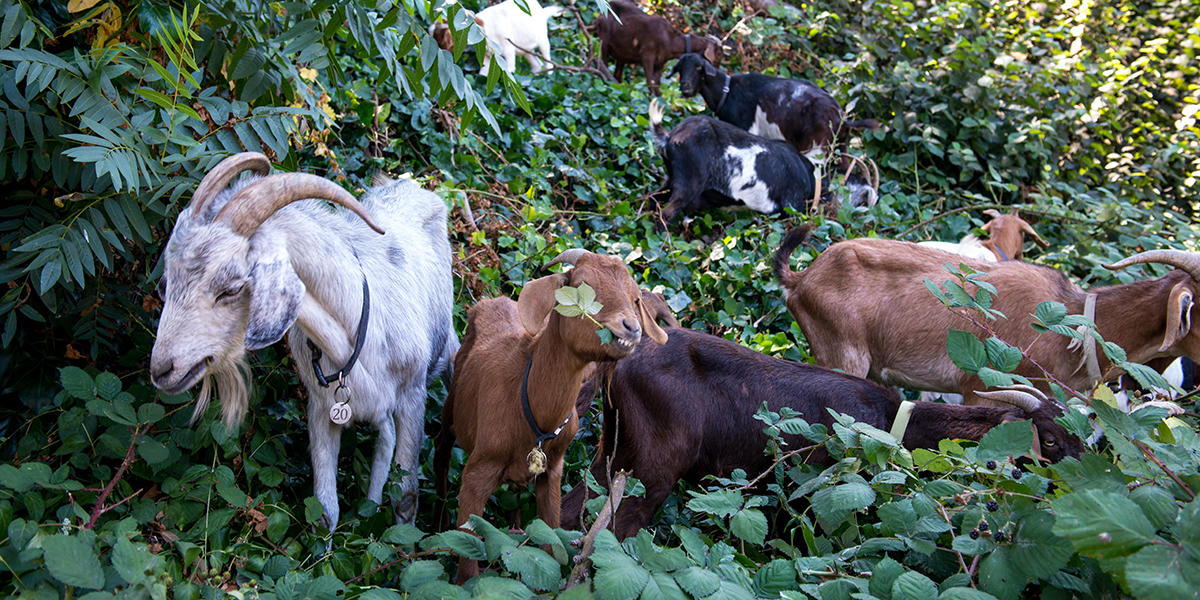 Move over, GoT. The GoaT show might have you bleat—at least when it comes to live entertainment at Fort Mason this August.

Since Aug. 2, about 75 goats—Boers, mixed Boers, Nigerians, alpines, pygmies, and more—have delighted thousands of onlookers as they steadily decimated the overgrown greenery on the bluff behind the General’s Residence and neighboring houses. 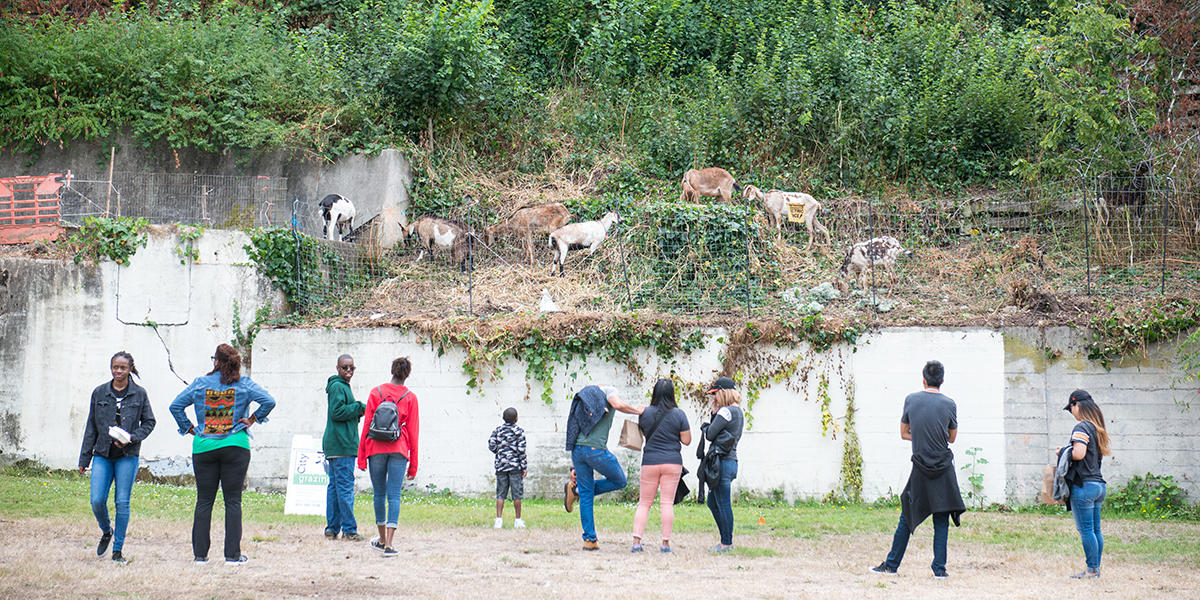 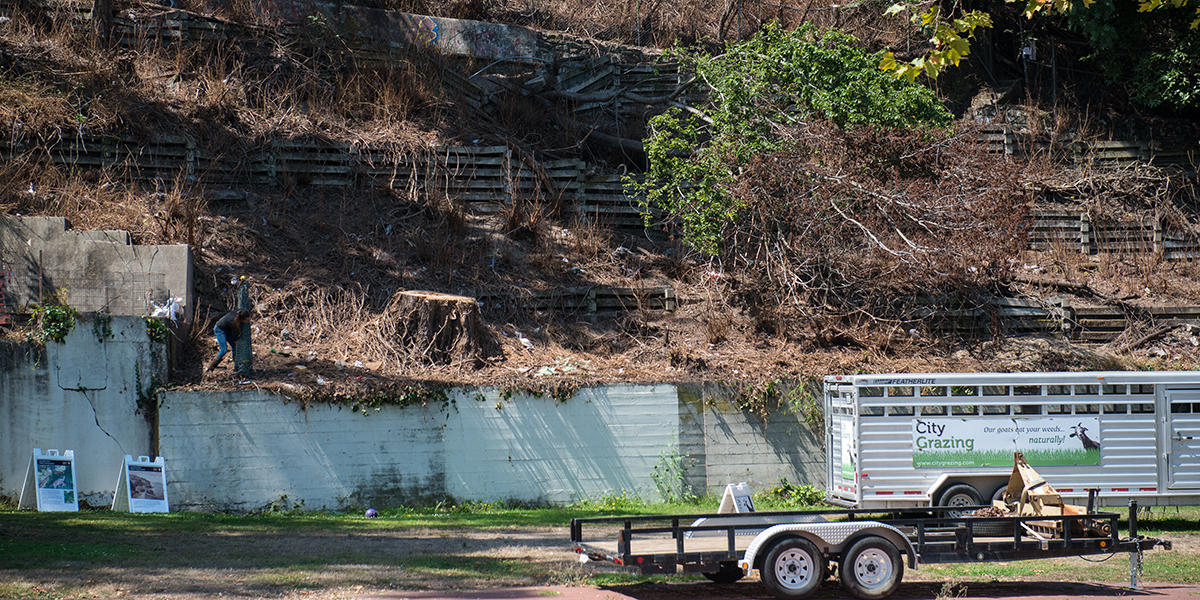 The ravenous ruminants—from City Grazing in San Francisco’s Bayview—munched through the area as part of the East Black Point Project at Fort Mason, a former Army post that is now an amalgamation of residences, visitor destinations, and offices (including those of the National Park Service and Golden Gate National Parks Conservancy).

Around the time of the Panama Pacific International Exposition (1915), a series of pathways overlooking the Bay was constructed down the backyard slope of the officers’ homes (Quarters 2, 3, and 4 on the east side of Franklin Street; see map).

After Fort Mason’s 100-year military period came to a close in the 1970s, the bluff was quickly overrun with Cape ivy, English ivy, blackberry, Siberian elm, and other invasive vegetation. Following the publication of a cultural landscape report for Upper Fort Mason in 2012, the National Park Service made plans to uncover and rehabilitate the network of historic walks, walls, benches, and stairs.

But before the engineers and surveyors can assess the condition of the structures and landscape, the area had to be cleared of its tangled green quilt of flora.

“Why send people in when goats can do even better?” Ochi muses. 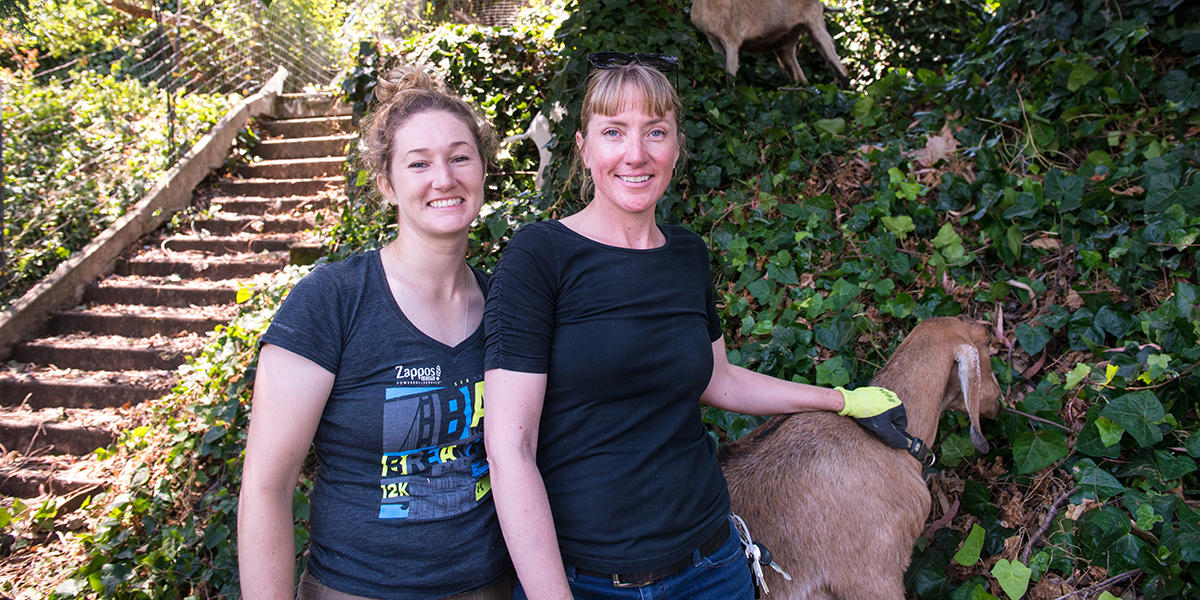 Indeed, the goats—each weighing 25 to 200 pounds—mowed through a month’s worth of meal tickets at what was essentially a well-appointed salad bar. They were protected by mildly electrified agricultural fencing. And they were regularly monitored by volunteers from the Parks Conservancy, National Park Service, and local neighborhood in shifts throughout the day—while a watchman stood sentry during nights.

Aside from the occasional illegal fireworks at nearby Aquatic Park and the grumblings of the resident skunk and raccoon families, the hard-working goats had little to scream about. Even Princess—an old billy goat that earned his name for his high-maintenance disposition—lodged few complaints.

“They seem to be very, very happy,” says Genevieve Church, general manager of City Grazing. “When I was checking the fence line, I saw Sugar and Spice—a brother and sister—literally bouncing along.”

It’s not just the bovids that had a ball. Swarms of visitors strolling or pedaling past the project site—at the foot of Van Ness Avenue—were delighted by the spectacle of the “sweet-natured” goats.

“People really respond to them in such a positive way,” Church observes. “Pretty much every Segway and bicycle tour group that’s gone by has stopped and squealed, ‘Look at the goats!’”

No stranger to working on public lands (they previously cleared the Nike Missile Site in the Marin Headlands of the Golden Gate National Parks), the goats have proven to be quite the charismatic, cloven-hoofed ambassadors. Their “hidden gift,” according to Church, is the goodwill that they consistently generate within the community.

Ochi hopes that the “goatwill” and positive feeling translate into volunteer participation. Managers of the site are looking to establish a stewardship corps for East Black Point, modeled after the Alcatraz Historic Gardens’ example.

In the coming months, these dedicated volunteers will help keep the area clean of refuse and resurgent weeds as staff survey the area, determine rehabilitation priorities, formulate design plans, and then begin work in summer/fall 2018.

As for the doughty, goat-y groundskeeping crew?

They’ll move on to continue cutting vegetation at work sites across the Bay Area. Church says City Grazing—established in 2008—is transitioning to nonprofit status so they can also focus on their community engagement and education work. Among their many activities, the goats will teach kids about ecology and the environment, serve elderly residents by mowing their lawns, and participate in hoofs-on “YoGoats” classes.

Now that would be a binge-worthy show.