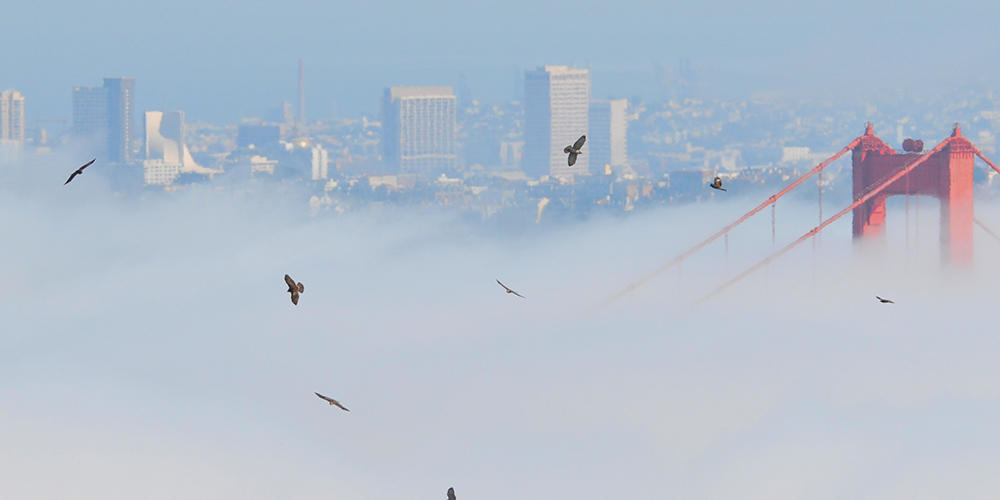 On September 27, 2012, on Hawk Hill, we counted 295 Broad-winged Hawk sightings, 10 times our previous one-day count for that species. We even exceeded our season-total record—248 sightings—in just that one day. Why is this exciting?

Broad-winged Hawks are soaring hawks that nest throughout the eastern broad-leafed forests. They do not nest west of the Rockies except for a swath of breeding range that stretches through northern British Columbia and just touches the southern Yukon. Before 1965, nobody had officially observed a Broad-winged Hawk in California. These were eastern hawks, highly migratory, that piled together into large August flocks and flew en masse to the Amazon Basin. They flew by the thousands via eastern flyways, eventually funneling down the Gulf Coast through Panama, and finally into Amazonia.

In 1972, with his discovery of the fall migration of raptors at the Golden Gate, the late Dr. Laurence Binford also found Broadwings. Here—in California! Annual GGRO counts for Broadwings vary widely from 25 to 248. This is the only place in the state where this species is seen predictably. And from our data, we know that the most likely days to see one are September 26 to 29.

This autumn, we had had strong daily counts (from 7 to 27) for Broad-winged Hawks on September 20–24, and then the fog rolled over the Marin Headlands for two days. On September 27, the fog burned off by 11:30 am, allowing the hawkwatchers to start counting hawks.  Arriving at the Hawk Hill parking area about noon, I saw a swirling flock of mini-Redtails as I stepped out of my car. Twenty-five Broadwings! I was stunned.

And then I saw another flock forming to the east over Kirby Cove. Unbelievable! I radioed up to the hawkwatch dayleader Fran McDermott, who with equal parts joy and anxiety, politely informed me, “We have kettles in every direction.” Every direction! “There’s at least 100 Broadwings in the sky,” she said.

That was the big day, but between fogbanks over the following week, another 300 Broadwing sightings were tallied, bringing our season total as of October 8 to 725—nearly three times our previous high.

So why the Broadwing explosion? What caused this once-in-40-years event to happen? Honestly, I don’t exactly know. I need to trade stories with our other western hawk migration colleagues to see how widespread this occurrence was.

Two interesting points though. (1) All evidence suggests that our Golden Gate-migrating Broadwings have nested, at least in part, in far western Canada. And (2) in most years, we see about 10% adults, 90% juveniles (young of the year). This 2012 flight seemed to contain at least 99% juveniles. This hints that western Canada may have had a banner nestling year for Broad-winged Hawks—now I just have to find some western Canadian ornithologists to check my hypothesis.