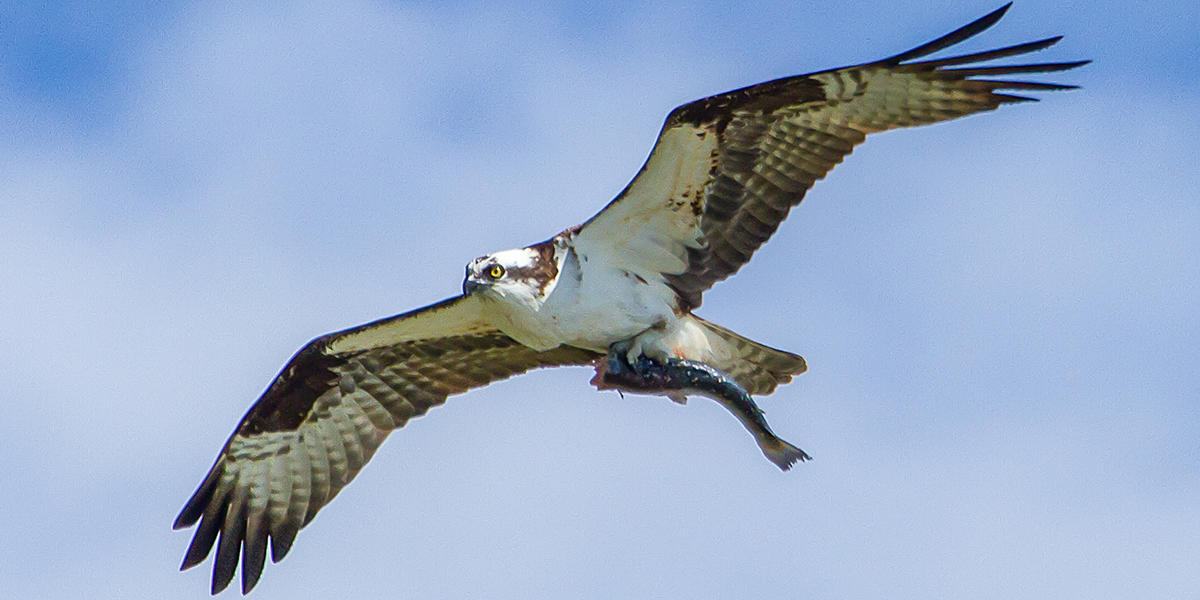 This coming February marks the first meeting of the Citizen Science Association, to be held in San Jose, Calif., and one of the more interesting and powerful CS concepts is the idea of “outcomes.” How is a citizen volunteer changed by participating in scientific research? The results might be mundane, e.g., the citizen reads more scientific blogs per week. Or they might be stunning, e.g., the citizen creates and conducts her own research and publishes the results.  And—oh yeah—that’s what I am here to tell you about. That just happened at GGRO!

Tony Brake and Harv Wilson volunteered for GGRO on a 10-year study of Cooper’s Hawk nesting in the East Bay, but as that project came to a close, they got side-tracked by another raptor species. Tony had recently moved to Richmond, where he soon realized a pair of Osprey were nesting nearby.

Now, there are raptors—and there are Osprey. Osprey are spectacularly graceful, fish-eating eagles, so distinct as a species that they are considered to be just one species the world round.  Every continent but Antarctica has an Osprey, and many populations migrate between continents, say from Eurasia to Africa, or from North to South America. They have 6-footed arcing wingspans, which equip them to hover-hunt above a fishable waterway.

By the DDT era (1948-1972), Osprey, along with Bald Eagles and Peregrines, took a population dive as a result of this widespread insecticide. Osprey numbers in southern California no doubt were impacted longer due to the infamous Monsanto factory near the Channel Islands, as well as continued use of DDT in Latin America into the 1970s.

During the last 30 years, Jules Evens monitored the Osprey nesting colony at Kent Lake next to Mount Tamalpais, a population that peaked in size at 52 pairs in 1994 but since has stabilized at just below that. For years this was the primary nesting zone for Osprey in the Bay Area, until Robin Leong started looking for nesting Osprey on Mare Island and the Vallejo waterfront in 1999. From then until 2007, Robin located one to five nests annually.

This brings us to the spring of 2012, when Tony Brake and Harv Wilson decided to do a new SF Bay search for Osprey nests. They found 16, mainly centered around the Carquinuez Straits, so in 2013, they created a more thorough search methodology. They enlisted the help of more volunteers, and uncovered 26 territorial Osprey pairs stretched along the East Bayshore from the Port of Oakland north to the town of Rodeo. Twelve of these were located on Mare Island, where 22 Osprey were fledged in 2013.

So, all’s well among nesting Osprey in the Bay Area, right?  I’m not sure; the jury is still out as they say. First, Osprey along the Bay’s edge have so far been nesting only on artificial structures; compare this to the Kent Lake Osprey that only nest on trees. It’s not automatically bad that Osprey nest only on towers but if the towers are being used as towers, there can be problems. One such nest in San Francisco was known to be on the same crane from which the America’s Cup boats were placed into SF Bay during spring 2013. To protect the cranes, port decision-makers decided to dump the recently built-upon stick nest into the Bay. Were there eggs in that nest? No one knows for sure.

In spite of the loss of that nest, Tony and Harv have assisted with several other nest saves in 2013–2014, saves that have helped to bolster this local and growing population of Osprey, and have resulted in a new SF Bay Osprey Coalition. Tony and Harv wrote up their own results last winter, and their article on the “Status of Osprey Nesting on San Francisco Bay” will be published any day now by the scientific journal, Western Birds. Bravo for citizen science!