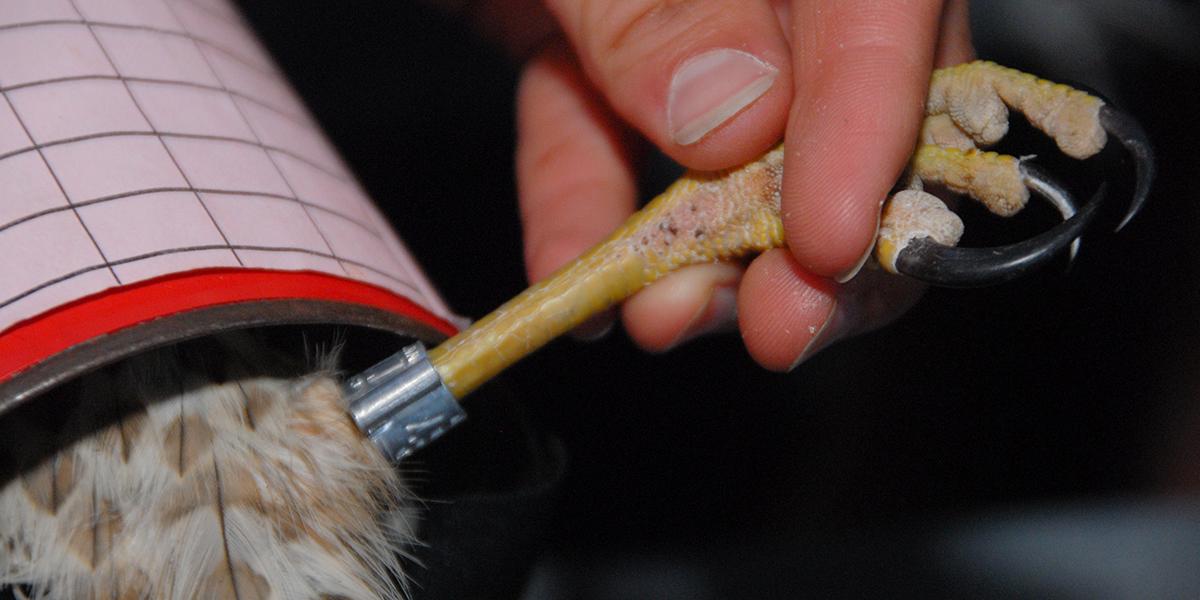 During the fall season, the Golden Gate Raptor Observatory (GGRO) will continue its study of raptor movements utilizing GSM transmitters, which combine GPS and cell phone technologies to “text” researchers the tagged hawk’s locations. Because they are solar-powered, the units have the potential to last several years. They are attached to the hawks as a backpack and stitched together with thread that will degrade after 2-3 years—allowing the transmitter to eventually fall off.

We plan to place 10 GSM transmitters on either juvenile Red-tailed Hawks or Peregrine Falcons by the end of 2013. The females of these two species are the only ones (that we catch) large enough to carry these transmitters, and since we catch few adults, we are limiting our study to juveniles to ensure a large enough sample size. Mapped locations from each tagged hawk will be posted to www.parksconservancy.org/gsm-tracking.

GGRO has begun marking Red-tailed Hawks with lavender bands (above left) and Cooper’s Hawks with green bands (above right). Each band has a 3-digit alphanumeric code (a capital letter above a two-digit number) repeated twice around the band. If you see a color band on a hawk, try to read the code on the band, or get a photo of the leg. Your sightings will allow us to follow the movements of individual birds, which will help us understand where these birds go, how long they live, their survival rates, and what habitats they use.

Report sightings to the Bird Banding Laboratory at www.reportband.gov and contact the GGRO with any questions at (415) 331-0730 or ggro@parksconservancy.org.

Kestrel flesh color and health
Carotenoids are pigments shown to be beneficial in boosting immune function in vertebrates, suggesting that individuals with high levels may be in better physical condition.  Increased carotenoids may also cause brighter colors in bare parts of raptors, such as legs, feet, and cere (bare patch at the base of the bill).  We will examine the parasite loads and immune function of American Kestrels in relation to brightness of cere color.  If brighter color in bare parts does correlate with better physical condition, we may be able to determine an efficient method to reliably assess the health of an individual bird just by looking at their fleshy parts, and not having to draw blood.  This would allow us to quickly assess health of kestrels over many years and examine not only trends in numbers, but trends in condition.

Red-tailed hawks and rodenticides
Second-generation anti-coagulant rodenticides (such as the off-the-shelf product D-Con) are harmful to wildlife due to their ability to bioaccumulate. Poisoned rodents make for an easy meal to unsuspecting hawks and other predators. Rodenticides have been implicated in the deaths of dozens of species of birds alone, totaling thousands of individuals. While large proportions of raptors that have died in local rehabilitation facilities have tested positive for rodenticide presence, virtually nothing is known about their prevalence in free-flying raptor populations. We will examine rodenticide concentration in Red-tailed Hawks migrating through the Marin Headlands to assess frequency and level of exposure in a wild population of hawks.

2013 is an exciting year for research at the GGRO – stay tuned for updates, and thanks for reporting any color bands you may see!