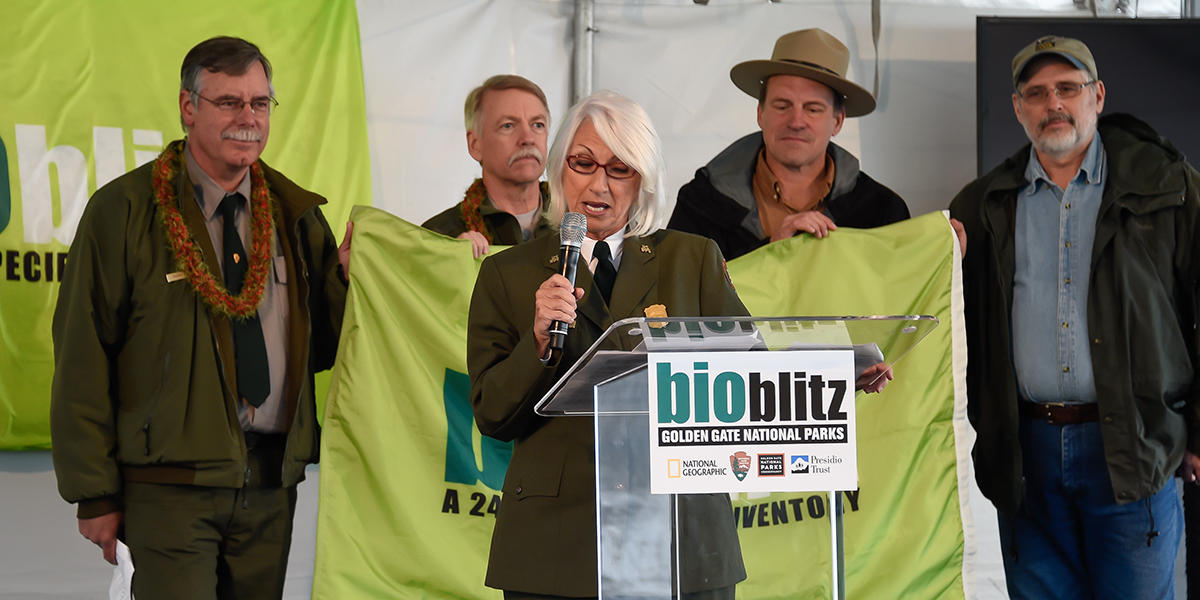 Thousands of Scientists, Students, and Community Members Converge on Parks For Scientific Exploration and Discovery

After two intensive days of exploration and documentation, the Golden Gate National Parks BioBlitz (March 28–29) captured a vivid snapshot of the unique biodiversity in the parks. Led by more than 320 volunteer scientists from across the country, thousands of amateur explorers, families, and students on school field trips conducted a comprehensive inventory of the plants, insects, mammals, birds, and other species that inhabit national park sites north and south of the Golden Gate, including Point Reyes National Seashore, Muir Woods National Monument, the Marin Headlands, the Presidio of San Francisco, Mori Point, and Rancho Corral de Tierra.

“Today we discovered one of the most primitive, multicellular life forms—a freshwater sponge in El Polín. This discovery clearly indicates that this area has been a watershed for thousands of years as this gemmule—or desiccated version of a sponge—could only have survived on land if it had some access to water,” said Dr. Robert Kimsey, a forensic entomologist and faculty advisor to the UC Davis Entomology Club, whose students made the discovery. “It is possible that this sponge has been in this watershed since before humans lived in the Presidio.” The recent restoration of El Polín, in the Presidio of San Francisco, is part of a larger effort to revitalize the Tennessee Hollow Watershed.

“BioBlitz puts a spotlight on the value of science in America’s national parks and offers a unique opportunity for the general public, especially young people, to learn first-hand how important science is in managing parks for the future,” said National Park Service Director Jonathan B. Jarvis, who joined BioBlitzers in Marin and at Crissy Field on Saturday. “We hope that this experience will inspire the next generation to pursue a career in park science,” he added.

"Watching scientists, students, and the general public in the field exploring puts a smile on my face,” said John Francis, National Geographic’s Vice President for Research, Conservation, and Exploration. “Scientists joined students and residents from the surrounding communities and celebrated their unique roles as members of the natural systems where they live. The iNaturalist app, paired with smart phones and pumped-up cell service courtesy of Verizon Wireless, allowed us to document species like never before. This enabled more real-time tracking, greater public involvement, and a faster, larger species count.”

The first BioBlitz was held at Rock Creek Park in Washington, D.C., in 2007; the second took place at Santa Monica Mountains National Recreation Area in California in 2008. Indiana Dunes National Lakeshore was the site of the third BioBlitz in 2009; Biscayne National Park, outside Miami, was the 2010 site; Saguaro National Park in Tucson hosted the 2011 BioBlitz; Rocky Mountain National Park in Colorado was the 2012 host park, and the 2013 BioBlitz took place at Jean Lafitte National Historical Park and Preserve just outside of New Orleans.

View the highlights of BioBlitz 2014 in the Golden Gate National Parks on social media using hashtag #BioBlitz2014. For more information about BioBlitz, go to www.nationalgeographic.com/bioblitz.