From Intern to Program Manager: A Round-trip Migration 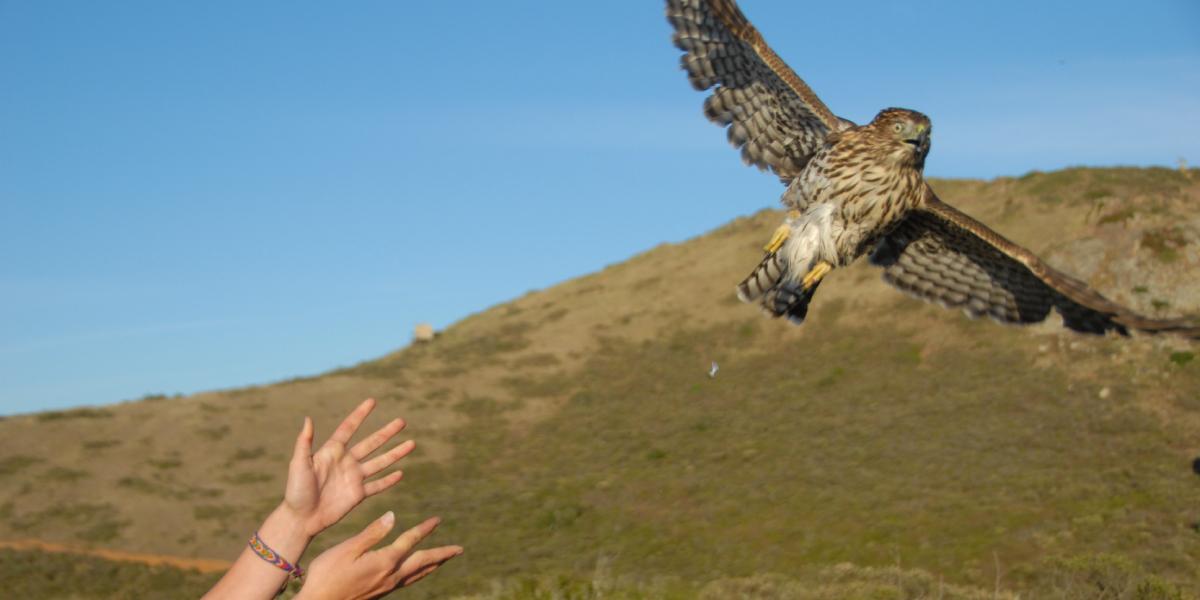 In March 2000, I got a call from Buzz Hull offering me a Parks Conservancy internship here in the Headlands with the Golden Gate Raptor Observatory. I was so excited for the opportunity to work with birds of prey, and that excitement hasn’t abated over the years. My internship with GGRO gave me a valuable set of scientific abilities and experiences that propelled me to new and interesting wildlife jobs—studying black bears in Virginia, swift foxes in Colorado, and I’iwi in Hawai’i, among others—that I couldn’t have secured without the skills I first learned here in the Marin Headlands.

It was due to my experience at the GGRO that I was able to get a job working with Swainson’s Hawks in northern California. This project led to my career as a graduate student, in which I got my Master’s and Ph.D. studying  various aspects of biology of that same Swainson’s Hawk population—from effects of pesticides and conditions in Argentina on breeding and survival, to cheating mates, to plumage polymorphisms.

I have worked with that population of birds for over 10 years now, and have developed a better appreciation for what the GGRO does with long-term monitoring of migrating raptors. The project has taken me to many interesting places. I have been to Argentina, where most Swainson’s Hawks spend the winter, as well Veracruz, Mexico and Anza Borrego, California to see and learn about their ecology outside of northern California.

In March 2012, I again got a call from Buzz Hull and Allen Fish with another offer. This time, I was offered a staff position as the Banding Program Manager, which I will take over for Buzz Hull when he retires after 29 years of working with hawks and the GGRO. For the next several months my job will be to learn from Buzz’s vast experience on how to coordinate a group of dedicated volunteer banders. Together we will trap migrating raptors and continue to advance GGRO’s high level of volunteer training, education, and scientific pursuit. I look forward to working with this enthusiastic group of citizen scientists.

I am just one of more than 80 interns that have worked with the GGRO since 1986. While not all of us have continued as biologists, the training and time we spent in the Headlands has impacted all of us and given us a deeper appreciation for nature, and specifically for raptors.

Interning for the Parks Conservancy is a great way for young biologists to gain the skills, techniques, and experiences necessary to turn them from young, starry-eyed nature enthusiasts into full-fledged biologists. I am excited to have come full circle to be a part of it again.