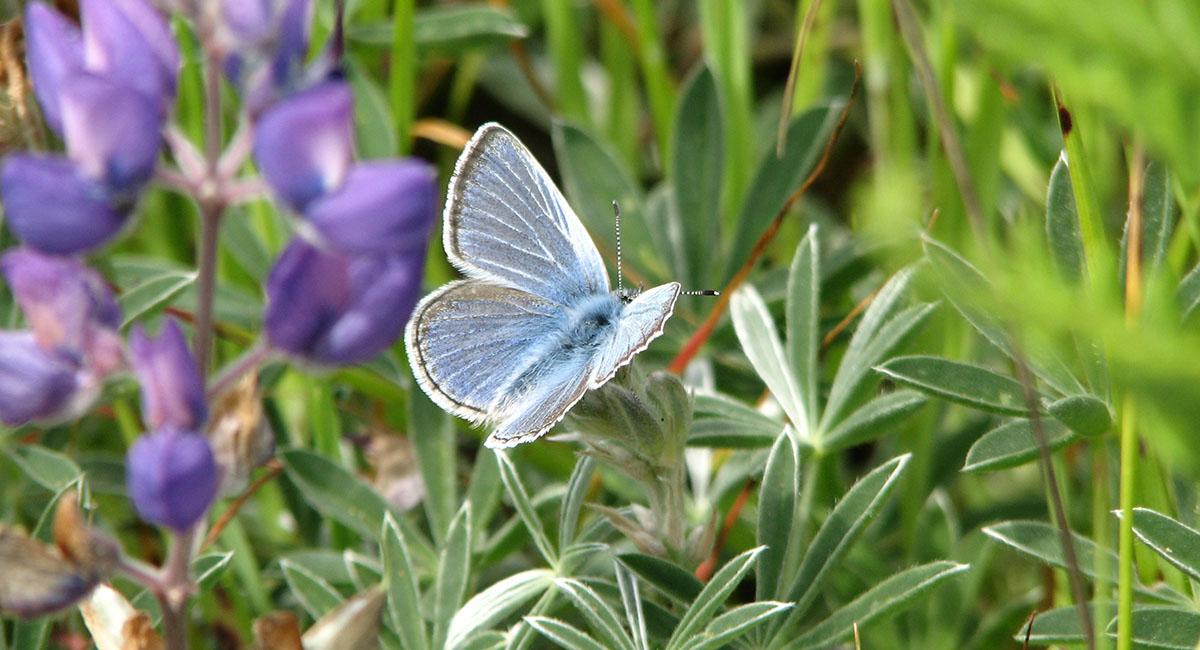 During the late spring and early summer, the Park Stewardship’s Restoration Team goes through the exciting process of monitoring the endangered mission blue butterfly. Each year, the team ventures out to the grassy hills of Oakwood Valley to collect details on the butterfly’s life—its behavior, its numbers, and its location. This information is essential for conservation efforts.

In 1976, the mission blue butterfly (Plebejus icarioides missionensis) was first entered into the federal endangered species list. Back then, the northernmost end of its range was the Marin Headlands. However, in 2001 a sighting of blue butterflies started a long series of studies and surveys resulting in the official acknowledgement of this butterfly at Oakwood Valley in 2003. Ever since, the Park Stewardship Program has been keeping tabs on these butterflies.

The butterflies have a complex life history tightly wound around the biology of their host plants silver lupine (Lupinus albifrons), summer lupine (Lupinus formosus), multi-color lupine (Lupinus variicolor). For most of the year, while the lupines focus their energy into underground growth, the green mission blue caterpillars go into a state of dormancy, or diapause.

In the late spring they awake from their slumber and emerge as flying adults for 7–10 days. During this time they find a mating partner and the females lay tiny little white eggs on the leaves of their host plants.

When this new larva hatches it starts eating away before going to sleep and starting the cycle of life all over again. Because of its strong attachment to its local habitat and vulnerable state while in the larval stage, habitat loss and trampling threaten this butterfly at all of its life stages.

This year, since May 4, a total of 222 butterflies have been seen—and the season isn’t over yet!  Compared to last year’s total of 87 butterflies, the mission blue’s population is on the rise. We are working hard to restore and protect the mission blue’s sensitive habitat to support the continuance of this positive trend.