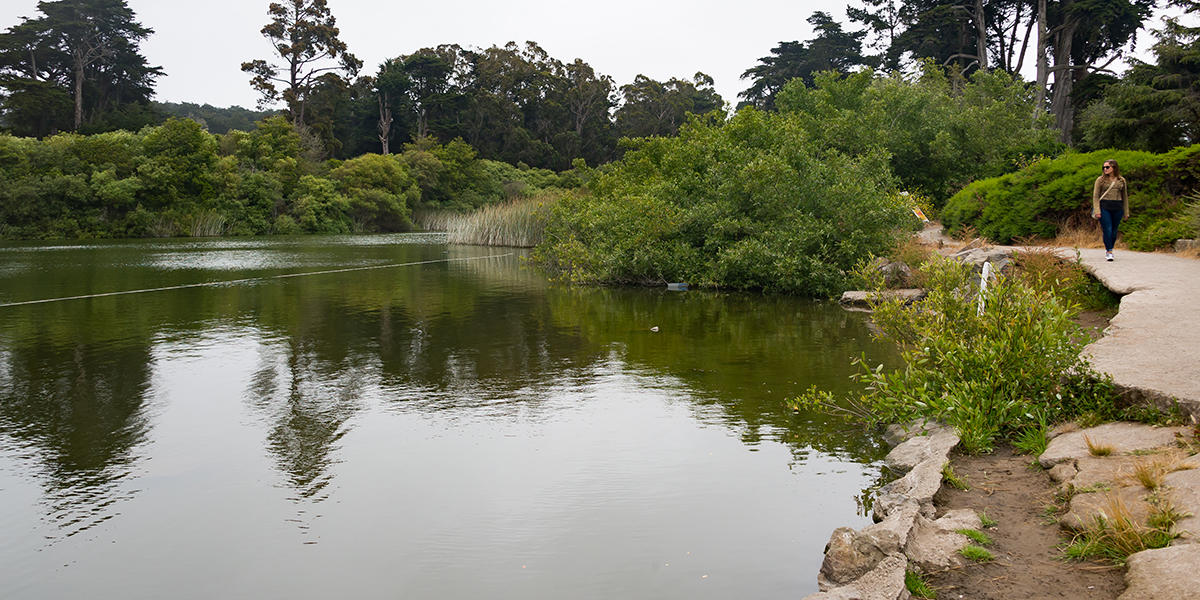 A little more than a year ago, I learned that we would be collecting and growing submerged aquatic vegetation (SAV) at the Presidio Nursery. Honestly, up until that time, I’d never even given a second thought to those stinky “seaweed”-like plants that grow under the surface of the water.   To me, they were those creepy plants that rub up against your legs when you’re swimming in a lake—and give you the heebie-jeebies. Needless to say, I didn’t know much about them and even less about how to grow them.

As you may have heard, Mountain Lake, one of the few remaining natural lakes within San Francisco, is undergoing a major cleanup. Over many years, the lake’s water quality and surrounding habitat have become polluted. Currently, I am part of a large team, led and supported by the Presidio Trust, to give the lake a complete overhaul.

Aside from dredging tons of toxic sludge out of the lake bottom, later phases of the project include bringing back many lost animal and plant species, including SAV. Stepping back in time, we know from the records of early botanists that SAV used to grow at Mountain Lake. These plants and other important species have disappeared. If all goes as planned, the plants will be restored to the lake starting in the spring of 2014—one more step towards returning ecological function to this historic body of water.

Between now and then, the nursery team is busy locating, collecting, and growing SAV, for the first time, in order to have them ready for the lake by next year. One of the first hurdles was simply to confirm where the SAV species could be collected. Apparently, I’m not the only person who hasn’t paid much attention to these plants. As I began my research, I found that, in general, many of the local SAV populations are poorly documented. Luckily, a little plant detective work turned up a few good leads for each of the seven species slated for reintroduction.

However, there was no shortage of information about the very important ecological role of these plants. SAV is the home to a large variety fish, frogs, invertebrates, and other mammals. The plants are delicious treats for a wide range of water birds. They play an important role in reducing water turbidity and are considered one of the best indicators of good water quality.  They release oxygen into the water, much-needed by underwater organisms like fish. In addition, they help keep water nutrient levels in the water in balance—preventing nasty algae blooms.

Accessing the SAV collection sites has been an absolute adventure. I’ve found my regular yoga practice has been helpful for keeping my balance when standing in chest waders, along the mucky edges of the frog ponds at Muir Beach. Sheer determination has come into play while squeezing a rowboat through the vegetation on the edges of Tennessee Cove, and pulling an inflatable kayak through the cattails and willows on the edge of Rodeo Lake. The prize of finding bountiful sago pondweed and coon’s tail has made all the effort worth it.

Growing these plants should be as easy as dumping a bucket of them into a tank of water, right? Well, I sure hope! That will have to be the topic of a future article. I can say that the nursery is trying a vast array of barrels and tanks, shallow and deep, translucent and dark, indoor and outdoor. Surely, one of these combinations is guaranteed to be a suitable growing environment for these water-loving plants.

So next time you are out taking a dip at your favorite lake, remember, it’s never too late to appreciate something that has always been just out of sight under the surface of the water.