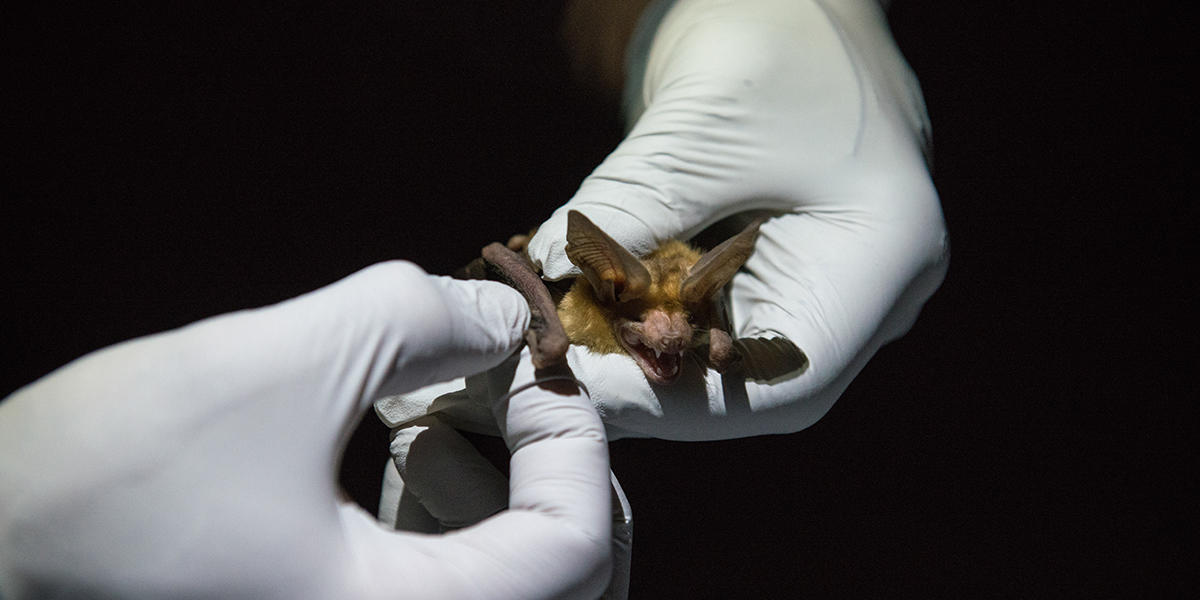 On a mountain that sees 5 million visitors per year, not much is known about the winged, nocturnal creatures that inhabit it.

In October 2016, the Tamalpais Lands Collaborative (aka the TLC: the four land management agencies of Mt. Tamalpais, plus the Parks Conservancy) released Measuring the Health of a Mountain: A Report on Mt. Tamalpais’ Natural Resources.

The report found that overall the mountain is in “fair” health. But it also found that the conditions of many species—including many bats—remain unknown.

To help close those data gaps, the partners of One Tam—the community initiative of the TLC—launched a three-phased, three-year scientific research project. This was designed by a team of resource managers from each partner agency, working in partnership with the United States Geological Survey (USGS). At the helm of the field work are Catey Ritchie, a resource conservation project manager for the Parks Conservancy, and Gabe Reyes, a USGS biologist.

Ritchie and Reyes say they know of 15 bat species that are likely to appear on Mt. Tam. But aside from some basic ecology and some historical bat survey e orts, that’s about the extent of their knowledge for the majority of local bat species.

“For a lot of the species, we don’t know a lot about the roosting habitats that they’d be using on Mt. Tam,” Reyes explains. “We might have an idea that a particular bat species roosts in a tree, but we don’t know what type or species of tree they’re using, and what stage of maturity those trees need to be.”

And deepening our understanding of bats isn’t just an academic exercise—it’s a conservation imperative. North American bats are facing the epidemic of white-nose syndrome. This disease has been killing millions of bats in the northeastern United States, and has recently been spotted in Washington State. To better protect local bat populations from disease and other threats, ecologists simply need more information.

The first step in this research project is to acoustically monitor bats on Mt. Tam with an ultrasonic micro- phone attached to a tall “mic stand.” Equipped with this 20-foot telescoping pole and battery, Ritchie treks to randomized locations—often in remote areas.

“The field work has been really intense,” Ritchie says. “There’s a lot of exploring that I’m reveling in.”

The mic setup records sounds from 15 minutes before sunset until 15 minutes after sunrise. After a week, Ritchie hikes out and retrieves the equipment. She currently has six rotating mics across Mt. Tam.

Reyes and Ritchie then analyze their recordings using specialized software that helps them identify the bat species they’re hearing.

“All the bats are insect-eating in this region; they actually optimize their echolocation calls to serve the purpose of finding food,” Reyes explains.

Species such as the big brown bat or Mexican free-tailed bat, which forage high above the ground in open air, emit lower frequency calls that travel far but don’t return a lot of detail.

But smaller bats, such as Yuma myotis, forage for may flies and mosquitoes close to the water. These bats produce higher pitched, “quieter” calls that provide more detail about their targets and allow them to y through “vegetative clutter.”

The species data collected from acoustic monitoring can then be correlated to the vegetation at each listening point to learn more about the bats’ habitat.

The second phase of the study has just begun. In July, researchers briefly captured bats at Samuel P. Taylor State Park with “mist nets” (think of a volleyball net on the ends of two poles). Across nine sites throughout Marin, this mist-netting phase will help ecologists identify reproductive conditions and gather data (mass, forearm length, etc.) before releasing the bats.

After mist-netting, the third phase will involve placing radio transmitters on bats to track their movements and determine roosting habitat.

The benefits of this project will extend far beyond land management decisions on Mt. Tam. Researchers will eventually turn this data over to the North American Bat Monitoring program, which will help boost the long-term sustainability of bat populations across the continent.