One Cool Cucumber: Marah and its Frightening Fruit 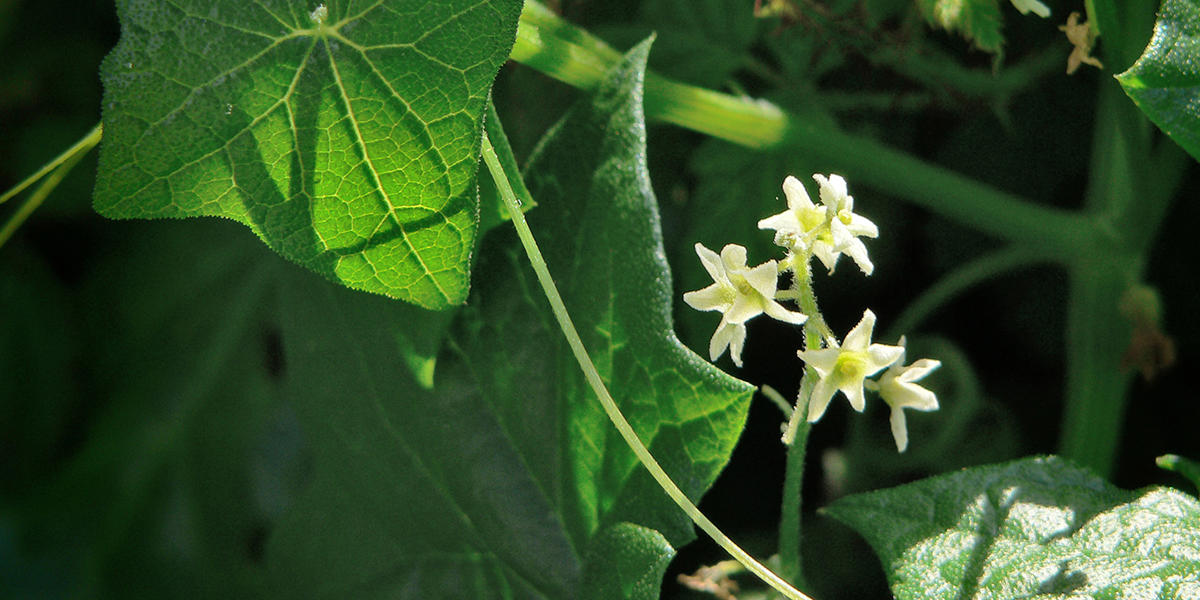 Known by a number of names (including wild cucumber, man root, and big root), Marah fabaceus, or Marah oreganus, isn’t what you would call a soft and fuzzy native plant, or one that might incite “oohs” and “ahhs” as you hike the park trails.

This creeping ground cover, which you’ll find in chaparral and coastal scrub environments in our Golden Gate National Parks, can crawl up to several inches a day during the rainy season (think The Day of the Triffids)! This swift growth allows the plant to maximize photosynthesis when the conditions are right; Marah prefers the foggy, rainy days of winter.

Aside from its somewhat disturbing and eerie rate of growth, the vine is also notable for producing a fruit that might, to say the least, catch you off-guard—a hardened, green, spiky ball that bears little resemblance to its more salad-friendly cousin. The dangerous-looking spikes help discourage predation from local wildlife. Though not edible (Marah, after all, is Latin for “bitter”), the fruits were collected for medicinal purposes by indigenous Californians to be used as a purgative or laxative.

Along with that unsettling fruit, Marah oreganus also produces an adult-leg-sized tuber—its enormous proportions fed by all the energy collected by the prolific foliage. Larger specimens of the tuber can grow to be several feet in diameter and weigh several hundred pounds! Having a root this large helps the plant survive the long dry summers here in the Bay Area, by spreading out and down to reach nutrients and groundwater.

After the hard work of the plant’s rapid growth during the winter months, a plain flower spike is sent up in the early spring. Though not the showiest of blooms, the plain, greenish-white flowers serve as an important nectar source for butterfly populations.

Though it’s not the most picturesque member of our plant communities here in the Golden Gate National Parks, this wild, not-so-pretty native proves that plants are not always there to be something nice to look at, but can serve more utilitarian roles within a healthy, thriving ecosystem. We’ll just keep our distance and let this fast-moving, spiky native do its thing!

Help us reach our goal of 100 new Golden Gate Keepers!

Start your monthly gift before February 18 and an anonymous donor will give an additional $150 to the parks! PLUS as an added bonus, you’ll get a free deck of Alcatraz Rule and Regulations playing cards.