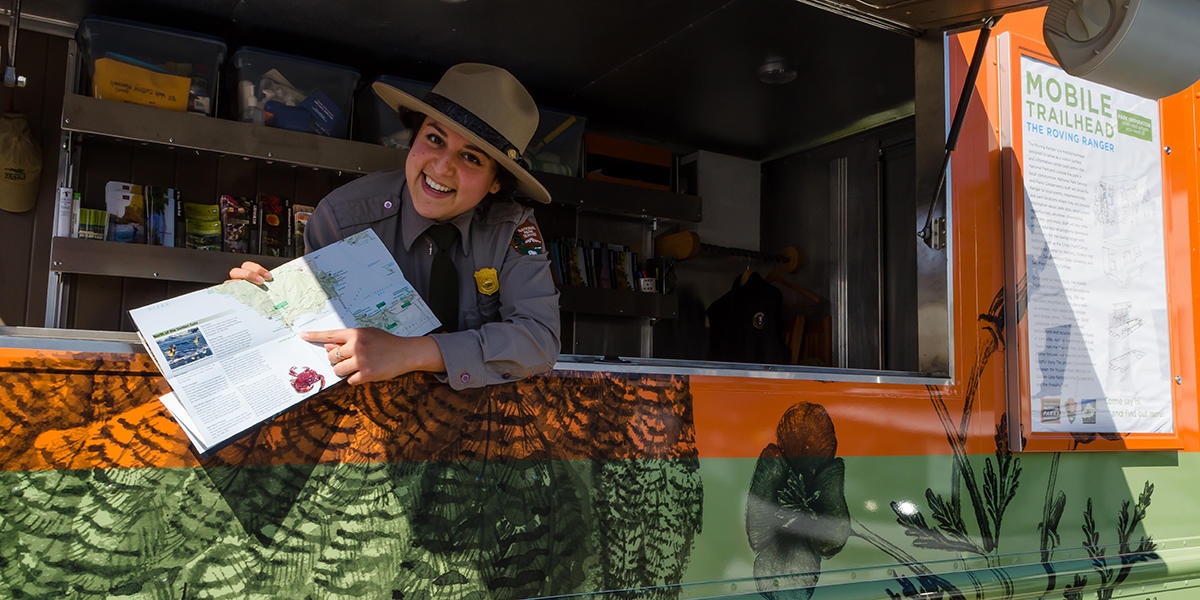 The Roving Ranger is a mobile trailhead designed to serve as a visitor contact and information center both within our national parks and outside the park. Alison Taggart-Barone/Parks Conservancy

The Roving Ranger, the mobile outreach truck for the Golden Gate National Parks, is turning FIVE years old!  It’s been an epic road trip around the Bay, meeting over 44,000 people along the way. Though the engine’s revved up and excited to keep on truckin’, let’s put it in park mode for a moment and "take 5" to look back at the highlights since 2013.

1. The truck has logged enough miles to drive across the USA—three times over!
That’s a lot of time behind the wheel! Good thing the truck is shared between the Parks Conservancy, National Park Service, and The Presidio Trust, with over 115 staff members who have done outreach at events. Our favorite road trip snack? It’s It!

2. The Roving Ranger has a sister truck on Mount Tamalpais
After the success of the original program, it became clear that our partners with the One Tam initiative needed their own vehicle to reach communities and park sites surrounding the mountain. Base Architects helped us create a new truck with the amazing resources of the mountain in mind. Like all sisters, they bicker occasionally, (“Stop wearing my tires, Tammy!!”) but they’re besties at heart.

3. The Roving Ranger has driven in eight parades
Who doesn’t love a parade? We’ve had a blast driving the Roving Ranger and celebrating with the community. From San Francisco Pride, to the Bayview Black History Month Parade, and Fog Fest in Pacifica, it’s easy to get used to smiling and waving while people cheer...if only all of Bay Area driving were so fun!

4. Four animals that live in our parks and can be found on the trucks exterior wrap
We’ve got two brown pelicans, a northern spotted owl, and a red-shouldered hawk flying on the roof. The Roving Ranger is a great place to learn more about the amazing creatures that call our parks home and all you can do to help protect them. Plus, you’ll get an animal tattoo to sweeten the deal. Don’t worry Mom, they’re temporary.

5. The Ranger helped recruit 248 students for internships in the parks
The Roving Ranger has become a fixture on campus at City College and San Francisco State University each fall as park staff talk with students about all the exciting academic internship opportunities around the parks. After five years on campus, the Roving Ranger has become quite the super senior!