Talkin' A Different Kind of "Turkey" 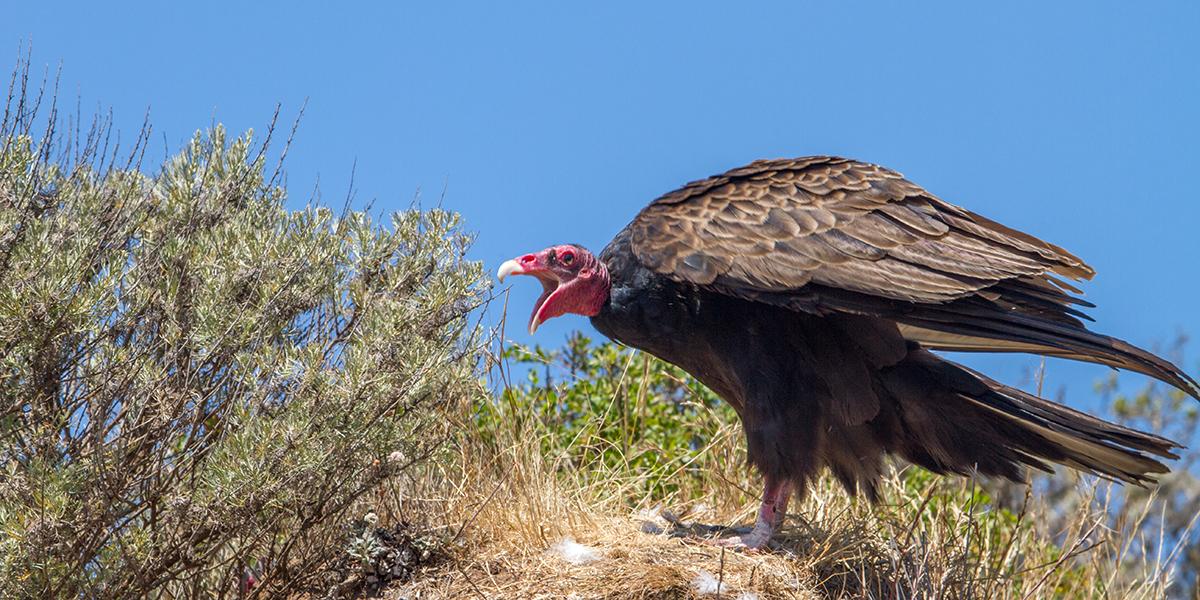 I love Turkey Vultures. From the wrinkled red head to the teetering, physics-defying flight, right down to their ridiculously large nostrils. Did you know they defecate on their own feet (for thermoregulation) and vomit in response to predators (to totally freak you out, obviously)?

I probably don’t win myself many return invitations when the subject comes up at parties, but I can’t help myself. Turkey Vultures are amazing.

The world would be a very different place without scavengers, and vultures in particular. In fact, we might not be who we are today without them. Early hominid reliance on carcasses as a source of meat, and the competition with fellow scavengers that went with it, are thought to have contributed to the evolution of human tool use, cooperative food acquisition, and even language development—the very things that define us as a species!

So perhaps it’s not surprising that vultures figure prominently in human culture. From Tibetan sky burials to the ceremonial role of condors among native peoples in California, across the globe they are symbols of rebirth and renewal.

Vultures also provide a crucial ecosystem service. Natural immunity to pathogens is a necessity for being a scavenger, thus they actually reduce the spread of disease by shortening the time carcasses stick around in the environment. But this leaves scavengers vulnerable to contaminants like lead and rat poisons, as they go about their job cleaning up our dead.

The truth is that we know very little scientifically about West Coast Turkey Vultures (TVs, as we call them at GGRO). Found all the way into Canada during the breeding season, many populations migrate to Mexico, Central America, and southern U.S. coastal regions.

Do they pass through the Golden Gate? We don’t know! We count anywhere from 6,000 to 10,000 TVs here each fall—about 30% of all our migrants—so there’s a good chance some aren’t local.

So how do we find out? Traditional bird-banding techniques aren’t an option (remember that leg pooping thing), which means studying TVs presents some unique challenges. GGRO is piloting a project to hopefully learn more about these ubiquitous yet enigmatic birds.

Our initial goals are simple: to track individual Turkey Vultures beyond the Marin Headlands using GSM transmitters, and to quantify their exposure to environmental contaminants, rat poisons in particular. Who knows where those answers might lead?

I, for one, will be at the head of the line to help—even if it means learning firsthand what they had for lunch!

Keep up with our research, or see how YOU can be involved at ggro.org.
Learn more about GSM tracking: parksconservancy.org/conservation/plants-animals/raptors/research/gsm-tracking.html.

Laura Young is a Texas native who completed her BS in Biology from UT Austin, where she conducted research on mate preference and gene flow in tropical butterflies. She then joined the Animal Behavior program at UC Davis, and finished her MSc in 2008 studying antipredator behavior of California ground squirrels.