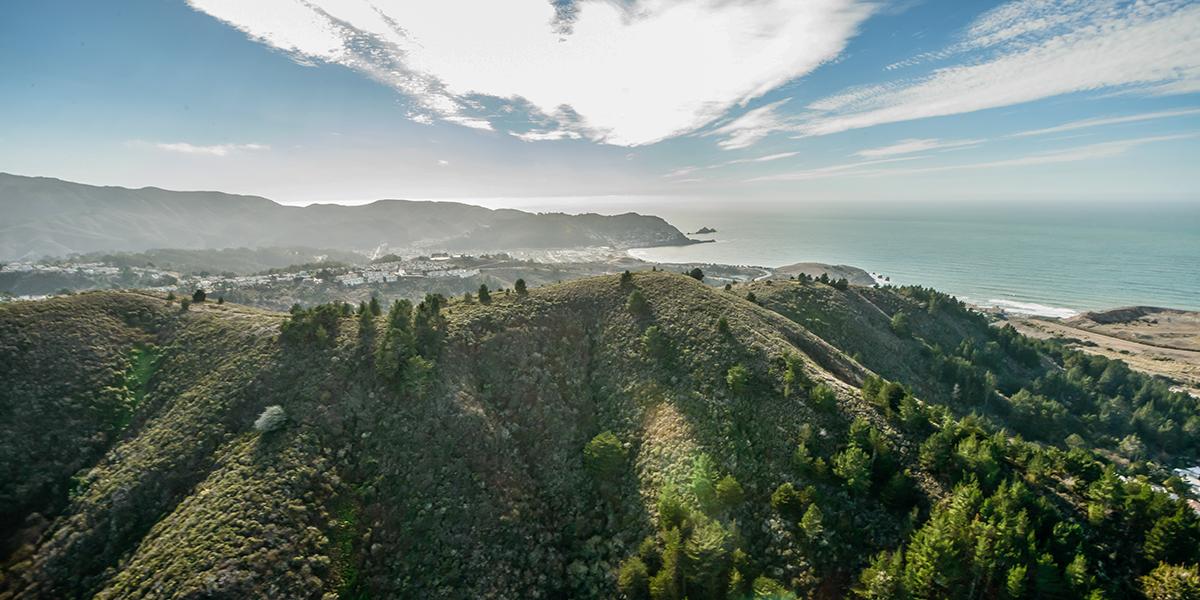 I want to tell you about one of the last great places to see the Bay Area landscape as it might have looked a few months prior to European discovery in the fall of 1769: shortgrass prairies and coastal scrub, native habitats with very little disturbance.

Ironically, the ridge now known as Sweeney Ridge was also the place where the Gaspar de Portola and his men scaled the grassy hills from the west and became the first Europeans to look out over one of the great bays of the planet. This hike, secreted in a quiet corner of the Golden Gate National Parks, is on the east side of Sweeney Ridge, starting at the Sneath Lane trailhead.

I like to do what I call the “Un-discover San Francisco Bay Hike.” Starting at the Sneath Lane gate, it is a mere 1.5 miles and some 600 feet to the top of this eastern face. As you walk, imagine rolling back the carpet of time, and focus your attention on the plants to start. There are big shrubs everywhere: coyote brush, bush lupine, coffeeberry, coastal sage, and twinberry.  These are the outer face of coastal scrub habitat, the woody scaffolding that creates supports for vines, like wild cucumber and Dutchman’s pipevine.

When I was young, I squirmed my way under some Sweeney Ridge coyote brushes just to see if I could, and to see what was there in the mysterious coastal scrub understory. What I found were some gorgeous plants—trilliums, irises, shooting stars, paintbrush, and the fragrant ground-running mint vine known as yerba buena. There was also a lot of poison oak, so let’s just say I didn’t try that again.

Coastal scrub’s modest dimensions provide cover for many animals, including striped skunks, gray foxes, and bobcats. Deeper in, it hosts a rich diversity of birds, though many are versed in the fine art of camouflage. Your best counter-maneuver is to learn and listen carefully for their songs.

The unquestionable mayor of Coastal Scrub in the Bay Area must be the Wrentit, a small gray bird with tons of character. Wrentits are unique to the California-Oregon coastal belt, and one of its most insistent singers. Males and females both sing the “bouncing ball” call, a one-note series of whistles that can be mastered quickly by most humans.

Other scrub birds to watch for are Bewick’s Wrens, Western Scrub-Jays, Allen’s and Anna’s Hummingbirds, and my personal favorite, the California Thrashers.

California Thrashers are cousins of the Mockingbird, told by their similarly chattering songs that include double phrases, but I like them for their ground-racing style. The California Thrasher has also an impressive sickle-shaped bill, an effective probe for freeing larval bugs from their burrows.

As you reach the top, turn your attention to the sky. Sweeney Ridge is the last northern bit of the Santa Cruz Mountain range, a 100-mile, longitudinal ridge that assists the northbound flights of migrating raptors in the spring. If you put in some time, you might even detect the flow of Red-tailed, Sharp-shinned, and other hawks above the ridgetop’s eastern flank.

As your eyes follow these ancient migrants out over Daly City and San Bruno Mountain, how can you not take in this stunning expanse of inland water, however impacted, and marvel at its resilience and beauty?