What Happens When a Massive Redwood Tree Falls 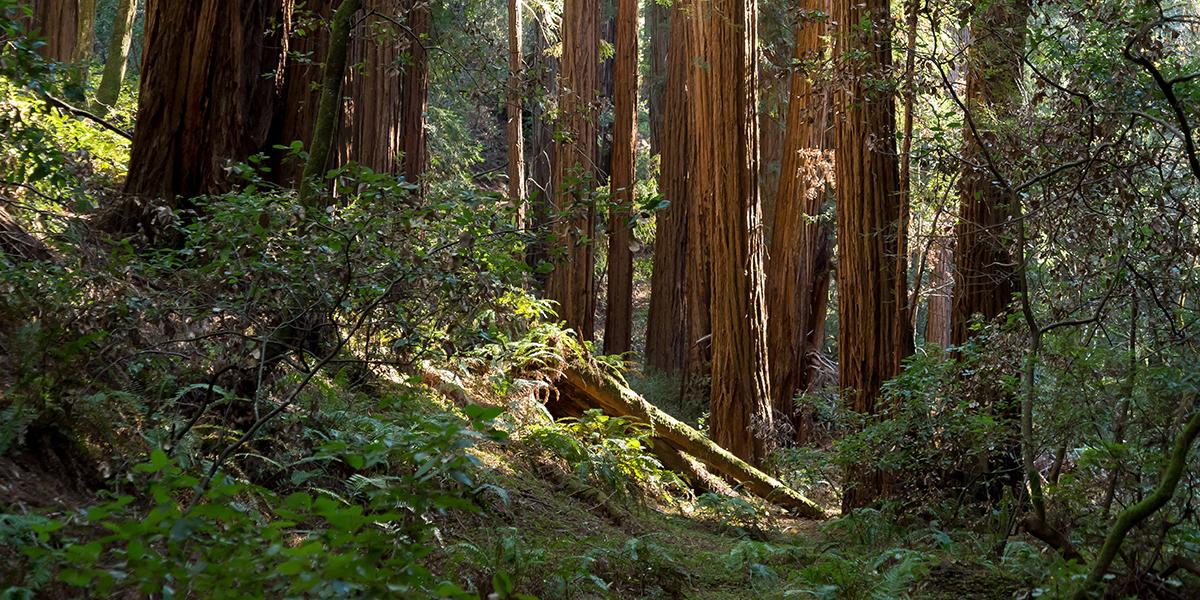 Editor's note: This story was originally published in early 2017.

With winter storms buffeting the Bay Area, about 10 to 12 towering coast redwoods in Muir Woods National Monument toppled over two months during the winter of 2016-17, according to trail crew members in the Golden Gate National Parks.

“We’ve been responding to fallen trees a couple times per week, I’d say,” says Corbett Robinson, a trails maintenance supervisor with the National Park Service (NPS). “That’s been going on all winter—or at least when the heavy rains started.”

Wind, soil saturation and destabilization, the rerouting of Redwood Creek (which runs through Muir Woods), and fire are all suspects when trees topple in the national monument.

Some Douglas firs and California bay laurels certainly have succumbed to the stormy winter weather. But what happens when a coast redwood—the tallest living thing on the planet—comes crashing down?

“There’s often the distinct sound of cracking and crashing—and a redwood takes a long time to fall because the canyon is narrow,” says Mia Monroe, community liaison in Marin County for NPS. “If a tree falls, other trees catch it, and sometimes it breaks off other branches, and sometimes it skidders and scratches its way down the bark of other trees—and sometimes it takes other trees down. So it’s really a redwood symphony out there of creaks and groans, cracks and sharp thuds, and it’s very, very dramatic.”

After more than 35 years on the job, this awesome scene doesn’t unnerve Monroe. In fact, she considers it a privilege to experience a storm in the famous redwood grove.

“I can see why one of John Muir’s goals was to be in a forest during a winter storm, to hear the trees not only sway and creak, but also [to witness] branches and trees falling,” Monroe explains.

You can get a nine-second glimpse at the epic thuds a falling redwood makes on NPS' website.

How to Move a Redwood

Bearing witness to such a natural phenomenon is one thing—and dealing with the aftermath is another. When redwood trees fall over trails and park structures, the rough and tumble crew of the NPS trail team comes in.

Depending on the size of the tree, removing a fallen tree that’s obstructing a path can take 10 minutes—or multiple days. In early February 2017, it took a team of seven trail crew members more than three days to remove a particularly hefty redwood (typically, a removal only requires three to five trail crew members).

“It probably weighed around 16,000 pounds,” Robinson estimates, adding that the trunk was four to five feet in diameter.

According to Robinson, the crew’s primary objective is to cut the tree out of the trail so the pathway is passable again. In a perfect situation, trees would fall perpendicular to the trail, so that crew members can simply cut the obstructing section and “scooch” it out of the way by hand.

But then there are those circumstances presented by the 16,000-pound redwood. Because of its size and the way it fell parallel to the trail, this tree required a rigging system.

“It’s kind of similar to a winch on the front of a truck [you’d use] when it’s stuck in the mud,” Robinson explains. Instead of a truck, however, the crew uses a grip hoist to give them the leverage needed to move the tree—with their bare hands.

And despite the inherent danger of moving living monuments, Robinson and his crew love the work they do—and it shows.

“[I love] watching the Trail Crew respond, in a way that is so respectful to the trees and so respectful to that natural chaos,” says Monroe. “It’s really wonderful to watch how they’re responding and working with the forest to manipulate it as little as possible, while providing safety and offering new logs to the forest.”

The trail crew takes such care to preserve natural processes because the collapse of a redwood begins a remarkable regeneration of life.

“One thing I learned very early at Muir Woods is that what we often think of as a crisis in the forest is actually an amazing opportunity—either for additional light to reach the forest floor—or for trees to assume a new position as a log on the forest floor, [becoming] amazing time-release fertilizer as it slowly decomposes,” Monroe explains.

It can take centuries for a redwood to fully decompose, all while serving as a “condominium of life,” as Monroe puts it. The new window in the forest canopy admits all-nourishing sunlight for surrounding trees, and the fallen log opens new homes for wildlife (including lichen, insects, and more), expanding the forest food chain and bolstering biodiversity.

When a tree falls into a stream, like Redwood Creek, it also serves a key purpose in providing a safe habitat for aquatic species.

“It slows down the torrents of water that come down in a storm, and when it slows down the water, the gravel deposits—and that’s what the fish need to spawn,” Monroe says. “It also…forms quieter backwaters where fish and other critters can take refuge, and creates deep pools that baby fish need to grow in.”

So when visitors approach Monroe to express their sadness for the fallen redwood trees, Monroe reassures them that their new station—across the forest floor—is actually something to celebrate.

“They don’t really die,” Monroe explains. “That’s why I call it the circle of life—because they’re just taking a new position in life.”