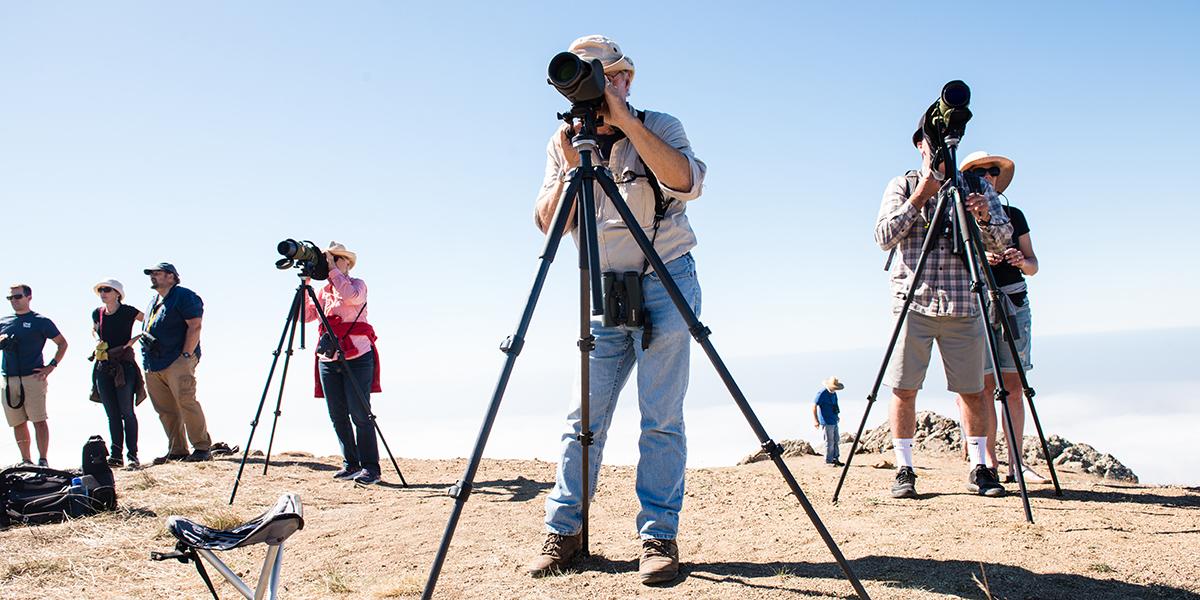 The Bay Area is home to the biggest migration site for hawks, eagles, kites, falcons, harriers, and vultures—collectively known as raptors—in the Pacific States.

They do! Or rather, some do. We see Osprey and Peregrine Falcons each autumn that may be winging their way to the far reaches of South America, while other birds, like Cooper’s Hawks or American Kestrels, may be striving merely for a winter in Los Angeles.

But not all raptors migrate. Many Hawk Hill visitors over the years have told me: “My hawks don’t migrate.” And they could be right. Some locally nesting raptors—for example, Red-tailed Hawks, Northern Harriers, and White-tailed Kites—may not migrate anywhere beyond the seven Bay Area counties in their lifetime.

Here’s an example: one of our founding banders, Will Shor, banded a young female Red-tailed Hawk in the Marin Headlands on September 14, 1992. The bird had just fledged from her nest that summer, but we had no way of knowing where she had hatched.

Four and a half years later, a bird bander working in the Presidio re-trapped the same hawk, which was then wintering in San Francisco. Seventeen years later—February 12, 2014—we got an e-mail letting us know that a Parks Conservancy staff member working on restoring the coastal bluffs just below Lincoln Boulevard in the Presidio had discovered a recently dead Red-tailed Hawk, with a band on its leg.

Sure enough, here was our Redtail from 22 years earlier, a hawk that survived 21 years and 8 months in an intensely urban environment.  The three times we had had contact with her suggested that she lived in a very small territory, maybe 10 square miles or fewer. Of course, we have no knowledge about whether she made grand flights to Alaska or Mexico in between the times she was found and her band was read.  But her connection to the parklands of the Golden Gate is clear.

As important as stories like these are to understanding the lives of raptors, they are tremendously hard to discover. Years of work from park volunteers made this possible, but of course we still have lots of questions. This is part of what makes the natural world so psychologically enticing: you get some answers, and your refine your questions. You deepen your relationship with the birds, with their lives and mysteries.

This spring, we are recruiting both new banding and hawkwatching volunteers to start the 2014 migration season with the Golden Gate Raptor Observatory. As a GGRO volunteer, you’ll be asked to come out for one regular full day in the field, every two weeks, from mid-August through early December. No experience is necessary, although some ability to clamber up and down the hills of the Marin Headlands is essential, as well as attending some trainings before the season begins.

If you’re interested, just come to one of our three recruitment meetings—no obligation! We’ll explain the details, and you can decide if you want to apply. Attend one of the following (they’re all the same):

All meetings will be at Golden Gate National Parks Headquarters, Building 201, Upper Fort Mason in San Francisco. For more information, or if you cannot attend a meeting but you would like an application packet, please call (415) 331-0730 or see our website.