While walking around our parks, you may notice the towering cypress trees and smell the beautiful coastal sage, all while taking in grand vistas. It’s all very awe-inspiring. However, there might be a few organisms you’re missing while admiring the incredible sights, right under your feet. They’re right under logs and fallen branches or crawling up the bark of trees. That’s right! We’re talking about fungus, algae, and lichens.

What are these fascinating organisms? Let’s take a minute to understand and appreciate those creatures and maybe next time you’re on a walk, you’ll spot some too!

When most people think “fungus” they think of mushrooms and though mushrooms are certainly the most charismatic fungus, the broader definition of fungus is: “any of a diverse group of eukaryotic single-celled or multinucleate organisms that live by decomposing and absorbing the organic material in which they grow, comprising the mushrooms, molds, mildews, smuts, rusts, and yeasts…” Fungi are organisms that essentially rely on tiny structures called mycelium to digest the organic substrate they’re growing on and have sporocarps, which are used to distribute spores to make more fungus. For example, when looking at a mushroom, the part we see is the sporocarp and the hidden part that attaches the mushroom to whatever it is growing on has the mycelium. Fungi can be parasitic or saprophytic, which means they can either feed off living organisms, like tree roots or bark, or help decompose deceased organisms. Fun fact: one of the largest if not the largest living organism in this world is a species of honey mushroom (Armillaria ostoyae) that kills trees. This organism is about as large as 665 football fields!

Now that we have a definition, what are some cool fungi we can find in our parks? 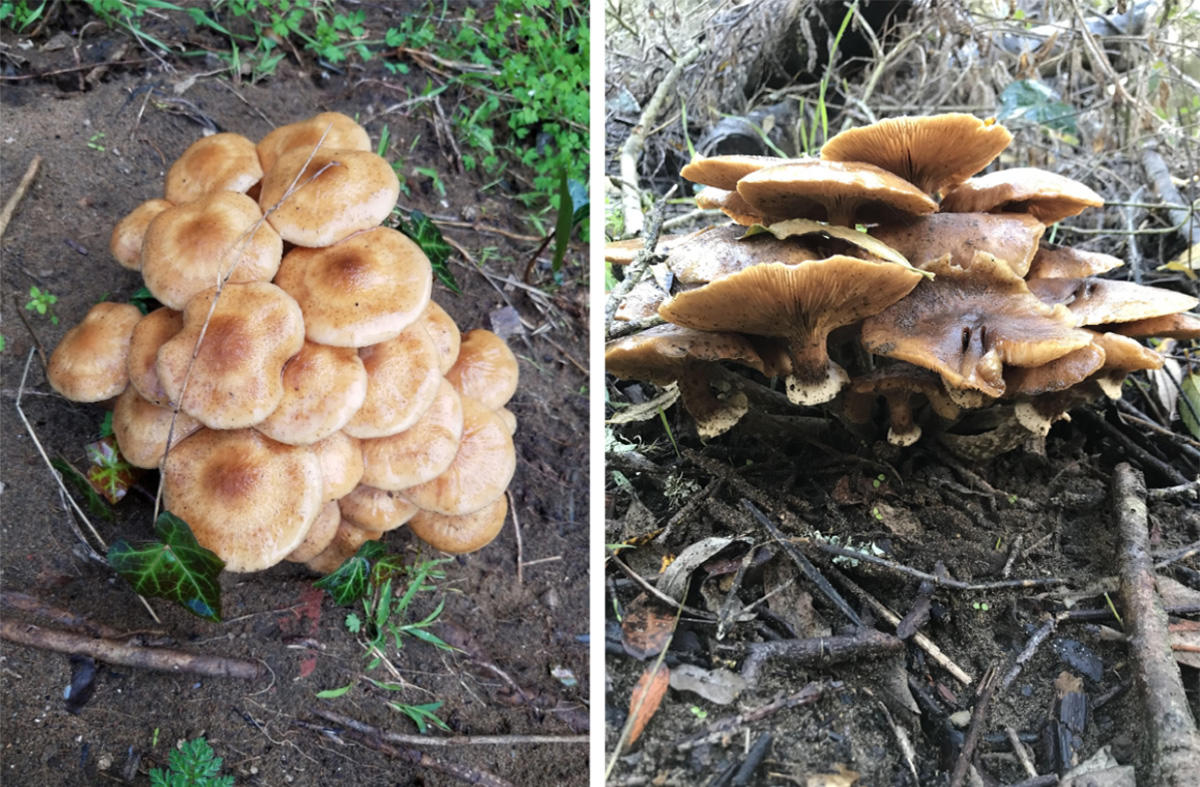 Did you think I’d just mention honey mushrooms and not mention we have a species right here in our parks? Last time the San Francisco Stewardship team was at Lobos Creek in the Presidio, we found a type of honey mushroom right next to the creek. This kind of fungus is found throughout temperate regions and is able to produce bioluminescence in its mycelium. 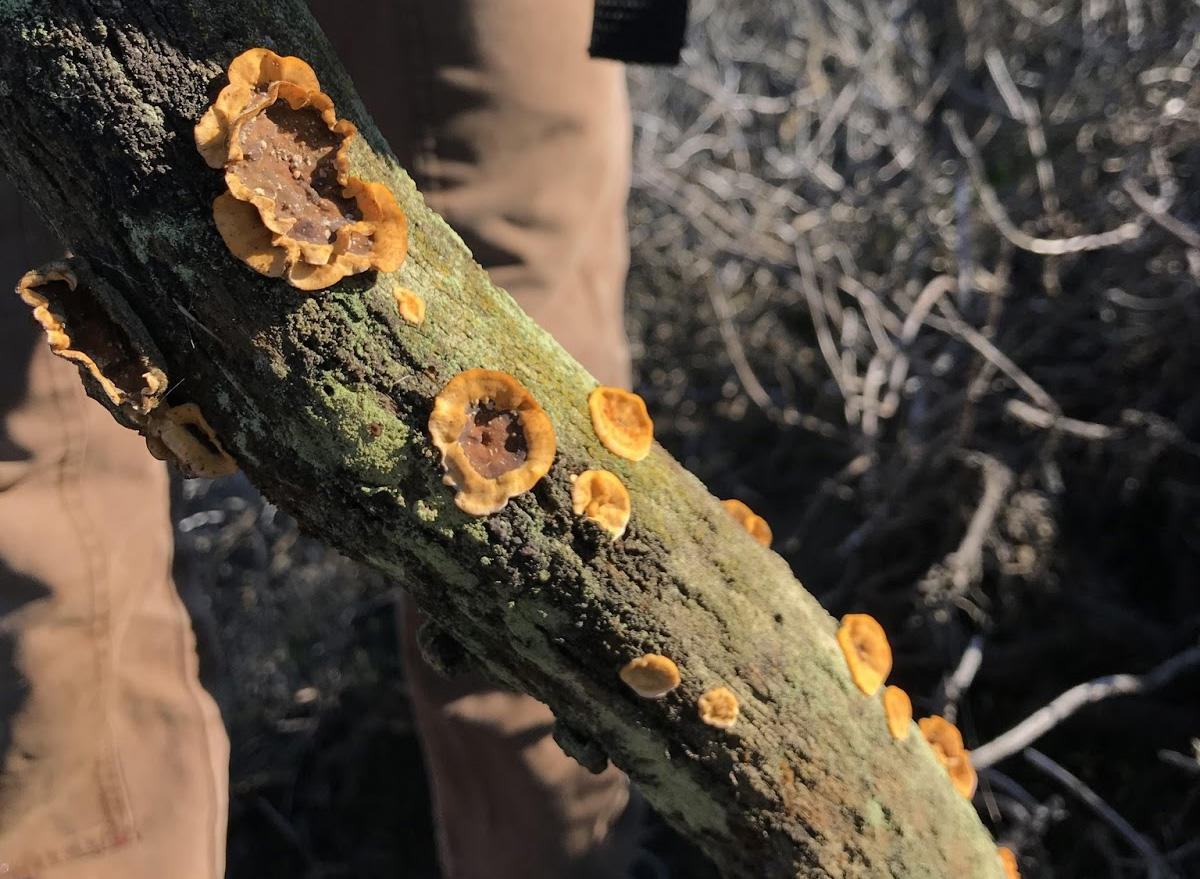 This unfortunately-named fungus is also known as a false turkey-tail since it is often confused with a turkey-tail mushroom when viewed from above. We found this during our winter BioBlitz at Fort Funston! This kind of fungus can act as a pathogen for peach trees, but otherwise acts as a decomposer for trees with hard bark such as conifers. 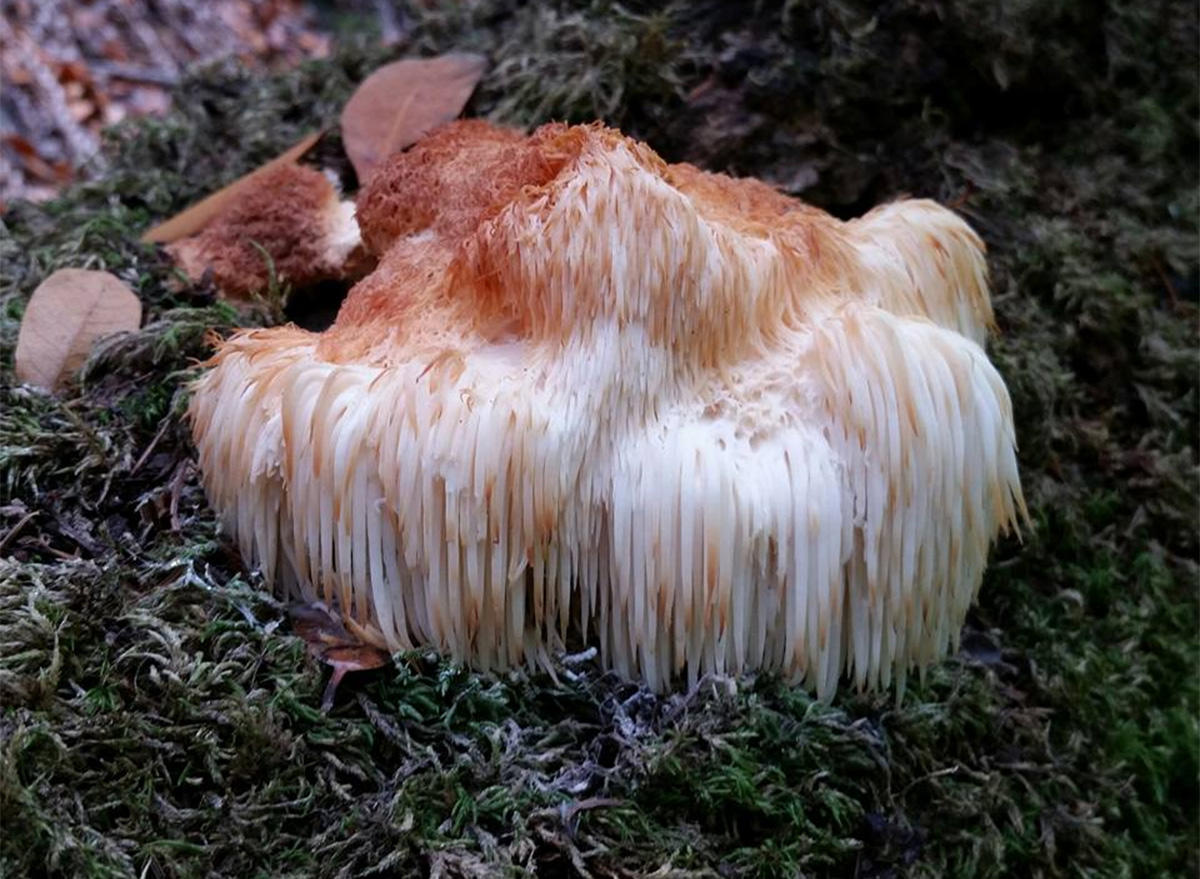 Our colleague David Greenberger, who works in the Marin Headlands, found this fungus on Mt. Tamalpais recently. Aside from looking gorgeous, this fungus is also currently being tested for its medicinal properties. It’s believed that it may hold the key to regenerating brain function to aid patients with Alzheimer's disease.

When most people think of algae, they think of an organism that is closely related to a plant and lives in the water. Though this is largely true, algae is one of those all-encompassing terms that doesn’t have an exact definition, but can be used to categorize a large variety of organisms that belong to the kingdom Protista. One fact that is agreed upon, however, is that algae use photosynthesis to convert sunlight into energy and algae do not have the same structure as plants, i.e. they lack leaves, stems, etc. Most algae can be broken up into three groups: cyanobacteria, green algae, and red algae. What differentiates these groups is the kind of chlorophylls they use to conduct photosynthesis. Though many algae are single-celled creatures that are too small for us to see, algae are complex and important organisms that create up to 80 percent of global oxygen. Though algae may seem otherworldly at first, we can see examples of algae throughout our parks almost every day! 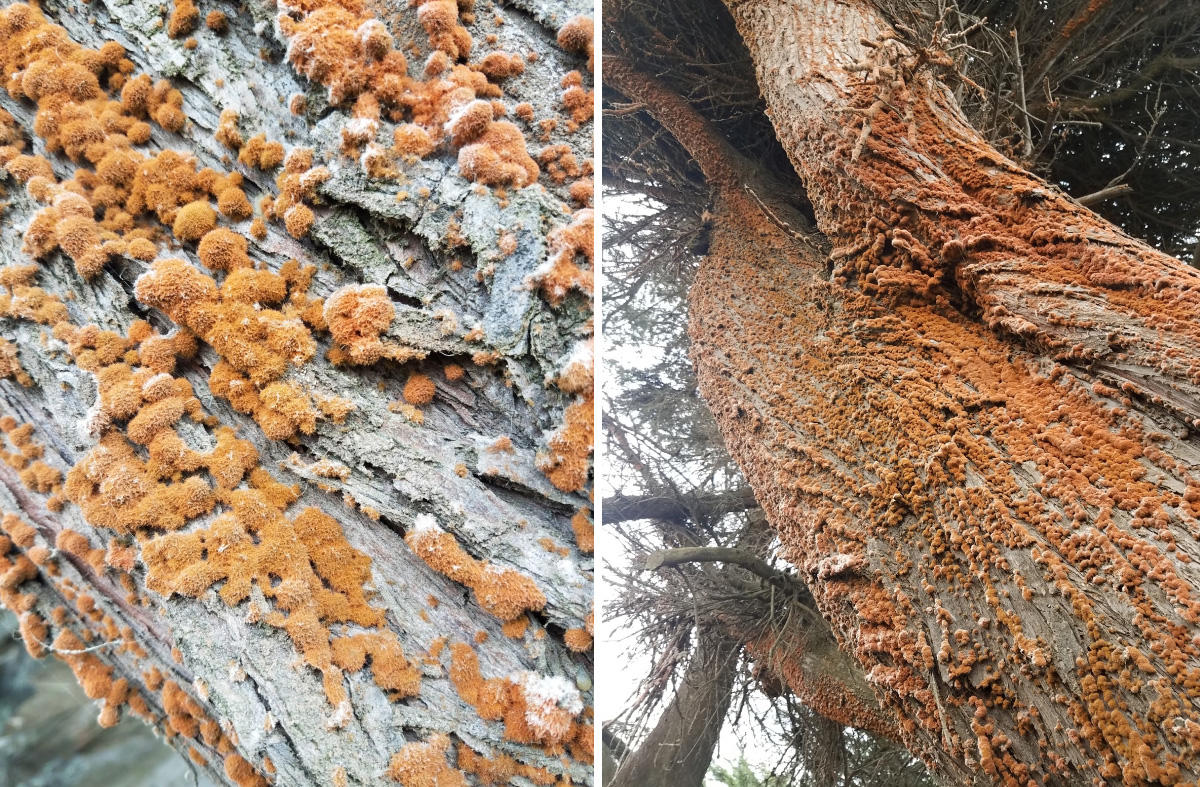 Next time you’re at Lands End, look up across the parking lot into Sutro Heights Park. You may see a tree that has orange bark and think: What kind of tree is that? Trick question! It’s actually just a regular cypress tree that’s covered in Trentepholia, a type of terrestrial algae. Like we said, “algae” encompasses a huge variety of organisms and not all algae is marine or aquatic. We found this same type of algae at Fort Funston (above) too! This type of algae thrives in temperate coastal environments, just like San Francisco, and is actually a type of green algae. The reason for its bright orange color is because it produces a large amount of carotenoid pigments which mask the greens in its chlorophyll. 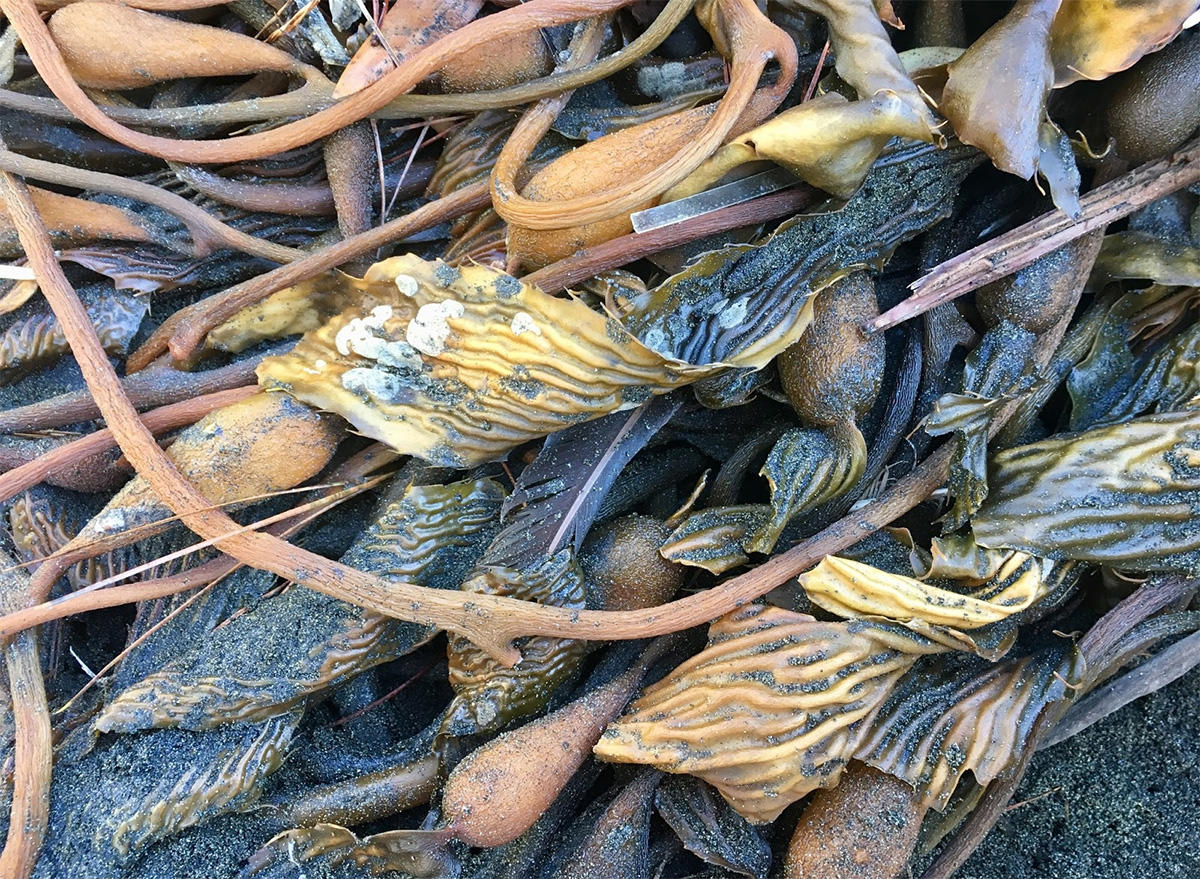 Giant kelp, yes. It’s an algae and there’s an entire forest of it right along our coasts. We often find this species washed up along our beaches since all of San Francisco’s National Park sites are coastal habitats. This picture was taken by the National Park Service’s Michael Chasse, along Ocean Beach during our most recent winter BioBlitz. Giant kelp can grow up to 150 feet tall, stretching from the rocky ocean shelf to the surface. One of this species’ greatest predators are spiny sea urchins, which like to feast on kelp holdfasts. People also harvest this species as it is a great source of iodine and rather tasty.

We’ve covered fungi and algae, but what lies at the beautiful intersection of these two kingdoms? That’s right: Lichen. Individual parts of a fungi’s mycelium are called hypha and when cyanobacteria (a type of algae) live among these hypha, you get lichens! This symbiotic species generally grows on rocks and trees, but they’re just as diverse as algae and fungi can be. They’re able to grow in a countless number of forms, with the three most found being fruticose (tiny, bushy structure), foliose (flattened and leaf-like), or crustose (crusty and flat). Lichens also come in a variety of colors depending on moisture content. If lichen is present, it generally means the ecosystem is healthy and thriving as they are sensitive to pollution and rapid environmental change. Safe to say, we’re likin’ these lichens in our parks! 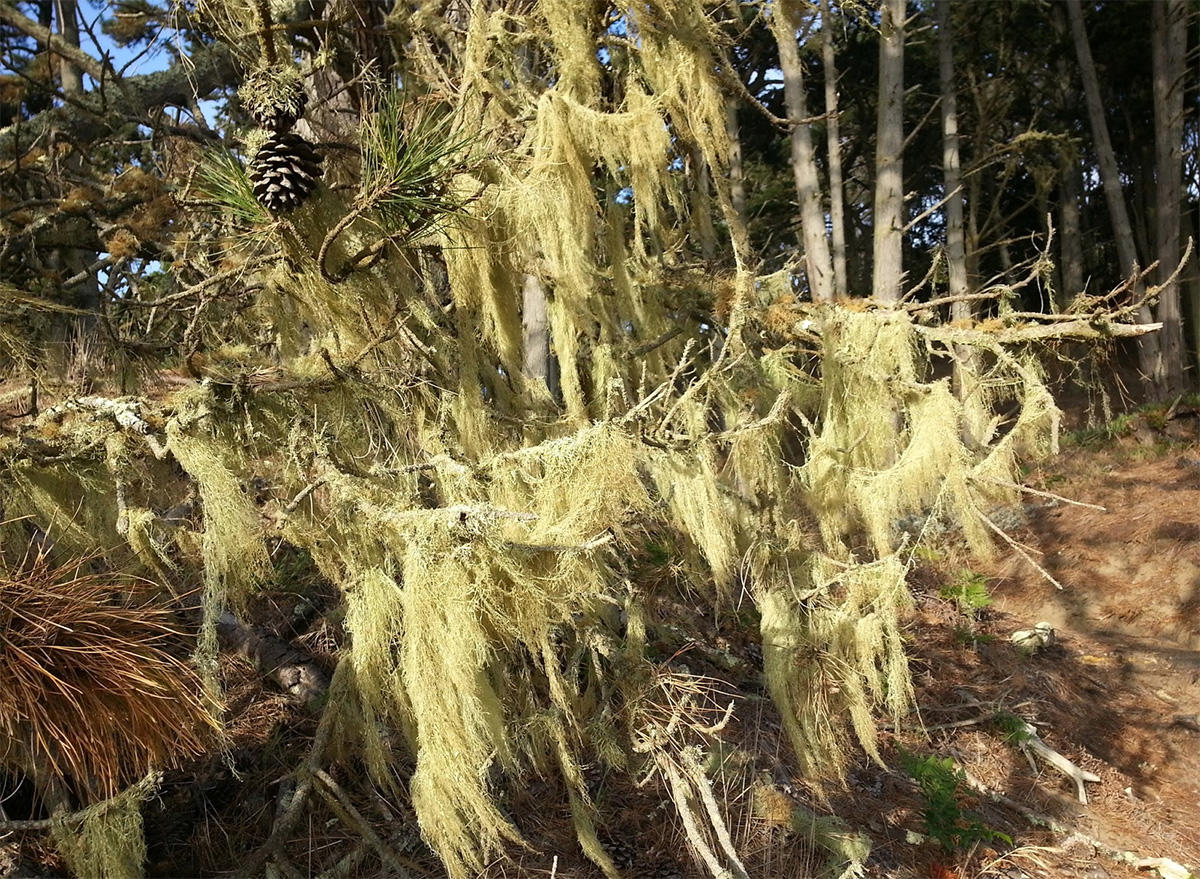 Lace Lichen is the state lichen of California and this particular picture was taken by Michael Chasse in the Presidio. Its net-like appearance is unlike any other lichen and it is an important source of food for deer and nesting material for birds. 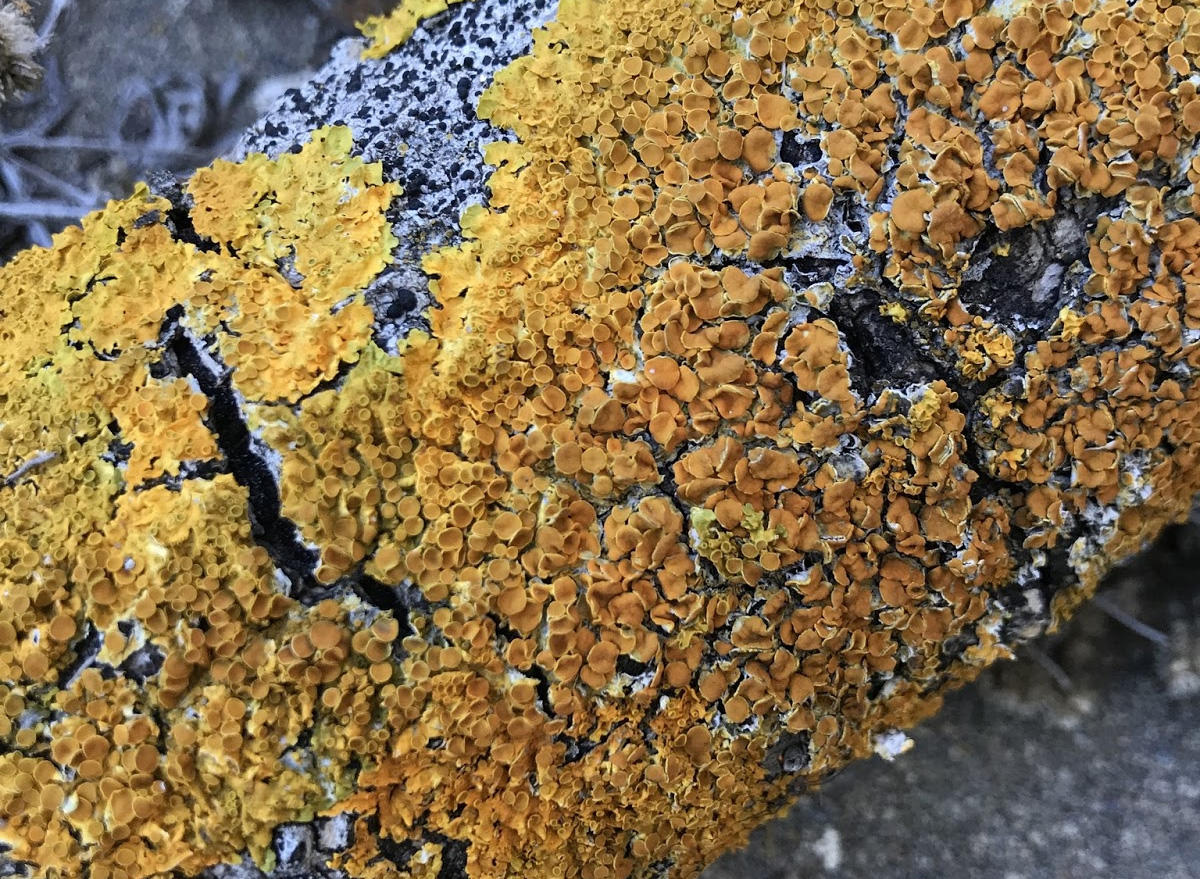 This foliose lichen can be found on hard surfaces like walls and rocks. Unlike many lichens, this species is very hardy and can tolerate high amounts of air pollution. Thus, biologists use it as an indicator species for air quality. One of our colleagues found this patch right outside our office building in the Presidio!

So next time you’re on a stroll through Lands End, Fort Funston or the Presidio Coastal Bluffs, see if you can take a moment to find and appreciate some of these underappreciated friends we have in our parks. Even if you can’t spot them, know they’re quietly doing their job to create a happy and healthy park.